Catalonia wants out; Spain says no

The unsuccessful fight for a separate republic has worn down the supporters. Only 44.5 percent of Catalans are currently in favour of a separate state. Many of them are frustrated because their leaders promised rapid independence for years - and then failed to deliver.

In the election, the separatists might just manage a majority despite the rise of the socialists. But what they would do with power they themselves do not know. The left-wing republicans are counting on negotiations with Madrid, the more radical camp around Puigdemont and Sànchez on confrontation.

Sunday's vote is therefore a landmark. The party that prevails on Sunday will want to determine the course of the next few years. At the heart of the matter is one question: do the separatists de-escalate the conflict with Madrid - or do they take another run at it?

The far-right Vox Party will enter Catalonia's regional parliament for the first time, winning 11 seats. The conservative People's Party is only expected to receive three seats.
1 Reply
1
Reply Tue 16 Feb, 2021 01:33 pm
@Walter Hinteler,
Catalonia’s regional elections told two stories. The headline is the Socialists (PSC) won the most votes - a win for the Spanish Prime Minister. However, the pro-Independence parties secured over 50% of the vote and seats - up from 2017. 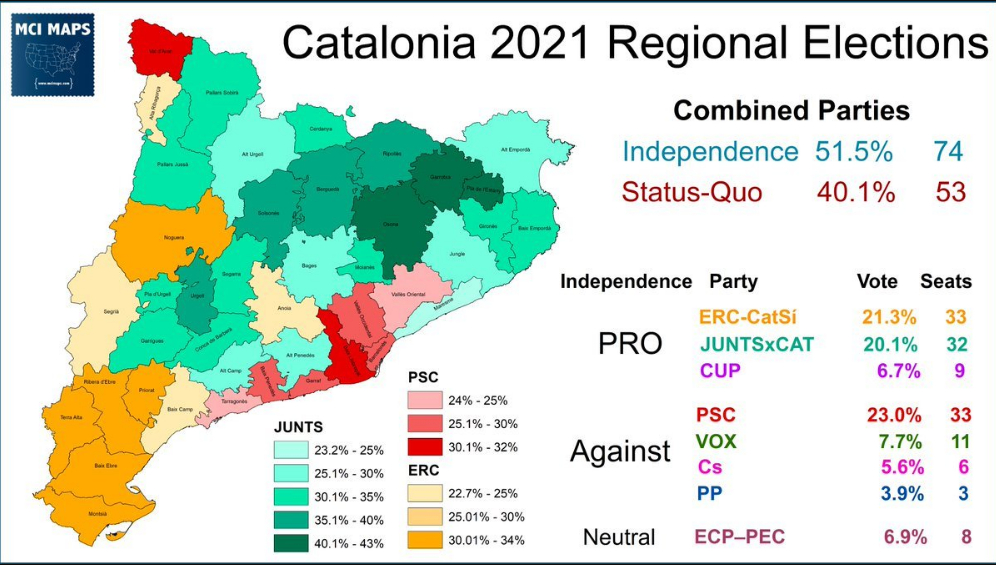 1 Reply
1
Reply Tue 9 Mar, 2021 07:18 am
@Walter Hinteler,
The European parliament has voted to lift the immunity of the former Catalan president Carles Puigdemont and two of his ministers, taking them a step closer to extradition and prosecution in Spain.

MEPs voted by 400 to 248 with 45 abstentions in the case of Puigdemont and 404 to 247 with 42 abstentions regarding Antoni Comín and Clara Ponsatí, respectively the former health and education ministers in Puigdemont’s government.
1 Reply
1
Reply Tue 9 Mar, 2021 11:51 am
@Walter Hinteler,
There are formal reasons why the Parliament decided to lift the immunity:the criminal proceedings began before the three were elected to the European Parliament and the charges were "clearly unrelated" to their activities as MEPs, the decisions say.
Puigdemont said on Tuesday that this was "a sad day" for the European Parliament: "This is a clear case of political persecution." His lawyers are considering appealing the decision to the European Court of Justice.

However, the trio per se has a good chance of not being extradited:
a Brussels appeals court ruled two months ago that Lluís Puig - another former member of the Catalan regional government - does not have to be extradited. Belgian prosecutors decided not to challenge the ruling, which means Spain's request is likely to be finally rejected. The judges argued that because of the heated atmosphere, the presumption of innocence was in danger.
So it is to be expected that this will also happen here.
0 Replies
1
Reply Fri 21 May, 2021 10:51 am
Moderate separatist Pere Aragones named new leader

Harvard-educated lawyer Pere Aragones pledged to keep pushing for an independent Catalonia, pointing to Scotland's 2014 referendum approved by the UK as a positive example.

The 38-year-old lawyer called for "immediately" restarting independence talks with Madrid, which have been suspended due to the pandemic. At the same time, he signaled a more moderate course than his predecessors.

The London-approved independence vote ended with Scotland choosing to stay in the United Kingdom, although calls for another referendum have since grown louder, primarily because of Brexit.

Who is Pere Aragones?
The new Catalan president comes from a family of industrialists and hotel owners. He joined the Republican Left of Catalonia (ERC) party as a teenager and became a regional lawmaker at the age of 24, moving into government six years ago. Aragones also completed a part of his education at Harvard University.

He is the most senior ERC leader who is not in jail over the region's unilateral independence bid in 2017. On Monday, Aragones called for amnesty for Catalan leaders who have been jailed or exiled over the dispute.

However, the new Catalan president said he would not reassert the independence claim until there was more support among the voters. The wealthy region of over 7.5 million people remains almost equally split on the issue in opinion polls. The ERC placed second behind a pro-union Socialist party in the February election, but separatist groups combined still managed to secure an overall majority.

How did Madrid react?
The Spanish government, led by Pedro Sanchez, remains firmly opposed to both the referendum and the amnesty for separatist leaders. On Friday, Sanchez congratulated Aragones and pledged to work together reconciliation between Catalonia and the rest of Spain.

On Sunday thousands of people, among them the leaders of the three parties on Spain’s right, will once again gather in the Madrid square that boasts the world’s largest Spanish flag to protest against the Socialist-led government’s handling of the Catalan independence crisis.
[...]
The question of pardoning the Catalan leaders remains deeply divisive in Spain, a fact not lost on opposition parties and many people in Sánchez’s Spanish Socialist Workers party (PSOE). A recent poll for El Mundo found that 61% of those surveyed did not agree with pardoning them, while 29.5% backed it.

Although the government will have the final say, Spain’s supreme court issued a non-binding report opposing the pardons last month, saying the sentences handed out were appropriate and noting those convicted had not shown “the slightest evidence or faintest hint of contrition”.

Sánchez, however, insists the pardons could be the best way to cool enduring tensions and move towards a political solution to the territorial impasse. “I do understand that there will be people who have objections to the decision the government might make – especially after the events of 2017,” the prime minister said on Wednesday. “But I ask them to put their trust in us because we need to work on coexistence … Spanish society needs to move from a bad past to a better future – and that will require magnanimity.”
... ... ...