MILLAU, France, Dec. 1, -- A bridge officially designated the tallest in the world was inaugurated by President Jacques Chirac in southern France Tuesday -- a spectacular feat of engineering that will carry motorists at 885 feet above the valley of the river Tarn.

Before an audience of around 1,000 people including architect Norman Foster, Chirac unveiled a plaque by the largest of the bridge's seven pillars which rises to 343 metres above ground level. French air-force jets swept by overhead.

The Millau motorway viaduct stretches for 1.6 miles between two plateaux in the Massif Central mountain range and when it opens to traffic Thursday it will remove one of the country's most notorious bottlenecks.

Unusually for such a large infrastructure project in France, the bridge's 520 million dollars cost was financed entirely by the private sector, with the construction giant Eiffage getting the right to collect tolls for 75 years in return.

Like a taut thread pierced by a line of needles, the silhouette dominates the countryside for miles around and has been praised as a classic marriage of aesthetics and science. More than 60,000 people have already paid for tours of the construction site.

"A work of man must fuse with nature. The pillars had to look almost organic, like they had grown from the earth," Foster said in a special edition of the local newspaper Midi Libre. 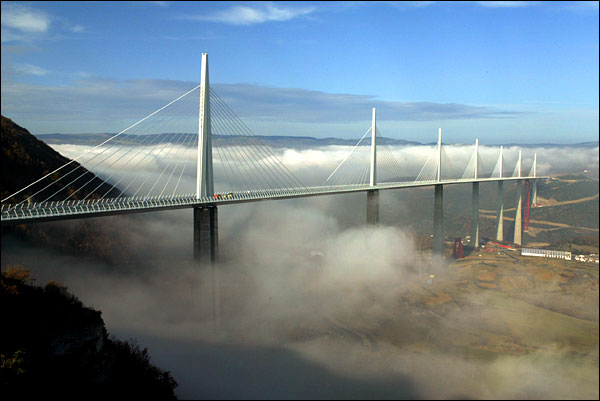 I get a shiver when I look at that bridge.
0 Replies
1
Reply Wed 15 Dec, 2004 10:33 pm
I do too, but I get one with a lot of bridges and overpasses, in particular an overpass of 105 that goes to LAX. I haven't looked hard enough at all the available photos and diagrams to tell, though, if one feels protected by the side of the Millau viaduct (it isn't just a flat road, heh).

I do remember driving up 280 along the SF peninsula one densely foggy morning and going over a relatively small bridge in a slowly moving traffic jam, nearly bumper to bumper in several lanes, with a total sense of being In Air, eek.

I have crossed the Golden Gate many times and it seems to me that each time is a different experience, some of that having to do with me, at the time, but mostly to do with the atmospherics. I never feel less than some kind of glory, even if I am preoccupied re other considerations.

Seems I should post a bunch of group photos of a2kers at the Golden Gate - I edited those from SF a2k-meet photos since we all looked entirely windblown. But... I'll dig a photo up one of these days and post, probably long after this thread has passed into oblivion.
0 Replies
1
Reply Fri 24 Dec, 2004 02:04 am
ossobuco wrote:

Walter, I've looked at a lot of links re the viaduct, but hadn't see that one before, thank you very much.

Well, as said - that's the official site :wink:
(Online for a long time, btw, showing e.g. all the progress during the planning and building periods.)
0 Replies