Senior bibliographer from the Library of Congress, Miss Lynn E. Catoe wrote the government document, UFOs AND RELATED SUBJECTS: An Annotated Bibliography, and summarizes her findings. She wrote, "A large part of the available UFO literature is closely linked with mysticism and the metaphysical. It deals with subjects like mental telepathy, automatic writing and invisible entities as well as phenomenon like poltergeist manifestation and possession. Many of the UFO reports now being published in the popular press recount alleged incidents that are strikingly similar to demonic possession that have long been known to theologians and parapsychologists."

We know them by their works:

Mathew 7:16. You will know them by their fruits. Do men gather grapes from thorn bushes or figs from thistles?

Because it is sometimes so unbelievable, the truth escapes being known. Heraclitus (500 B.C.)

"Also known as Jedi, or Nephilim"

"Who were the Annunaki? They were the Watchers, Watchmen assigned to earth to watch over Yahweh's Creation in the Garden of Eden and Earth . They were created by God as perfect Angels. These Watchers rebelled against God and their assignment and a mutiny followed as they abandoned their mission to oversee humans and began to defile the women of the earth by having offspring with them. This led to a giant defect in the DNA of the offspring and an eventual almost complete contamination of the human DNA. By the time Yahweh destroyed the world with a flood because of this contamination, only one family on earth was left with pure human DNA. But even after the flood, the Watchers kept revolting and even more were punished and cast out of heaven losing their first estate and habitation, as they continued to defile women and human DNA (Genesis 6:4) This hybridization and corruption of the human DNA is still very much a part of our world although the giant defect has been corrected and most hybridization goes undetected. Why is the church silent on UFOs, Aliens, abductions, implantations, and forced breedings?"

Genesis 6:4. There were giants on the earth in those days, and also afterward, when the sons of God came in to the daughters of men and they bore children to them. Those were the mighty men who were of old, men of renown.

NKJV Scholastic Commentary: The sons of God refer to a different group from either the men or their daughters. The phrase clearly means "angels." Job 1:6 presents Satan and his angels coming into the presence of the LORD for an audience with His Majesty. Satan's angels are there called "the sons of God," with the suggestion that these angelic beings were ounce holy ones who served the Lord, but were now allied with the evil one. Genesis assumes the existence of the good angels of the Lord (see 3:24) and of Satan and his angels, it also assumes that the later are already fallen and under God's judgment (see 1:2). In 3:1, the serpent (Satan) was already as the father of lies (John 8:44). Here it appears that some of Satan's angels, spirit beings, took on human form (see 3:24) and, out of a perverted lust, seduced women. In response, God reserved these angels for special judgment (2 Pet 2:4; Jude 6) and cleansed the earth itself (with the Flood).

2 Corinthians 2:11. in order that Satan might not outwit us. For we are not unaware of his schemes. 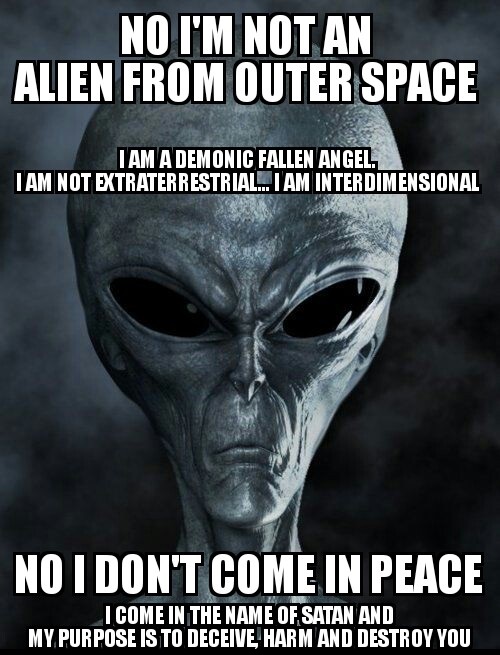 I have seen an angel three times - wings and all.


Really? How many psychiatrists have you seen?

Angels just show themselves to those who believe in them, (those bastards!)
0 Replies
0
Reply Fri 2 Dec, 2016 01:25 pm
UFO/aliens are a world wide phenomenon. Many countries have released some of their classified files as well as a portion in the US due to the Freedom of information act. Governments have taken this very seriously. In one of the US files you have a plane chasing a UFO over Iran and trying to fire on it but it would not fire. There are also several people in respectable positions like the former minister of defense for Canada, astronauts, people with nuclear launch codes and responsible for nuclear silos, air traffic controllers, pilots, all people that are very hard to doubt claiming they exist.

Jung came to the conclusion that UFOs were examples of the phenomena of synchronicity where external events mirror internal psychic states. As usual, he saw the UFO situation in a broader perspective than most. For Jung the UFO images had much to do with the ending of an era in history and the beginning of a new one. In his introductory remarks to Flying Saucers he writes about the UFO events:


"As we know from ancient Egyptian history, they are manifestations of psychic changes which always appear at the end of one Platonic month and at the beginning of another. Apparently they are changes in the constellation of psychic dominants, of the archetypes, or 'gods' as they used to be called, which bring about, or accompany, long-lasting transformations of the collective psyche. The transformation started in the historical era and left its traces first in the passing of the aeon of Taurus into that of Aries, and then of Aries into Pisces, whose beginning coincides with the rise of Christianity. We are now nearing that great change which may be expected when the spring point enters Aquarius."
In a similar manner that the medieval alchemists projected their psyche into matter, Jung felt that modern man projected his inner state into the heavens. In this sense, the UFOs became modern symbols for the ancient gods which came to man's assistance in time of need.

The need perhaps was for wholeness again out of the increasing fragmentation of the modern world. In the early 50s and the beginning of the Cold War, when UFOs began to infiltrate popular culture, there was a great fragmentation in the world. Jung writes, "At a time when the world is divided by an iron curtain...we might expect all sorts of funny things, since when such a thing happens in an individual it means a complete dissociation, which is instantly compensated by symbols of wholeness and unity." It was very relevant to Jung that the shape of the flying saucers was round, the shape of the ancient Mandala, symbol of wholeness throughout history.

The UFO events of the 50s which Jung turned his focus on have certainly not gone away. In fact they seem to increasingly dominate contemporary American popular culture. In the almost half century along the way they have gone a long way towards creating and boosting the literary/film/television genre of science fiction, as well as creating a huge marketing empire and a division in culture between the believers (contactees) and non-believers.
0 Replies
1
Reply Sat 3 Dec, 2016 07:08 am
I have had encounters with aliens.

My story begins one night while laying awake in bed. I was accustomed at this time in my life to seeing and hearing spirits. A knowing spirit with powers recreated from memory the sound of a spacecraft and teleported an alien in spirit to my bedside. The alien spirit spoke in a highly technological sounding language. Upon recognizing that I could not understand him, he said the word "human" and then vanished. It is my belief that a knowing angelic being did this to inform me that I would be or have been paid a visit by this alien in body arriving in a spacecraft. I believe this encounter was to collect my DNA for cloning.

A few years later my wife and I had seen my doppelganger (spirit-double). The lowly dead of the spirit world called it a clone. Then it was revealed to me by a much higher being that I had truly been cloned. As I laid awake in bed, a progression of spirits in the cloning process had laid upon me. About five in total with the first having the most slim covering its’ bodily form and its’ mouth filled with a thick mucus-like substance. They appeared to have been in a vat of a thick gel-like substance.

This next encounter was a physical one. I was running a fever one night and sleeping. I hadn't had a fever in years and it was no coincidence that I was running one this night. My wife and I had the fan blowing up our noses and could easily smell things in the room. My fever began to suddenly rise and I began squirming in bed violently. I was awakening when I smelt their scent. They smelt as though they come from the water. Although I did not see them, there was an obvious alien presence in the room. They quickly vanished from the bedroom and their scent went away. My wife later said that she felt something pulling on her legs and smelling sulfur. This scenario brings to mind the Legend of the Doppelganger. Legend has it that if a person sees their own doppelganger (spirit-double), it means imminent death. I believe that the aliens were there to harm me that night and my protector Father God or Jesus had intervened by making my fever go up, chasing them away and saving my life.
0 Replies
1
Reply Sun 4 Dec, 2016 07:47 am
And so I urge you, go after experience rather than knowledge. On account of pride, knowledge may often deceive you, but this gentle, loving affection will not deceive you. Knowledge tends to breed conceit, but love builds. Knowledge is full of labor, but love, full of rest. - The Book of Privy Counseling
0 Replies
1
Reply Sun 4 Dec, 2016 08:26 am
Yeah, them bible-thumpers don't like people to get too knowledgeable--they might start to ask questions.
2 Replies
2
Reply Sun 4 Dec, 2016 10:00 am
@Setanta,
Agreed. Just breathe in the opium of the people and let the world go by.....until the latest victim is you.
0 Replies

How can we be sure that all religions are wrong? - Discussion by reasoning logic
What if no religions are correct, but there still is a God? - Question by neologist
We are all like little children who often say: "Mom, Dad, leave me alone, I want to be on my own". - Question by Leaffan
Beyond tribalism; How well does your religious label serve you? - Discussion by MattDavis
Is religion responsible for the opposition to peace in the Israel-Palestine conflict? - Question by maxdancona
Concern for Religious Freedom or Preaching Political Messages? - Discussion by wandeljw
Why believe in god? The theist perspective. - Discussion by msolga
Why People Seek Solace In Gods. - Question by mark noble
Catholic remarried couples should abstain from sex - Question by Tes yeux noirs
How can a good God allow suffering - Question by SawyerMentink
Religion and Fear - Discussion by TomTomBinks
Copyright © 2023 MadLab, LLC :: Terms of Service :: Privacy Policy :: Page generated in 0.04 seconds on 02/07/2023 at 01:25:24
▲ ▼