Ecclesiastes is an interpretation of natural death in the Hebrew picture language way of putting things. We have the means to delay many of those things today. Science moves on. The Bible does not. There's no reason to suppose any divine being put breath into man. Religion formed at the beginning of time when man had no answers. Now we do.
1 Reply
0
Reply Tue 3 Jan, 2017 08:51 am
@trevorw2539,
The breathe of life is the work of the Holy Spirit. God has brought about life through His Spirit since the beginning of time. We could not breathe a single breath in this world without Him.

1 Corinthians 12:3. Therefore I want you to know that no one who is speaking by the Spirit of God says, "Jesus be cursed," and no one can say, "Jesus is Lord," except by the Holy Spirit.

We would not have life if it weren't for the Holy Spirit. And we could not utter a single word for or against God without the breath of life.

Both good and bad are done through God's Spirit. You are reading what I have written now through His Spirit.
0 Replies
1
Reply Fri 10 Feb, 2017 09:02 am
Evidence of God parting the Red Sea through Noah.

Evidence of God parting the Red Sea through Noah. 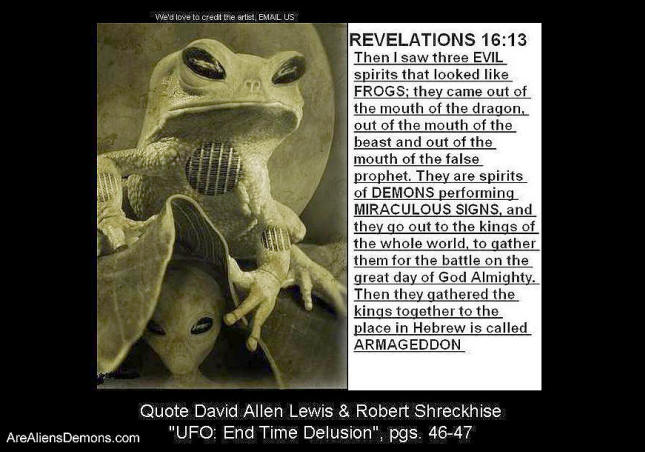 From the book, UFO: End-Time Delusion

“In Chapter Sixteen it speaks of three alien beings who go forth to deceive the rulers of the Earth. [The three aliens in Revelation Sixteen have an amphibian or reptilian appearance... So here we read about three frog-like unclean spirits… They are not actually frogs, but “like” frogs. Probably that describes their alien features or appearance..." David Allen Lewis & Robert Shrekhise UFO: End-Time Delusion pg 46-47

Their description is of these frog-like entities leading the kings of the earth together, prior to Christ’s return, preparing for the battle of Armageddon. If this passage is referring to the alien deception, and time will tell if it is or not, but if so, the alien deception will be an even more major part of the End Times Strong Delusion which the Bible speaks of, more so than many Christians already believe it is.

In February 1995 the American TV show 'Hard Copy' broadcast a videotape showing an unidentified object flying over a North American military test range. Further footage was shown the following December on the 'Sightings' TV show. The videotape had apparently been filmed by a high-tech Air Force surveillance camera at an undisclosed location within the Nellis Air Force Base Bombing and Gunnery Range Complex in Nevada, often referred to as the Nellis Test Range. Some of our readers may be familiar with this footage and some may not. It's sort of the "Winnebago Man" of UFO videos. Everyone out there has seen it at one point or another, and everyone unanimously agrees that it's completely bizarre. The fact that it is actual military footage and it's been verified and vetted by multiple researchers puts this in a class by itself. The videotape is said to have been smuggled out by a contractor who had previously operated radar tracking stations on the Nellis range. Copies of the videotape were sold to Paramount Studios (producers of 'Hard Copy' and 'Sightings') by a former Air Force employee, although apparently he had not witnessed the object himself.

Two sections of videotape showing the UFO have come to light. The first section was filmed from a location known as S-30, according to the camera's data display. This shows the object initially as an indistinct 'blob' flying in front of a distant mountain range, before it turns and heads towards the camera location. The camera operator struggles to keep the object within shot as it approaches, and it soon becomes clear that it's a morphing object with four distinctive 'lobes' and a dark region at the front. As it nears, it turns to face the tracking station for several seconds, as if performing some kind of surveillance, before it turns away and departs. This footage is of special importance because the voices of the camera operators at the tracking station can be heard on the noisy soundtrack. Their bewilderment at the unexpected appearance of the UFO is clearly audible. "What the hell is it?" one of them says; "Where'd it come from?" asks the other. For in-depth analysis of this footage, take a look at Martin J. Powell's excellent breakdown here http://www.aenigmatis.com/nellis-ufo-video/part-one/nellis-1.htm

Source: https://theobjectreport.blogspot.com/2014/07/the-top-20-most-significant-pieces-of.html
2 Replies
1
Reply Thu 23 Feb, 2017 10:17 am
@Patches,
Not enough background info there. Hard to make any judgement on what that was. It appears to be infrared photography (at night) which makes it doubly difficult to interpret . If that is the case, what we are 'seeing' in the footage is just relative differences in temperature, not an actual image.

It would help to know what the bright object it appeared in front of was.
0 Replies
1
Reply Thu 23 Feb, 2017 04:37 pm
@Patches,
Probably a larger test version of one of these:

The main point being, there's lots of crazy stuff flying around out there, especially over military test bases, so it's going to take a lot (a whole lot) more evidence than a fuzzy video to convince any reasonable person of anything. At least it should. Anyone who is convinced by a grainy video like the one you posted, is a gullible fool.

Evidence of God parting the Red Sea through Noah.

Noah didn't part the Red Sea... not even in the Bible myth.

If you believe that you have no interest in the Truth. The facts do not support it.


Izzy, patches is nuts. Dont waste your intellect on challenging his delusions.
1 Reply

How can we be sure that all religions are wrong? - Discussion by reasoning logic
What if no religions are correct, but there still is a God? - Question by neologist
We are all like little children who often say: "Mom, Dad, leave me alone, I want to be on my own". - Question by Leaffan
Beyond tribalism; How well does your religious label serve you? - Discussion by MattDavis
Is religion responsible for the opposition to peace in the Israel-Palestine conflict? - Question by maxdancona
Concern for Religious Freedom or Preaching Political Messages? - Discussion by wandeljw
Are atheists being more illogical than agnostics? - Discussion by igm
Why believe in god? The theist perspective. - Discussion by msolga
Why People Seek Solace In Gods. - Question by mark noble
Catholic remarried couples should abstain from sex - Question by Tes yeux noirs
How can a good God allow suffering - Question by SawyerMentink
Copyright © 2022 MadLab, LLC :: Terms of Service :: Privacy Policy :: Page generated in 0.03 seconds on 01/21/2022 at 07:46:53
▲ ▼