Toddler dragged under water at Disney by alligator

Forums: Alligator, Disney, Toddler, News
Email this Topic • Print this Page
1
Reply Thu 16 Jun, 2016 05:48 pm
@Finn dAbuzz,
One of those two things are true.
0 Replies
2
Reply Thu 16 Jun, 2016 06:13 pm
@ehBeth,
Ditto.
1 Reply
3
Reply Fri 17 Jun, 2016 03:56 pm
@chai2,
Th Hotel next door on the same lagoons DOES have a "No swimming-alligators" sign"
If Disney is doing a "mort" analysis and consciously making this as a business decision, then the courts should award the plaintiffs a "make it hurt till they get it" significant portion of the corporate income .

Then, the several decision makers at Disney should serve some time for this act of wanton neglect.

2 Replies
1
Reply Fri 17 Jun, 2016 04:01 pm
@farmerman,
Making Disney "hurt" is a huge amount. Obviously they have calculated they can weather all hurts because they are willing to throw enormous amounts at the plaintiffs to settle.

This family has two other children. If offered $50 million will they turn it down in hopes that a jury will award billions that will be tied up in appeals for decades?

It's the way these things work.
1 Reply
2
Reply Fri 17 Jun, 2016 04:19 pm
@farmerman,
Disney removed alligators from the pond, and they still didn't understand the dangers?

2 Replies
1
Reply Fri 17 Jun, 2016 04:27 pm
@cicerone imposter,
Of course they do, and they can't ever be certain that alligators will inhabit the lagoon due to the geography and the locomotion of the reptiles.

Apparently Disney has calculated that the overall cost of such signs is unacceptable.

There are no mysteries here other than the one that involves people feeling more sorry for the alligators than this poor family.
0 Replies
3
Reply Fri 17 Jun, 2016 04:42 pm
@cicerone imposter,
cicerone imposter wrote:

Disney removed alligators from the pond, and they still didn't understand the dangers?

Maybe they thought alligators weren't part of their image - out side of Peter Pan, of course.

Then again, they might have figured enough alligators might scare people away from their pristine lagoons. Surely, you have been exposed to corporate thinking by this time.
0 Replies
3
Reply Fri 17 Jun, 2016 06:26 pm
Just came across this, thought it was pretty powerful in terms of the norm there (and what Disney knew about how people use that area):

Just one of the pics: 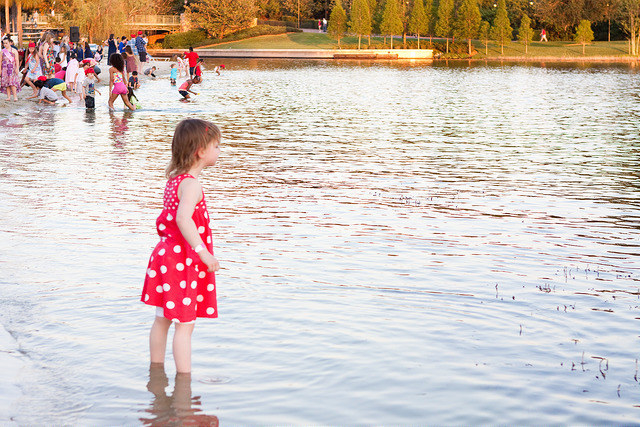 0 Replies
1
Reply Fri 17 Jun, 2016 08:08 pm
@Finn dAbuzz,
There are other ways to "hurt" a corps image than just by mere weight of dollars offered. Taking say, a 50 million settlement without it being sealed and accompanied by a victim impact statement to the court and to the Disney decision makers (of this particular corporate policy), would be a start. Followed by a court directed apology for willfully causing the death of the child by the corps depraved neglect. Id be satisfied because hearing what the parents (or a designated deliverer) actually say to the court out in the open in front of the public and the press would help start a healing process and be awarning for every following vacationing couple or family that this feeling of comfort and safety that was "marketed" by Disney, was just that, marketing bullshit.
2 Replies
2
Reply Fri 17 Jun, 2016 10:54 pm
@farmerman,
We were in Disney World not long after the Grand Floridian opened. We stayed at the Polynesian which shares shoreline on that Lagoon. At that time there were no "no swimming signs" posted. We could walk thru the sliding glass doors right to that inviting white sand beach and lounge chairs and beach chairs were available to the guest. Florida is hot (surprise) and the kids splashed around in the water, many of the adults sat on chairs or lounge chairs in the water to keep cool. There were speed boats and water skiers on the Lagoon and "Goofy arrived via water skis to the beach and surprised the kids, they loved it. Frankly, it was a lot of fun and Disney provides everything for a steep price.

Everything is deigned to make you comfortable and entertained during your stay. It's beautiful, it really is. Tons of pretty good restaurants, pop up entertainment "barber shop quartets" appearing on the street and everything is very clean. It's not a nature preserve, I think most people understand that, its sheer comfort and fun.

We always stayed in the Park because you could catch the monorail, and they also provide an impressive amount of transportation to take to the other sites. All clean, on time, very reliable. If parents aren't thinking about the threat of alligators, I understand. Its designed to make you comfortable.

Disney needs to fix this, and it crushes my soul to think a small boy could be dragged away by an alligator and his parents had to watch. The child paid the ultimate price because Disney chose to offer a mirage instead of basic safety advice. The idea that the parents should be to blame is outrageous. The
alligators did what alligators do, and it's Disney's fault that so many will be destroyed. The fact that they pulled out 5 or6 gators after the child was taken speaks volumes about Disney's stewardship.

Thankfully a few others have acknowledged that a terrible thing happened in Florida. I was beginning think I live in the Twilight Zone. Big thank you to farmerman.
2 Replies
4
Reply Sat 18 Jun, 2016 04:07 am
@glitterbag,
as many times Ive been to Orlando, I always play "Spot the alligators" when we arrive at the airport and ride that skytrain from the runways to the main terminal . You pass over several joined "sinkhole lakes" with neat round edges and you have to look carefully but Ill bet I usually see ten or more of the things in the water or along the banks.

We were in Nawlins till Thursday this week and in the Metarie area theyve had alligators showing up in the last 10 years or so. Alligators are even evolving into a "cold weather" variety and so they expect them to migrate north.
They are a very uccessful breed of animal with a really great fecundity and they adopt a multi edged plan for survival of their young
1They lay a lot of eggs once a year
2they actually "mother" their young by protecting the little peeps.

Of course you're right but how often do such things happen? It could happen here, but the odds are against it.
1 Reply
1
Reply Sat 18 Jun, 2016 12:01 pm
@glitterbag,
These are the kinds of situation that makes one wonder how their management survives.
2 Replies
1
Reply Sat 18 Jun, 2016 12:15 pm
@cicerone imposter,
It survives by making billions in profit which is it's goal.

People have such a myopic perception of the world that it's alarming.

If this incident materially impacts Disney's profits, heads will roll. If it doesn't (and it won't), they won't.

This is not to excuse Disney for their negligence here; nor it is to suggest they aren't guilty of gross negligence, but let's assume the latter is true.

What should happen? The ruination of Disney the corporation? The loss of thousands upon thousands of job and all the dreams of kids around the world? That's justice?

In order for significant punitive damages to be awarded, there will have to be evidence that Disney was fully aware of a material risk from alligator attacks and willfully chose to ignore it for profit motives.

The fact that there have been millions of visitors to this hotel and only two alligator attacks over, I believe, at least a decade, doesn't make the case that the risk was clearly obvious.

Having said this, they could have and should have put up "Beware of Alligator" signs and so they were negligent.

Millions of people are negligent each and every day of the week. We have an ancient Common Law system to which Insurance has been tacked on to deal with this fact in a fair and reasonable manner.

People make mistakes. If every mistake led to the ruination of the perpetrator, it would be a sorry world.
0 Replies
1
Reply Sat 18 Jun, 2016 12:56 pm
@Finn dAbuzz,
Rhetorical question Finn. We could actually look up stats on how cynical malmanagement results in "excess deaths" within "family Friendly businesses".
Theres probably more than youd be willing to accept.

I know, cynical malmanagement will be hard to pin on the heads of staff at Disney. BUT, Im sure Walt wouldnt like it, nor would he let his management staffers go unpunished internally . A good public firing of the management and marketing douche bags would be a good start(after an acceptable and painful settlement-like How bout a portion of each ticket sold for the next 15 yers of that dependents terminated life, nd each ticket embklazened with a Walt Disney "mea culpa". Also, Id like the firing of management and marketing to be severe enough to make these guys' careers TOXIC .
Remember, your staffers are there to provide you with rungs of deniability on the ladder of your businesses image.
1 Reply
1
Reply Sat 18 Jun, 2016 01:11 pm
@farmerman,
Go ahead.

I'll have no problem accepting the facts.

You and others insist on responding to my posts based on your presumptions about me rather than what I actually write.

1 Reply
2
Reply Sat 18 Jun, 2016 01:25 pm
@Finn dAbuzz,
Nyah yevyim???
Im merely asking that we make sure we have repeatably discoverable and verified FACTS whenever we publish our assertions.
PUhleeeze??

You often get yourself into kerfuffles (the likes of which I think you like to bring onto yourself). Its usually then that you start pub'ing stuff that you wish to be accepted as factual.
Im just saying that I must have been born in Missouri in another life.
1 Reply
0
Reply Sat 18 Jun, 2016 04:45 pm
@farmerman,
i don't disagree with you on facts.

Did you or did you not assert that I would have a problem with said facts?

All the rest of your post is self-serving BS trying to find fault with me.
1 Reply
5
Reply Sun 19 Jun, 2016 05:57 am
@Finn dAbuzz,
Your response reminds me of the guy who , asked by his doctor, replies
"I said that I cant get along with anybody you shithead"


and its another beautiful day in the country.