Possibly because this is a stupid answer. 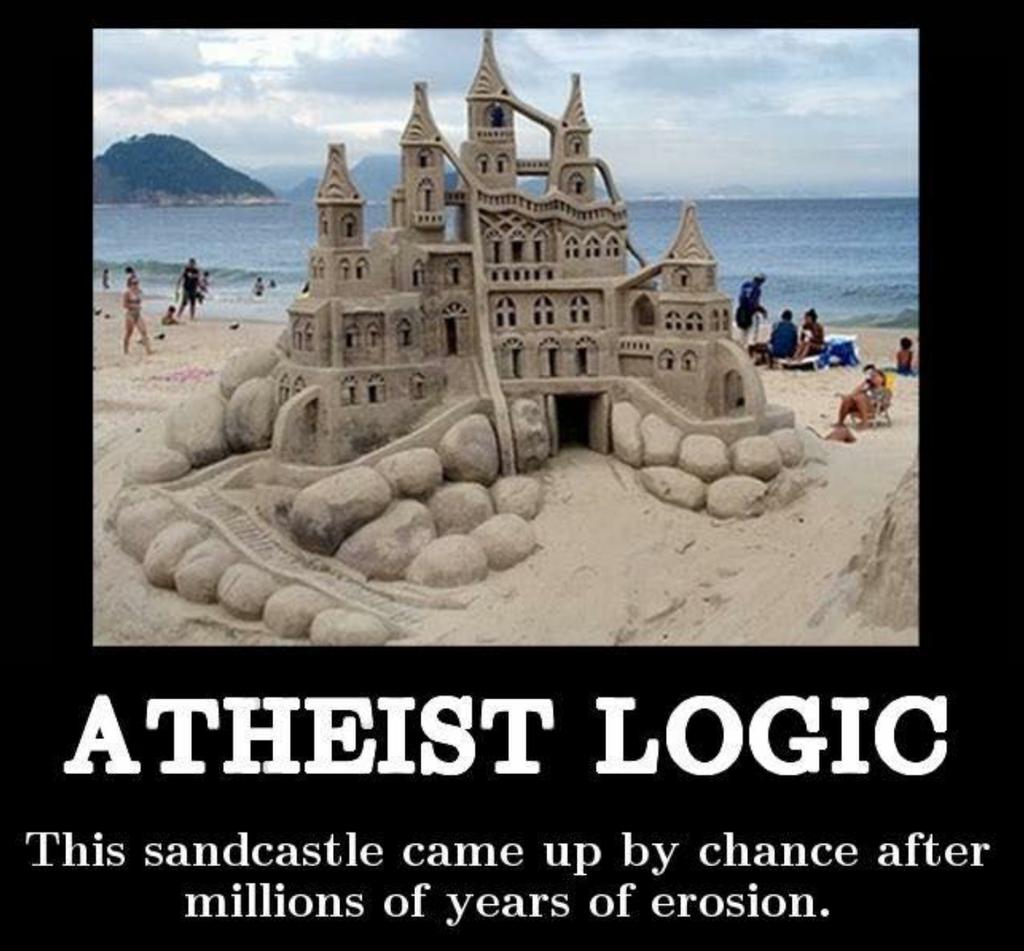 Lemme explain.
The miracle of birth, is in fact a miracle. Scientists has struggled for years to create life (let's clarify this, we have intention, cause, and creators (the scientists) and it still isn't enough, this in fact proves that there is design, and moreover design that is a great deal more intelligent than us, who barely understand how to keep it in our pants).
The universe itself. When we get into organic chemistry, well I switched majors because I didn't wanna take organic chemistry, but all of these chemical chain patterns are complicated even for something as simple as milk. A blade of grass? This would probably involve a few simple patterns, but you'll likely repeat this for pages upon pages if you were to record the entire organism. And there is an entire universe out there filled with planets, and maybe or maybe not ours is the only one with life. But for being the only one with life supposedly, what a showing! There are millions of plants and animals and fungi and bacteria.
The basic premise of atheism is so stupid that people writing the Bible without philosophical framework we have today still decided that it is a fool that declares there is no God. Suppose we were to happen upon a canoe. First off, even the most basic logic would tell us "This had some guy who carved it." And second, " It was probably made in a wood shop. " Creator, plus method of creation, plus location where this is created. Now, you could possibly have someone walk in on machines creating the thing, and conclude that nobody made this, but don't be fooled! Someone left the thing on auto-pilot. Someone built this automatic builder. Someone pushed the "Automatic" button, and someone will return if it starts to overheat.

I was trimming a fig tree yesterday (we got a few fruit trees in our yard) and it had two large trunks. Mom said I needed to choose one. But I didn't wanna choose. They were both doing well. But they would probably get in each other's way as they grew. But I suddenly was struck by the idea that you don't punish people who are doing well, just because you don't like them.
Yes, I know alot of people do. Alot of people are shits. Playing favorites isn't something cool or right. And I've been alot of places in my life, and switched my politics about four times (conservative, green, vaguely liberal with small town mindset, conservative after getting disillusioned with liberal policy, anarcho-conservative after deciding all politicians have failed). I've switched my official gender from male, to (maybe I'm gay?), to transgender female, to (definitely not doing THAT to my body) I'll be genderfluid. I can't say that some of the places I've been are wrong, just wrong for me. It's wrong to punish people for success though.
All the same, they were gonna grow together and choke each other out. So after my mom tried to make the decision for me, I cut both branches off. If God is actually fair, God must be cruel even to your friends and kind even to your enemies (at times). But while it seems awful that God would let us suffer, if he always favored us, or always our enemies, this would really be wrong. Favor everyone and let them both stagnate and die? Favor one and be unfair to another? Favor neither, and be cruel to both in hopes that both will be better next year? What should God do?
1 Reply
1
Thu 25 Feb, 2021 10:32 am
@bulmabriefs144,
Quote:

Favor everyone and let them both stagnate and die? Favor one and be unfair to another? Favor neither, and be cruel to both in hopes that both will be better next year? What should God do?

Best I remember, JC said they would best be left to grow up together. He’d be able to separate them afterward.

Life's a bitch, but you don’t get Seal Team 6 by sending kids to DisneyWorld.
2 Replies
-1
Thu 25 Feb, 2021 02:54 pm
@Leadfoot,
Jesus pruned trees. He allowed wheat and snares grow together.
1 Reply
1
Thu 25 Feb, 2021 08:00 pm
@NealNealNeal,
And ya still gotta put up with the weeds. Can’t wait for the harvest.
1 Reply
0
Thu 25 Feb, 2021 08:40 pm
@Leadfoot,
We gotta love the weeds and the wheat, as well as the rocks and the thorns. 😊
0 Replies
1
Thu 18 Mar, 2021 11:38 am
@edgarblythe,
People the law exist humans suffer because they want to they don't realize you can stop the suffering. Choice exist that's why human percieve sufferment. We were not meant to suffer but because of the tree of good and evil. G-d give us choice and we can do good or evil what falows in history is all the evil of man, since romans, greeks, medopersia, nazi regime, british empire, and babylon where it all come from.

We suffer because of what our ancestors did but the choice since then is to allow sufferment to exist in our life or change it and love like god loves and sufferment ceases to exist. Choice is what made sufferment it is not real but what we say and percieve and the truth with G-d not us.
1 Reply
-2
Sun 5 Sep, 2021 02:03 pm
@davidsheep88,
How can a God that is good allow human suffering?

I changed my settings to not bother me asmuch as possible.

Just laugh it off.

How can we be sure that all religions are wrong? - Discussion by reasoning logic
What if no religions are correct, but there still is a God? - Question by neologist
We are all like little children who often say: "Mom, Dad, leave me alone, I want to be on my own". - Question by Leaffan
Beyond tribalism; How well does your religious label serve you? - Discussion by MattDavis
Is religion responsible for the opposition to peace in the Israel-Palestine conflict? - Question by maxdancona
Concern for Religious Freedom or Preaching Political Messages? - Discussion by wandeljw
Why believe in god? The theist perspective. - Discussion by msolga
Why People Seek Solace In Gods. - Question by mark noble
Catholic remarried couples should abstain from sex - Question by Tes yeux noirs
Religion and Fear - Discussion by TomTomBinks
Copyright © 2022 MadLab, LLC :: Terms of Service :: Privacy Policy :: Page generated in 0.04 seconds on 08/07/2022 at 07:42:51
▲ ▼