London: Third Time is a Charm

It was blocked, then it flooded... now Diana's fountain is a safety risk


Kathryn Gustafson based the Diana memorial fountain on those qualities of the Princess, which were the most loved and cherished: inclusiveness and accessibility. But the £3.6m water feature in London's Hyde Park has hardly fulfilled the US landscape artist's aims ever since its official opening by the Queen on 6 July.

After initial "teething problems" including leaves blocking drains and blocked water pumps, the fountain will now remain closed to the public throughout this weekend as a safety investigation has been launched.

It follows injuries sustained by two adults and a child after they slipped on steps at the site on Thursday afternoon. The injured were taken to hospital but left the same evening.

With echoes of Lord Foster's wobbly Millennium Bridge and the ill-fated Dome, the accidents are just the latest in a series of mishaps to befall Diana's memorial.

First, fallen leaves blocked the fountain, causing the feature to flood and it later emerged the "cascades" would have to be turned off once a week for cleaning. A week later, a water pump was blocked, causing more flooding.

A meeting between the designer, engineers and independent health and safety experts was also called to investigate the accident and possible solutions to the problem.

The Royal Parks, which manages the memorial, said in a statement: "Various options were examined and a number are now being looked at in detail ... In the meantime the fountain will remain closed until all those involved are satisfied it is safe to reopen it to the public."

It is not the first time a water feature designed by Gustafson has attracted criticism - a "cascade" design linking two lakes in the Grade II-listed Crystal Palace Park has reportedly never worked. Pat Trembath, chairman of the local Sydenham Society, said the water feature had distinct flaws. She said: "We have a stone channel that joins a concert-bowl lake above and a fishing lake below. But the concert-bowl lake needs to overflow for the channel to fill with water, and this happens only when it is raining hard."

But Gustafson's British business partner, Neil Porter, said: "The upper lake was badly built and is not properly tanked."

Meanwhile, visitors to Gustafson's Diana memorial - which was originally perceived as a "moat without a castle" - are being left a little confused by the moat without water. One visitor, from Pimlico, central London, who came with her baby daughter, said: "It does seem fairly ridiculous, if its purpose was for children to play in it, that they didn't think of the really obvious thing like children slipping and leaves bunging up the drains." 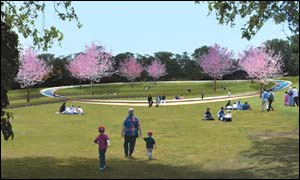 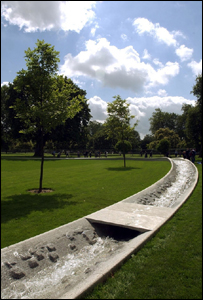