Forums: Green Thugs, Lia 2, Climate Change, Humor, Russian Propogandist
Email this Topic • Print this Page
1
Tue 22 Dec, 2015 09:51 pm
One amazingly stupid feature of AGW research is how they sample the bottom of an ice flow and declare it to be warmer now. Well, duh! They also conclude that because there is more CO2 now, then it must be caused by CO2! There is more water vapour now, and it is an GW pollutant many times greater than CO2.

PROVE A CAUSATIVE RELATIONSHIP!!!
1 Reply
0
Wed 23 Dec, 2015 03:18 am
@Ionus,
"ice flow" is not a generally used term. Do you mean "ice floe", which is usf? That's an ice sheet floating on water. That's not what they sample either; nor do they sample the bottom off whatever you had in mind.They drill ice core hunddreds of meters long from the ssurface to the bottom of the glacier, and they smple the entire thing. You can gt close to an annual layer of depositio, back 700,000 years or so. and , 6-7 ice. Ages and interglacials. small amounts of atmosphere are trapped in the ice, so they can tell how much CO2 was in the air at the time,and there are proxies like O18 that give you an idea of tthe temperaturre ar the time. Co2 never irose over those700K years above about 300 or 310 ppm. The 400 ppm we have today is unprecedented over those 700K,,,and CO2 is unquestionablly a greenhouse gas and warms things up. We put it there and it's warming. i
1 Reply
1
Wed 23 Dec, 2015 03:25 am
@rosborne979,
Read it again, ros, they're not sayng downward trend to the bottom, they're sying no downward trend. Intrrglacials are variable, depending on orbital dynamics, and they're sying this one will be really long.,
1 Reply
1
Wed 23 Dec, 2015 05:00 am
@MontereyJack,
I'm talking about what the ice cores show as a regular pattern. What are you referring to?
0 Replies
1
Wed 23 Dec, 2015 05:26 am
Sedimentation samples show the planet to have been ice-free (in terms of what we call an "ice age") for all but a few periods of millions of years out of four and a half billion years. The thing which many people point out is that we produce CO2 at rates which beggar all other ages of humanity's production of CO2. Babbling about how much CO2 we produce as a function of atmospheric profile over millions of years is either gross stupidity or willful deceit. What matters is how fast we dump CO2 into the atmosphere right now. An additional factor which the energy sector troglodytes ignore is the unprecedented rate at which we are deforesting the planet.

I suppose the philosophical way to view it would be to point out that i will not be around to suffer the consequences, and to just sit back and enjoy the show as the denialists provide us so much free, unintended entertainment with their contortions as they attempt to explain away the data.
1 Reply
1
Wed 23 Dec, 2015 06:11 am
@MontereyJack,
I'll try again. At the bottom of ice sheets and old glaciers they have found it was colder when the ice was laid down. Well isn't that bloody obvious? They have also found CO2 levels were lower then. Why have you assumed CO2 is causing it to be warmer? Water vapour is far less when snow is being compacted to ice, and once it is an ice field like Antarctica there is very little water vapour. Prove that it wasn't water vapour increases that made it warmer as it is a far greater greenhouse pollutant them CO2. Does that help you understand?
1 Reply
1
Wed 23 Dec, 2015 06:19 am
From Gunga's ref a few posts back:
“Our economic model is at war with the Earth,” writes Klein. “We cannot change the laws of nature. But we can change our economy. Climate change is our best chance to demand and build a better world....lowering emissions is just one example of how the climate emergency could – by virtue of its urgency and that the fact that it impacts virtually everyone on earth – breathe new life into a political goal… (such as) raising taxes on the rich, blocking harmful trade deals, to reinvesting in the public sphere….Even more importantly, the climate moment offers an overarching narrative in which everything from the fight for good jobs to justice for immigrants, reparations for the injustice of slavery… all becomes a grand project of building a non-toxic shock-proof economy before it is too late”.

What matters is how fast we dump CO2 into the atmosphere right now.

Wrong. What matters is the planets ability to regulate itself and absorb ALL greenhouse gases not just the CO2 that is being made naturally and the small percentages that are made by man. Why do you always ignore the amount of CO2 produced naturally?
1 Reply
1
Wed 23 Dec, 2015 09:04 pm
@Ionus,
We ignore it because what is produced naturlly and what is sequestered keep in-atmospher CO2 in euilibrium at about 280 ppm during interglacials. When we burn carbon sequester over millions of years as fossil fuels we overehelm the natural sequestering, which can only handle. A portionA of what w'r dumping, which iss why CO 2 ha now reached 400 ppm, unprcedented in the natural record for the last 700,000 you're.
1 Reply
1
Wed 23 Dec, 2015 09:12 pm
@Ionus,
That's really a tootally unwarranted conclusion, ionus. There are literally. thousasnds of ideas bout what should be done about global warming. That is only ONE of them. It ha nothing to do ith the science bot only to do w;ith the social and political actions weshould take as a result of the science
1 Reply
1
Wed 23 Dec, 2015 09:41 pm
@MontereyJack,
Do you even look at a ref if the other side give it or are you worried about tainting your pure beliefs?
1 Reply
1
Wed 23 Dec, 2015 09:43 pm
@MontereyJack,
No, as usual you have missed the point. You need to stay current with the thread if you are to post in it. Just joining and making that sort of mistake is Ok, but not when you live in it. She is the adviser to the Pope.
2 Replies
1
Wed 23 Dec, 2015 11:52 pm
@Ionus,
Ionus wrote:

She is the adviser to the Pope.


How do you know this? As far as I could find out, she was among many others invited by Cardinal Peter Turkson (president of the Pontifical Council for Justice and Peace) to join the Vatican climate conference last summer. (She endorsed 'Laudato Si'.)

That conference had been organised by the Pontifical Justice and Peace Council, together with CIDSE, an international alliance of Catholic development agencies. 200 political, religious and civil society leaders were at that two days conference.

Do you call all the others "adviser to the Pope" as well, Ionus? How do you call those, who advice the Pope before 'Laudato Si' was published, like Edenhofer and Klein (General Secretary of the CIDSE ?

0 Replies
1
Thu 24 Dec, 2015 12:01 am
@Ionus,
You've missed the point, not me. She is the advisr to the Popr. She is tkong boutwhat se thinks the chuch hould be oing givrn a world where climatr chnge is going on. That s NoT about the. Science involved, that is about socety nd politics and theology and the church's position in that wor
ld. Give ylour conspiracy theories that everybody who relizes AGW is ral is dsaying it for ulterior motives.
0 Replies
1
Thu 24 Dec, 2015 12:13 am
@Ionus,
in fact i. have read quite a bit of the denialist sid, and it is pretty lame, rehashing the same wrong points. Have you ever readbny of the voluminos evidrnce FOR climate change, likebny of the IPCC'sassessment reports? You get thr scincr so wrong it's hard to beleve you hhave actually rad nything but other denialists. ?
0 Replies
2
Thu 24 Dec, 2015 12:30 am 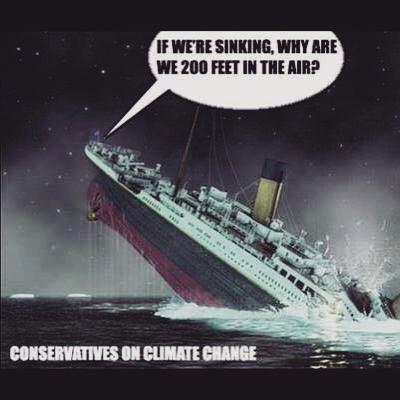 0 Replies
0
Thu 24 Dec, 2015 12:55 am
@Ionus,
You're totally garbled. Ice ages occur becsuse ecbplantsecentricities in eart's orbit make insolation less, so the earth gets colder. As ice coversmore of the planet, fewer plants grow, so less CO2 is produced, about 180 ppm during iv ages. When we hit sn interglacial, more plants grow, and ZCO2 goes up nd hlds steady at aound 280 ppm. CO2 is a feedback, itmake the earth warmer because insolation makes the rth warmer agin nd more plant life mkes more CO2 as a consequence. But today we are introducing carbon sequestered in the gar past back into the air, nd that makes it a forcer, driving the temp up, rathet thn a feedback, changing as the result o somethingelse changing.
1 Reply
1
Thu 24 Dec, 2015 06:46 pm
@MontereyJack,
Can you compose that so we can understand what you're trying to tell us?
"Carbon sequestered in the gar" has no meaning to many.
2 Replies
1
Thu 24 Dec, 2015 07:05 pm
@cicerone imposter,
He was doing that yesterday, too. It's a little worrisome from someone who usually writes so clearly.
0 Replies
1
Thu 24 Dec, 2015 07:38 pm
@cicerone imposter,
it was "far past", large fingers, stubborn tblet keyboard that drops characters, and nearl ipossible to edit--and ityped "nearly impossible" and that's wht came out.
1 Reply