Forums: Germany, Berlin Wall, Europe, History, Anniversary
Email this Topic • Print this Page
Reply Sat 8 Nov, 2014 12:26 pm
November 9th, 1989 was a very emotional day for all Germans, east and west, even for us living abroad. One couldn't help but have tears in their eyes and goosebumps on their forearms. Not to forget our terrible history of Nazi Germany, November 9th, 1989 was a day of joy and unification.

Today , marks the 25th anniversary when the Berlin Wall fell. For this celebration, Berlin has built a wall of illuminated balloons along the borders of the former wall. Tonight these illuminated balloons will be released into the sky. Here are some pictures of Berlin and the balloons. 0 Replies
1
Reply Sat 8 Nov, 2014 12:44 pm
@CalamityJane,
I wrote today instead of tomorrow...couldn't edit anymore
0 Replies
2
Reply Sat 8 Nov, 2014 02:17 pm
@CalamityJane,
Definitely a good and forwarding day in history. Thanks to you for bringing back to mind this remarkable and uplifting day.
0 Replies
2
Reply Sat 8 Nov, 2014 02:51 pm
I took my mom (BBB) on a bus tour of five European countries in 1987, one of them being West Germany. Of the five, it was my favorite among England, Holland, France and Switzerland. I felt I was among "my people" with my favorite types of cuisine, personality and scenic environment. Don't know why, we mostly have Celtic bloodlines on both sides of the family.

We didn't get to see the Wall back then. I would like to return someday to see the other side and see how much has changed and been preserved during the unification.

1 Reply
1
Reply Sat 8 Nov, 2014 02:51 pm
0 Replies
1
Reply Sat 8 Nov, 2014 03:30 pm
@Butrflynet,
Much has changed, especially in East Berlin. The first time I went to Berlin, we were able to stay at a hotel in East Berlin, but that was when they were having major reconstruction of 99% of the buildings. The tv tower was already there, and was visible from my hotel room window. I've since then visited many times, and it's been totally rebuilt, and even went up that tv tower at Alexanderplatz. What is most amazing about East Berlin is how they've been able to build modern structures within all the old ones, and the museum district is one place you shouldn't miss. The US Embassy is right next to Brandenburg Gate, and I've walked the whole of Unter den Linden all the way to the river. Many good restaurants, and don't miss visiting the train stations.

This picture was taken on my third visit to Berlin from the tv tower in 2005. 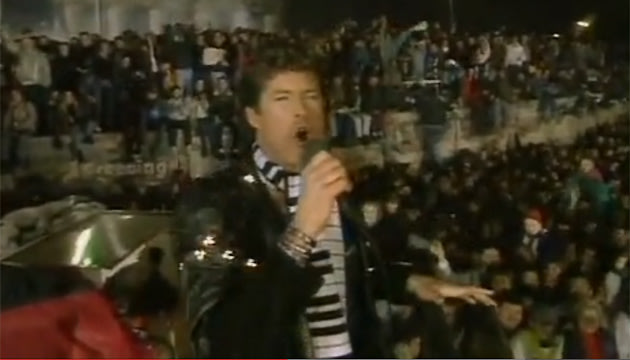 In 1965, I stayed with my school class in a hostel next to the ruins of the Anhalt station (Anhalter Bahnhof/Askanischer Platz). From some windows of that building (originally Siemens headquarters for engineers, than headquarters of the VARTA battery company, bombed during the war, afterwards at first refugee "hostel", later accomadation for schools and groups - today newly built offices for the daily paper Tagesspiegel) we could overlook the Potsdam place.
During the one week we stayed there, we've seen/noticed two failed attempts to "cross" the border. You hardly could sleep any night (if your room was an the "wrong" side of the building) due to the flood and searchlights.

When we walked to the U-Bahn ("Metro") station, we had to walk along the wall. Nearly every time, our group was accompanied, by a West-Berlin policeman and an armed custom officer. Below a map of the subway system in Berlin at that time.
The yellow arrows (left, nearly at the corner) mark the hostel and the station. (Some info about the station is linked in the post above)
0 Replies
1
Reply Sat 8 Nov, 2014 04:37 pm
@CalamityJane,
From what I've seen of him, he seems to be a genuinely nice bloke.
1 Reply
1
Reply Sat 8 Nov, 2014 05:52 pm
@izzythepush,
I don't know, Izzy, he has had many alcohol problems in the past. Hopefully, he's bypassed that by now.
0 Replies
1
Reply Sat 8 Nov, 2014 06:01 pm
@Walter Hinteler,
I was driving to Berlin in the early 80s and had to drive through the entire DDR (East Germany) at that time - it was downright frightening to see so much police with firearms and German shepherds around. While driving,
us "Westerners" were only allowed to stop at certain rest areas and we were not allowed to speak to anyone.

While in Berlin we were almost afraid to get near the wall, it seemed so
surreal to us. Of course I was quite young then and found Berlin utterly depressing. Not a place I would have liked to live.

Three years ago, we visited again - what a change!! Berlin is very green and has within the city many parks and the eastern parts of Berlin were and are still renovated to match the rest of Berlin.

Like the song from Marlene Dietrich "I still have a suitcase in Berlin" (translated) it's always nice to visit Berlin.

While in Berlin we were almost afraid to get near the wall, it seemed sosurreal to us. Of course I was quite young then and found Berlin utterly depressing. Not a place I would have liked to live.

Three years ago, we visited again - what a change!! Berlin is very green and has within the city many parks and the eastern parts of Berlin were and are still renovated to match the rest of Berlin.


I've been a three times in Berlin before the fall of the wall and one time shortly afterwards, in both parts.
And since the re-unification a couple of times.

In a report in The Independent the background for the chance is mentioned, correctly in my opinion:

When Germany reunified it was agreed the East German mark should be convertible one-for-one with the West German mark. The Bundesbank opposed this, arguing that a more appropriate rate would be two-for-one, recognising the much lower productivity of the East. Politics prevailed. The resulting surge in unemployment from a non-competitive exchange rate had to be offset by massive subsidies from the West. Add in the investment needed to bring crumbling infrastructure to West German standards and the annual transfer at some points reached about 8 per cent of GDP.

Thanks to the generosity of West German taxpayers, the gap has been narrowed. Infrastructure in the East is now pristine, yet it remains poorer and westward migration continues. In Berlin the gap is less obvious, as it was before the Wall fell. That is partly because the grander bits of the city happened to be in the East, partly because cheap rents in the East have supported a vibrant artistic community – hence the Berlin tag "poor but sexy". Elsewhere the fissures are still evident. It seems to take more than a generation to reverse communism's economic damage, even with an almost unimaginable transfer of wealth.

1 Reply
1
Reply Sun 9 Nov, 2014 12:42 am
@Walter Hinteler,
From November 10 onwards, all GDR-citizens could travel freely. Which they did: some visiting relatives and friends in the West, other just driving westward for a day. The traffic jam on our local motorway was un-describable ... I've been in it. 1 Reply
2
Reply Sun 9 Nov, 2014 12:46 am
@Walter Hinteler,
Yeah, but the faces we can see are smiling.
1 Reply
2
Reply Sun 9 Nov, 2014 01:39 am
I have been to Berlin before and after and I like the city.
Coming down years ago by train from Copenhagen was a horror trip. We were not allowed to look out of the windows and curtians were pulled and military walked back and forth with maschineguns. That changed later. I took the sleeper a couple of times and there eerything was searched. All passengers stood int their pyjamases freezing in thecorridors while the East Germans went through every part of the cabin.

25 years ago I stayed in a nice hotel in Amsterdam. In the evening I took off the heavy bedspread and out fell a pair of men´s socks. Turned on the TV and saw the beginning of the Wall open up.

Some time later I was back in Amsterdam, same hotel, same heavy bedspreads and again a pair of socks and this time UDDSR fell apart.

I haven´t been back since that.

From November 10 onwards, all GDR-citizens could travel freely. Which they did: some visiting relatives and friends in the West, other just driving westward for a day.

Yeah, but the faces we can see are smiling.


Already in September, the first people from the GDR arrived here via Hungary. From the 10th of November, many more migrated to the Federal Republic.

The "normal" reception camps couldn't handle the tenthousands who arrived. So, in a village of my native town (castle with [formerly] boarding school annex) was set up: up to 1,700 stayed there for a couple of days up to some weeks. (12,000 altogether until mid-1990.)
I've worked there and with them as a social worker temporarily.
1 Reply
2
Reply Sun 9 Nov, 2014 07:45 am
@Walter Hinteler,
Some graphics, via reuters