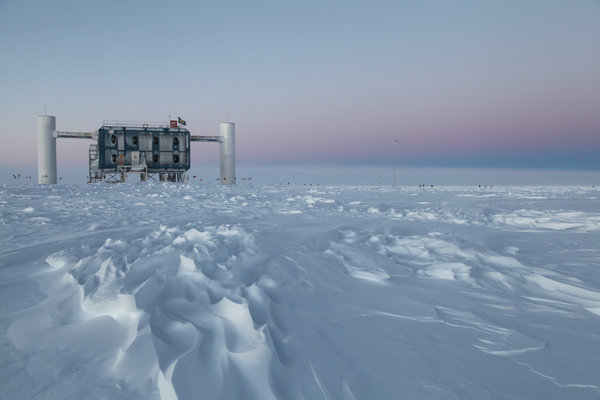 At the bottom of the world, an observatory embedded in ice and designed to catch bountiful but elusive subatomic particles could give astronomers a brand-new look at the universe.


Jim Haugen, IceCube/N.S.F.
A digital neutrino detector being lowered into a borehole drilled in the Antarctic ice. There are more than 5,000 sensors like this one in the IceCube Neutrino Observatory's array.
An international team of scientists reported on Thursday that over a two-year period they had detected 28 of these particles, known as neutrinos, that arrived from outside the solar system and possibly from across the universe.

“This gives us a new way to do astronomy,” said Francis Halzen, a physics professor at the University of Wisconsin who is the principal investigator for the project, the IceCube Neutrino Observatory. The findings appear in the journal Science.

In 1987, detectors in the United States, Japan and Russia noted two dozen neutrinos that originated from a supernova explosion of a star about 165,000 light-years away. That was the first and last time distant neutrinos had been detected until the IceCube observatory, largely financed by the National Science Foundation, started its observations in 2010.

More than 5,000 sensors have been lowered and frozen into a cubic kilometer (about one-quarter cubic mile) of Antarctic ice, looking for flashes of blue light that are given off by the cascades of debris generated by a neutrino.

Neutrinos are ghostlike particles that interact only very rarely with the rest of the universe. The fusion reactions that power the sun give off a flood of neutrinos, but almost all of them go undetected and unfelt: Every second, trillions of them pass through every person on earth.

IceCube, built over a decade at a cost of $271 million, ignores the solar neutrinos, but is instead searching for those coming from cataclysmic events elsewhere in the galaxy or even farther away. Until they looked, scientists did not know what they would find.

“I actually think the most surprising thing is that they show up when they were expected,” Dr. Halzen said.

The scientists named the newly discovered neutrinos after “Sesame Street” characters. The two most energetic of the 28 are Bert and Ernie; two others are called Miss Piggy and Snuffleupagus.

In the third year of data, not reported in the Science paper, an even more energetic neutrino appeared. That one is called Big Bird.

Dr. Halzen said some of the 28 might have come from our own Milky Way galaxy, but others originated farther away. “Some of them are certainly extragalactic,” he said. IceCube detects only one out of a million neutrinos, which means about 28 million neutrinos from outside the solar system passed through during that time.

Because neutrinos so rarely collide with anything, detecting them requires a great deal of material — in the case of IceCube, the vast expanse of ice readily available at the South Pole.

One in a great while, a neutrino does collide with something, setting off a cascade of electrons and other subatomic debris. Charged particles in a transparent material like ice give off blue light. Phototubes record the bursts of light, and from the patterns, scientists can determine the direction and energy of the incoming neutrinos.

Although IceCube is not tuned to find the low-energy neutrinos from supernovas in the galactic neighborhood, another explosion like the one observed in 1987 would be a bonanza for IceCube. It would register about 100,000 neutrinos, Dr. Halzen said.

Until now, most telescopes have looked at the universe by gathering photons, or particles of light, including lower-energy radio waves, visible light, X-rays and gamma rays.

The very-high-energy neutrinos detected by IceCube open a new spectrum for observing the universe.

With more observations, the scientists hope to be able to determine where the neutrinos originated, whether from black holes or the rapidly rotating burned-out stars known as pulsars.

John G. Learned, a professor of physics at the University of Hawaii who is not part of the IceCube team, said its conclusion that the 28 neutrinos came from beyond the solar system was convincing.

But what was surprising is that IceCube did not detect neutrinos of even higher energies than Bert, Ernie and Big Bird, which was expected given current ideas of the cosmic processes thought to generate them. “They’re not there,” Dr. Learned said. “We don’t understand that.”

But he added: “That’s the kind of situation we love. A mystery may mean we may learn some fundamentally new science.”

There is also a tantalizing hint that some of the neutrinos are coming from the center of our own galaxy. That too would be surprising, because anything there creating neutrinos should also be creating very-high-energy cosmic rays and gamma rays, which are not seen.

Why, stop the invasion of aliens.

Wonder how they know where they came from.

I thought the Nazi/Alien alliance were there already.
In their hollow Earth secret base, just waiting for the right time to strike.

1 Reply
1
Reply Sat 23 Nov, 2013 06:33 am
@eurocelticyankee,
NOW FOR SOMPETHING COMPLETELY DIFFERENT.
A GAMMA BLAST MISSED EARTH-Last spring, a large gamma ray blast from an exploding supernova bathed us in the remnants of the ray. Its point of origin was about 3.5 BILLION light years away and, had we been in the focus of the cohesive beam of gamma ray energy, our atmosphere would have been stripped off and we would have been left a burnt hunk of space rock.

This was the largest such event ever recorded and to think it was the result of a supernova that collapsed several BILLION years ago.

If there is no means to detect, do neutrinos exist?

They were first proposed to exist in 1930 by Wolfgang Pauli, they were first detected in 1956 by F. B. Harrison, H. W. Kruse, and A. D. McGuire who shared the 1995 Nobel prize for that. They come from radioactive decay e.g. the Sun, atomic reactors, atomic bombs, certain rocks in the Earth's crust, when cosmic rays hit atoms, etc. There are so many flying about that in order to filter out the local ones and detect the ones coming from outside the solar system they had to bury the detectors in the Antarctic ice.

Ive always been interested in learning how the forst detectors could distinguish an antineutrino (C14 beta decay) from a neutrino. (Mg23 decay)


I don't think they could. You've come a long way in a short time, Farmerman - one minute you think they are undetectable, the next you're throwing around antineutrinos and different kinds of beta decay. What are you playing at?

JEEEZ, gimme some room once an awhile
1 Reply