Environment Minister Greg Hunt released a statement this morning, praising the career of the late Lou Reed, who died at his New York home yesterday.

“He scored 1.7 million points, achieved 67,000 rebounds, at an average of 0.45 during his career at Manchester City. He was an inspiration,” Mr Hunt said.

“What’s perhaps most remarkable is that he played on well into his 80’s. On behalf of all Australians, I extend my sympathies to his family and the community of Citation Needed”.

Campaign against carbon tax. Have hottest winter on record and earliest bushfire season.
Solution: Get rid of Climate Change Council

The government scraps plans to create an animal welfare watchdog, a day after more shocking footage emerged of livestock being mistreated in the Middle East.
http://www.abc.net.au/lateline/content/2013/s3881661.htm

I have for a long time been incredulous at Rupert Murdoch's repeated denial of claims that he exercises far too much editorial control over his newspapers.

After reading his speech to the Lowy Institute in which he praised the virtues of Australian multiculturalism, I now wish he would exercise more editorial control. For it is nowhere but in Mr Murdoch's newspapers that multiculturalism is more heavily misrepresented and its virtues traduced.

For nearly two decades, multiculturalism has been a totemic issue for conservatives in their prosecution of the culture wars. Multiculturalism has routinely been used by News' columnists and opinion writers as a stick with which they caricature and beat up on what they perceive to be to the left; along with asylum seekers, same-sex marriage, the republic and so on.

Australia's self-professed “most widely read columnist”, Andrew Bolt, even goes so far as to conflate multiculturalism and immigration with crime and overcrowding in Sydney. In an article in The Daily Telegraph in May 2012, Bolt made a completely spurious connection between multiculturalism and immigration on the one hand and drive-by shootings and crime on railway stations on the other. After asserting that “some newspapers hide this distressing connection”, Bolt sarcastically suggested that we should, “thank them for that because we don't want more people wondering whether immigration no longer means just more lovely pad thai and kebabs, but also lumps of the unassimilated and resentful at late-night train stations”.

Advertisement
Having quite rightly said in his speech that having nearly a quarter of our population born overseas “means Australia is on its way to becoming what may be the world's most diverse nation. This is an incredible competitive advantage”, I hope Mr Murdoch has a quiet chat with Andrew Bolt and lets him know that poisoning the well against immigration and multiculturalism is not in Australia's long-term national interest.

Having found myself in agreement with Mr Murdoch on the subject of immigration and multiculturalism, I find myself having great difficulty reconciling the inconsistency of his claim to be both libertarian and egalitarian at the same time.

While there are differing strands of libertarianism, Mr Murdoch is likely neither an anarchist nor a libertarian socialist of the free-love variety. I assume he considers himself a libertarian in the tradition of those who favour individualism over collectivism, laissez-faire capitalism, a minimalist state and all its spin-off theories about trickle-down economics and how the poor are poor because it's all their own fault.

If so, how he reconciles this with an egalitarianism which must by definition insist that all people be treated equally, or an egalitarianism that insists on equal access to such things as health and education mandated by state support is beyond me. Australia's most recent and possibly only flirtation with libertarianism was the Howard government's Work Choices legislation, in which one of the hallmarks of egalitarianism, collective decision-making, was virtually outlawed. Voters saw the contradiction between their egalitarian instincts and the libertarian outcomes of those laws and quite rightly punished the government at the 2007 election.

Try as they might to claim otherwise, libertarian wolves who attempt to clothe themselves as egalitarian sheep won't pass muster with the Australian public. Even as the migrant I am, there's a few things I know about Australians': they know a fair go when they see it and they know when mutton's been dressed up as lamb.

Doug Cameron is a NSW senator and trade unionist.

0 Replies
0
Reply Mon 23 Dec, 2013 05:12 pm
This is kind of interesting - firstly because yet again the USA lags behind the rest of the world on a 'social justice/welfare' theme: 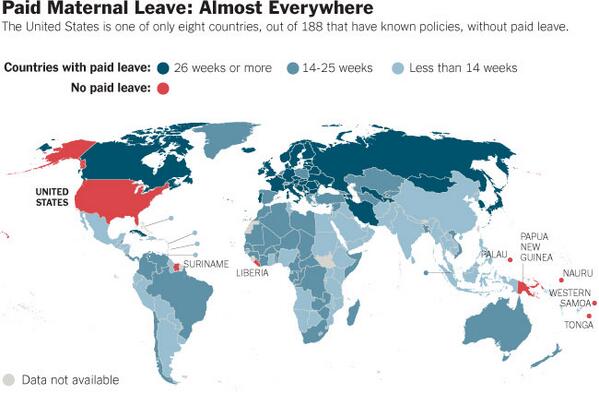 But also because of the juxtaposition of Abbott's pushing of his paid parental scheme, given his oft repeated - 'no price on carbon because the USA isn't doing it'.

0 Replies
0
Reply Thu 23 Jan, 2014 08:08 pm
Sorry I haven't been keeping this up to date. If you're from overseas just assume the current government is f*cking up royally. Indonesians sending navy ships to our marine borders. Environment minister tearing up world heritage agreements etc.

This one is just bizarre - especially when contrasted with the $9 million indigenous legal aid program they killed. A $20million marriage/relationship counselling voucher system!

Australian couples will be allowed to apply for $200 "relationship vouchers" from July 1, with the Abbott government confirming the start date of the 12-month trial.

The idea is the brainchild of Social Services Minister Kevin Andrews, who wants to "help couples achieve a greater degree of happiness and stability and thereby a better environment for their children".

Despite Tony Abbott's staunch opposition to same-sex marriage, and refusal to allow a conscience vote on the issue, gay couples will be allowed to apply for the vouchers.

Under the trial scheme, the government will offer 100,000 couples a $200 subsidy for "marriage and relationship education and counselling, including components of parenting education, conflict resolution and financial management education".

Mr Andrews has designed the vouchers for couples "who are married, intending to marry or who are in a committed relationship, including same-sex couples".

"The evidence shows that strong relationships between parents make a substantial difference to a child," Mr Andrews' spokeswoman said.
The $20 million trial will run nationally for 12 months, and the government will then evaluate the results to see whether a longer term scheme should be implemented.

Miserable fockers can't even toe their own conservative 'keep the govt small and out our lives' line consistently.
2 Replies
1
Reply Fri 24 Jan, 2014 03:33 am
@hingehead,
We were talking about that at work today.