Forums: Cults, Celebrities, Popular Culture, Fans
Email this Topic • Print this Page
Reply Mon 5 Aug, 2013 10:44 pm
A question I have been asking myself lately, with all if these idols and popular music stars, aren't their fan bases basically cults? I mean, fans is an abbreviation of fanatic after all. Also, this leads into other questions, such as, are these idols healthy for their fans? I have heard in school, personally, that many of my classmates want to, "marry" One Direction, Jurtin Bieber, etc. Isn't this damaging society? Although this might be a bit eccentric, there was a comic, or a kind of online poster I saw that asked, "What if Juston Bieber demanded blood from his fans?" It was supposed to be humourous, but it relates to my question. What are your opinions or your answers to my questions?
Type: Question • Score: 0 • Views: 2,758 • Replies: 8
No top replies
View best answer, chosen by Logicus

2
Reply Tue 6 Aug, 2013 12:59 am
@Logicus,
You're right in your assessment, but there is absolutely nothing new about any of that. Immature people apparently need a living idol to worship. It was probably as true in Shakespeare's day as it is today. Some fans (especially female) seem to develop what amounts to a psychosis and can go into a kind of semi-erotic quasi-religious ecstasy at the sight or even just sound of their favorite idol. 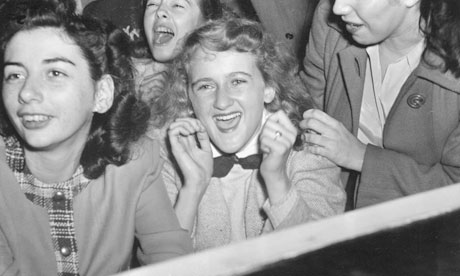 The girl in the center of the photograph is wearing a bow tie, because Frank always wore a bow tie in those days.
0 Replies
1
Reply Tue 6 Aug, 2013 03:20 am
From a Mike Wallace interview of Rudy Vallée in 1958:

WALLACE: ... He -- he -- he wrote this: he said, "The pandemonium that ensued in those other years whenever Vallee made a public appearance or even walked the city streets, the women who vowed they would kill themselves for his favor, the housewives who neglected their homes to invade the theaters where he crooned" ...How can you fly in the face of the man who was there?

VALLEE: Mostly poppycock, Sobel isn't accurate at all because it wasn't. I saw the people in the audience at the Eighty-first Street Theater the first day that we made our debut and I saw them, I saw them stand and cheer and there were as many men as there were women, ...there were young boys and young girls and adults. I would say that it is the thinking of all of them and not the female hysteria that has been the columnistic delight, of course they've got to write something of that nature and they've always exaggerated it.

WALLACE: Well, actually, Louie Sobel was -- has been very complimentary to you. He goes on ...

VALLEE: Oh no, I don't say that he's uncomplimentary, he's just not accurate. He doesn't know because he may have maybe seen one performance where there were preponderance of women and felt that was the average but it wasn't.

WALLACE: In other words, you felt at that time, you feel that you were in a sense the ideal of youth, male and female.

VALLEE: I think my appeal is very much as Sinatra's and Sinatra's appeal is to all types of persons and I ...

Plus ça change . . .
0 Replies
1
Reply Tue 6 Aug, 2013 07:12 am
Some fans won't leave their idols be even ater death. Rudolph Valentino was an immensly popular (though quite mediocre) silent movie idol in the 1920s. He died in Aug., 1926 at the age of 31 from peritonitis, contracted after an apendectomy.

Here's what Wkipedia says about his funeral
(emphasis mine):

An estimated 100,000 people lined the streets of New York City to pay their respects at his funeral... handled by the Frank Campbell Funeral Home. The event was a drama itself: Suicides of despondent fans were reported. Windows were smashed as fans tried to get in and an all-day riot erupted on August 24. Over 100 mounted officers and NYPD's Police Reserve were deployed to restore order. A phalanx of officers would line the streets for the remainder of the viewing. The drama inside would not be outdone. Polish actress Pola Negri, claiming to be Valentino's fiancée, collapsed in hysterics while standing over the coffin,.. and Campbell's hired four actors to impersonate a Fascist Blackshirt honor guard, which claimed to have been sent by Benito Mussolini. It was later revealed as a planned publicity stunt. Media reports that the body on display in the main salon was not Valentino but a decoy were continually denied by Campbell.


Valentino's crypt
Valentino's funeral Mass in New York was held at Saint Malachy's Roman Catholic Church, often called "The Actor's Chapel", as it is located on West 49th Street in the Broadway theater district, and has a long association with show business figures.
After the body was taken by train across the country, a second funeral was held on the West Coast, at the Catholic Church of the Good Shepherd in Beverly Hills. Valentino had no final burial arrangements and his friend June Mathis offered her crypt for him in what she thought would be a temporary solution. However, she died the following year and Valentino was placed in the adjoining crypt. The two are still interred side by side in adjoining crypts at the Hollywood Memorial Park Cemetery (now the Hollywood Forever Cemetery) in Hollywood, California.

1 Reply
1
Reply Tue 6 Aug, 2013 11:50 am
@Lustig Andrei,
Isn't that a danger to society though? I mean, people who are willing to kill themselves to an individual who died seems pretty dangerous. It seems like a cult for some reason.
1 Reply
1
Reply Tue 6 Aug, 2013 04:54 pm
@Logicus,
What do you suggest should be done about it then? Pass laws outlawing hero worship and the formation of fan clubs? Sounds a little extreme to me. Everyone has the right to go to hell in the handbasket of their own choosing.
1 Reply
1
Reply Wed 7 Aug, 2013 11:46 am
@Lustig Andrei,
I never meant to go to that extreme. I just needed a little clarification on this...topic.
0 Replies