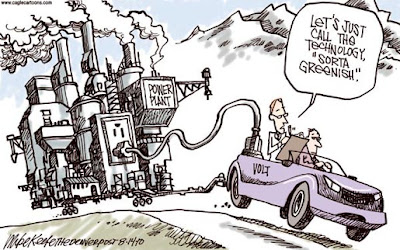 .... For every mile driven, the average electric car indirectly emits about 6 oz of CO2. While this is better than a similar-size conventional car (12 oz/mile), keep in mind that just the production of the electric car has already resulted in 15 TONS of carbon emissions —the equivalent of
80,000 miles of travel in the vehicle (!)

Thus, if a typical electric car is driven 50,000 miles over its lifetime, the substantial initial emissions from its manufacture means the car will actually have put more carbon-dioxide in the atmosphere than a similar-size gasoline-powered car driven the same number of miles. .... 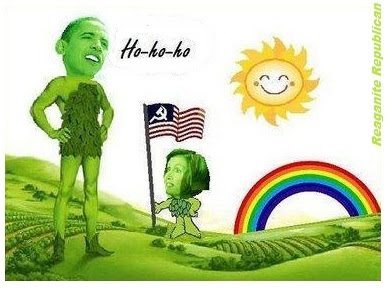 Every car made appeals to some version of vanity

1 Reply
0
Reply Wed 20 Mar, 2013 11:12 am
@farmerman,
For whatever reason, we don't see Bork Obunga and our feral government claiming that they're saving Gaea by expending 90K in taxpayer dollars for every Camaro or Esplanade produced. That's the main difference.
1 Reply
2
Reply Wed 20 Mar, 2013 11:32 am
@gungasnake,
your problem is that you appear too impressed with your glibness and not fact.

As we all recall, as paret pof theRecovery cash, the Feds invested a total of about 2.5 Billion in all sorts of automotive energy projects including new battery techn ology.. Some of these investments have eresulted in lotsa new lithium technology and fast rechrage batteries and plug in hybrids.

NOONs technology can ever compare with the gas spewing and particulate, NOX and sulfur spewing of the internal combustion engine.

Too bad you wont live long enough to see all this reach fruition. Thats the problem with conservative, youre too busy conserving that you cant see the road ahead.


Well, maybe youd be happier with the Escalade and Esplanade HYBRIDS?? They reach a wopping 15 mpg as the trade off to keep those stupid airport limos on the hiways.


Gaia is the idea of one person and its never really caught on as a scientific hypothesis.You, however, are a fan of anything that has no evidence behind it eh?
1 Reply
0
Reply Wed 20 Mar, 2013 07:53 pm
@farmerman,
My two present vehicles are a Plymouth caravan which mainly sits idle until I need to haul something with it and a Honda accord with a 2.2 liter engine which gets around 33 mpg on the highway at highway speeds. If I had to buy a new car right now it would probably be the little Nissan Versa hatchback which, with a 6 speed manual transmission, would probably get over 40 mpg on the highway and 25 - 30 around town. The other possibility would be a a Jetta diesel if I could get past feeling stupid about paying more for diesel than people pay for regular gas.

1 Reply
2
Reply Thu 21 Mar, 2013 01:32 am
@gungasnake,
You can make your own diesel very easily so then you wouldnt feel anymore stupid than you are used to.

1 Reply
1
Reply Thu 21 Mar, 2013 02:15 am
@farmerman,
Ive gotta say though, its hard to discount the concept of how ocean salinity is maintained at about 3.5 % and never seems to get driven up into a toxic level at 4.5% and above. Lovelocks concept of a feedback system has never been scientifically refuted.

Can you refute the concept of Lovelock thats based upon salinity adsorption and desorption in deep ocean currents interacting with sub oceanic basalts at oceanic ridges and hot spots?