Forums: Etymology, Food, Spices, Borrowing
Email this Topic • Print this Page
Reply Wed 12 Sep, 2012 08:48 am
I'm curious about the spread of names for cumin and caraway.

Cumin seems to be split between Greek-derived names (cumin, kimyon, etc.; I've seen suggestions that this may be a borrowing from Afro-Asiatic) and Indo-Iranian names (zireh, jeera) that have spread as far as China (zi ran).

Caraway seems a little more random - it sounds mostly the same from English to Greek to Arabic to Persian to Sanskrit, but then in some languages (Georgian, Burmese, Hindi) it's called something similar to zireh/jeera.

And, of course, in many languages, there is considerable confusion about which spice is which. For instance, in French, cumin sometimes refers to cumin and sometimes to caraway.

If anyone can offer any specific information as to how these spices may have spread throughout the ancient world in order to result in such a strange configuration as we have today I would greatly appreciate it. Thanks!
Type: Question • Score: 5 • Views: 6,478 • Replies: 9
1
Reply Wed 12 Sep, 2012 09:00 am
@panoptical,
Quote:

And, of course, in many languages, there is considerable confusion about which spice is which. For instance, in French, cumin sometimes refers to cumin and sometimes to caraway.


Really? Are you saying the French confuse ground coriander (Cumin) with Caraway seeds?

I always thought that coriander was the seed pod of cilantro.

Coriander (Coriandrum sativum), also known as cilantro, Chinese parsley or dhania,[1] is an annual herb in the family Apiaceae.

Cumin and caraway are distinctly different from coriander as well as from each other. 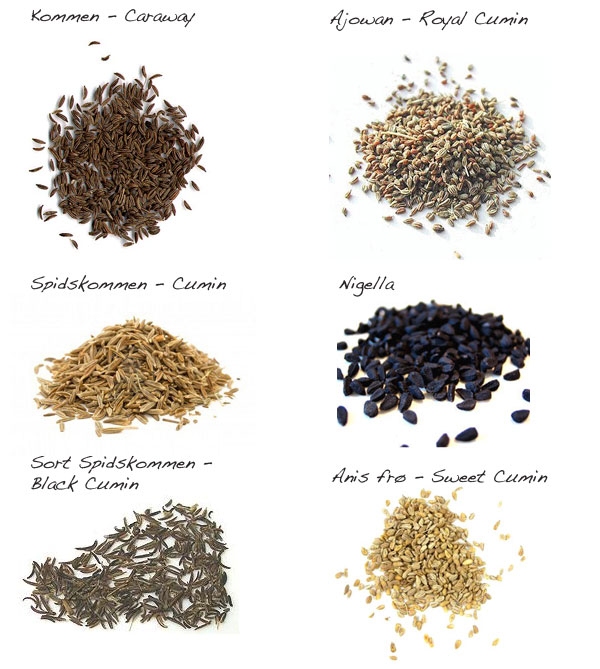 1 Reply
1
Reply Wed 12 Sep, 2012 10:46 am
@ehBeth,
Crap. I goofed.
I grow coriander, use the leaves in salads, guacamole and fish tacos, let the plants go to seed, put the seeds in a jar and then use them whole or grind them up when cooking chicken or fish.

Cumin is another thing. I use a ton of it too. I just got lost on the Spice Rack.

I searched for many year for vaRYEtte tea because I heard it was the spice of life.

I grow cilantro and let some of the planrts mature into seed heads which I pluck and dry for the sweeet taste of coriander.

Caraway has a Ashknazi and Slovak term (kimmel) it is used as a major fklavoring for rye bread , My gramma even called it kimmel rye
0 Replies
1
Reply Sun 20 Jul, 2014 01:58 pm
@Joe Nation,
Unfortunately in French, Spanish and Italian, the word "cumin" or "cumino" could be either cumin or caraway and the seeds look almost identical. If you cannot open the jars to smell the difference you will just have to take your chances!
0 Replies