Forums: Eccentric, Artists, Art
Email this Topic • Print this Page
1
Reply Wed 29 Feb, 2012 06:40 am
@Procrustes,
Some of Munch's work in the Verein Berliner Kunstler caused the museum to be closed. His work has often been divided into two periods

A.His work that was influenced by his association with Gauguin and was symptomatic of someone whose life was "madness on the edge"

B. His post 1908 stuff where hed been locked up in an asylum for a year after suffering a major breakdown.


It might be said that several of his very famous paintings, somehow surround the bridge wherein 'The Cry" (we call it "the SCream") was painted.
1 Reply
1
Reply Wed 29 Feb, 2012 06:43 am
@farmerman,
Wow, I never knew he went into an asylum. I remember seeing this dramatization about his life and they depicted him having some serious family issues. Is this true, cos my memory on that is a bit hazy.
1 Reply
1
Reply Wed 29 Feb, 2012 06:52 am
@Procrustes,
He was in a Copenhagen Sanitarium after he suffered his breakdown in 1908.His family issues as you mentioned were always said to ahve been tied up in the resolution of his life in post 1908 times. His work got rather weird and was mostly etchings and lithographs
0 Replies
1
Reply Wed 29 Feb, 2012 12:52 pm
@farmerman,
I seem to remember Tartarin (a terrific artist, I've seen her work) has synesthesia, though I could be confusing her with someone else.
1 Reply
1
Reply Wed 29 Feb, 2012 02:42 pm
@ossobuco,
Is she a present day artist? Ive not heard of her in my travels
1 Reply
1
Reply Wed 29 Feb, 2012 04:01 pm
@farmerman,
Long time a2ker, but not posting in recent years (last was late 2003). She was McBeans on abuzz.
0 Replies
1
Reply Wed 29 Feb, 2012 05:00 pm
fabulous stuff.
1 Reply
1
Reply Thu 1 Mar, 2012 04:54 pm
@PandaFan,
Verrocchio (Andrea del), the sculptor and teacher of Leonardo, was supposed to have contracted a type of "hatters disease" by the use of mercury and lead in his jewelry castings , gold purification and some lead in his bronze cast parts that he added to his sculptures. Im not sure about how mad he was credited with being but his famous loss of temper and rages were some of the reasons that LEonardo separated himself from Verrocchio.
1 Reply
1
Reply Thu 1 Mar, 2012 05:07 pm
@farmerman,
Swinburn, the Pre Raphealite poet, may have been a testbook case for "High function" autism He was known to be quite easily startled by sudden noises and was always in a state of toxic hygiene and total personal disarray. His early days at Eton were supposedly filled with him learning (and loving) extreme fits of sadomasochism. As he established his contacts with Rossetti and others of his clique. Swinburne's favoriet condition was to run naked about Rossettis crib and feign copulation with the ladies present.
I am not making this up. A friedn of mine who teaches Eng Lit at Temple was doing a biography pf Swinburne and got sidetracked on how really bizarre this guy was.
1 Reply
1
Reply Thu 1 Mar, 2012 05:12 pm
@farmerman,
farmerman wrote:

. His early days at Eton were supposedly filled with him learning (and loving) extreme fits of sadomasochism.

That's Eton for you.

0 Replies
1
Reply Fri 2 Mar, 2012 02:58 am
And Christopher Marlowe was killed in a tavern brawl (wonder if Spendius was there?), leaving the spotlight clear for Shakespeare to step into it.
1 Reply
1
Reply Fri 2 Mar, 2012 03:03 am
I thought Rabelais died in a tavern too, and went to google that. Apparently not. But I kind of liked what perhaps appochraphally were his will and last words:

Quote:
0 Replies
2
Reply Fri 2 Mar, 2012 03:04 am
I thought Rabelais died in a tavern too, and went to google that. Apparently not. But I kind of liked what perhaps appochraphally were his will and last words:

There are diverging accounts of Rabelais' death and his last words. According to some, he wrote a famous one sentence will: "I have nothing, I owe a great deal, and the rest I leave to the poor", and his last words were "I go to seek a Great Perhaps."

1 Reply
1
Reply Fri 2 Mar, 2012 04:14 am
@MontereyJack,
HE sorta reminds me of Sade in that Rabelais used the cloistered life of the Benedictine Monk to use as an outlet for his bawdy stuff, whereas SAde was just always in prison for murder or mayhem.
0 Replies
1
Reply Fri 2 Mar, 2012 04:19 am
@MontereyJack,
Shakespeare is a better writer in any event, compare The Jew Of Malta by Marlowe in which Barabas is just plain evil with the more nuanced portrayal of Shylock in The Merchant Of Venice.
0 Replies
1
Reply Fri 2 Mar, 2012 06:31 am
... and then there was the French Romantic painter, Théodore Géricault (1791–1824), who went to extraordinary lengths to capture authenticity in the subject of his larger-than-life oil painting, The Raft of the Medusa. Which was based on a contemporary scandal, the shipwreck of the Medusa in 1816. 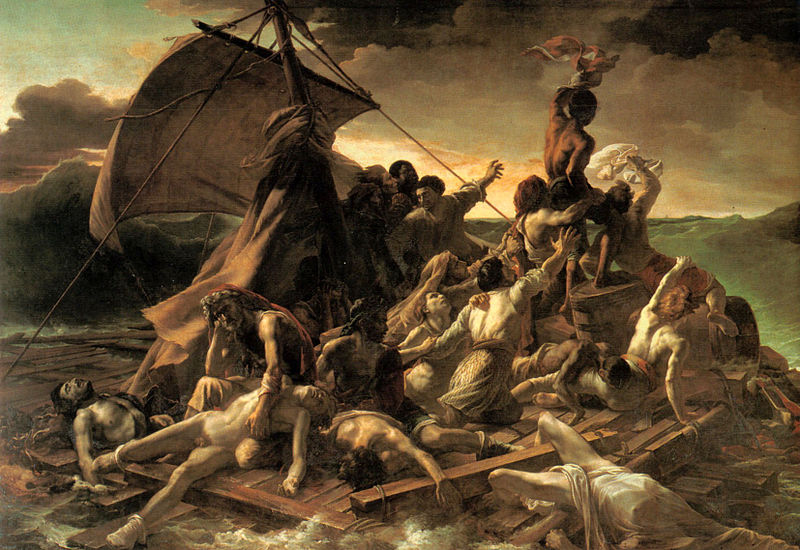 Géricault so thoroughly immersed himself in researching the full horror of his subject matter that he became completely obsessed by it :

According to the art historian Georges-Antoine Borias, "Géricault established his studio across from Beaujon hospital. And here began a mournful descent. Behind locked doors he threw himself into his work. Nothing repulsed him. He was dreaded and avoided."[26]

With particular attention to corpses:

To achieve the most authentic rendering of the flesh tones of the dead,[3] he made sketches of bodies in the morgue of the Hospital Beaujon,[25] studied the faces of dying hospital patients,[27] brought severed limbs back to his studio to study their decay,[25][28] and for a fortnight drew a severed head, borrowed from a lunatic asylum and stored on his studio roof.[27]

According to my art teacher in high school, the smell emanating from his studio caused his neighbours to complain to the authorities. I don't know for certain whether this was actually true or not ... but it has always stayed in my mind whenever confronted with images of The Raft!
Agh.
1 Reply
1
Reply Fri 2 Mar, 2012 06:36 am
It has just occurred to me that both examples I've provided here have been rather ghoulish. Death & corpses & decay.
I don't quite know why that is.
I will attempt to provide more cheerful examples of eccentricity next time!