Do you agree with Obama's decision to start killing more people? Then why do you support him?

Forums: Obama, Politics, War, U S Politics, Obamawars-Warcrimes
Email this Topic • Print this Page
0
Reply Sat 16 Jun, 2012 01:10 pm
@RABEL222,
Oh I love the comment about protecting businesses outside of our border being wrong as once more Jefferson did not agree that we did not have a duty to protected our shipping and the men who man those US flag ships no matter where they sail on the world oceans.

as once more Jefferson did not agree

My concerns are entirely different to yours, that's all, Finn.
It's the humanitarian rights of civilians that I've consistently posted about here. Your focus has been entirely different to mine.
There'd be quite a bit of difference between us about the definition of the term "terrorist" & what constitutes "terrorist actions", too.
I question the purpose (& the legality, too) of the attacks on the perceived "enemies" of the US in other countries, whether the attacks have been by invasion, drone attacks, or by whatever means.

The subject of this thread is: "Do you agree with Obama's decision to start killing more people? Then why do you support him?"
I'm responding to that as much as to your particular perspective.

What the US should expect from these nations is the elimination of the threat these terrorists pose to the US. How they do it is immaterial, as long as it is effective. If they do this, there will be no drone attacks for them to condone or condemn.

...The "job" that I contend we can expect our neighbors "get done" (if they don't want us to do it) is to eliminate the threat to us posed by terrorists within their borders. After all, this, and not participating with us in invading countries, is what determines whether or not we send Predators into their skies. .....

But you see, you are expecting (on your government's behalf) that the leaders of Pakistan, Yemen, etc, "eliminate" citizens in their own countries!
Or else you will invade their countries with drones to kill your perceived enemies. Along with the unfortunate "collateral damage" which inevitably occurs.
You can't see that you are advocating a course of action that many/most (?) citizens of those countries would not accept at all?
Why should they put US interests above their own sovereign interests?
What if they don't agree with US ideology about "terrorist threats"?
What if they see the attacks on their countries as acts of terrorism against them?
You are asking governments to act in your interests against the interests of their own people. Can you imagine the US ever agreeing to such an expectation? Of course not.

you have misstated the goal I've addressed or created a new one for the sake of your argument. The goal is not to neutralize support of terrorists, it is to neutralize the terrorists.

Conventional wisdom tells us that eliminating support for terrorists among the general population is a means by which the threat posed by the terrorists can be neutralized, but this is far too often seen as a simple matter of "live and let live."

I completely disagree.
In fact, as I've already argued, you might eliminate a few "terrorist leaders" but the drone attacks could well be creating new ones to replace them.
It is the drone attacks themselves which have lead to the growing hostility against the US.

If you want fewer enemies (call them "terrorists" or whatever you like), if you really want to win over the hearts & minds of the people, you want cooperation rather than hostility from them, then spend even a small proportion of the billions of dollars spent on military attacks on urgently-needed aid in those countries ... military force does not resolve the problem for the US, as outlined in this letter from prominent US religious leaders in a letter to Obama last year.
I'd argue that taking a similar approach now in Yemen (the poorest country in the middle east) Somalia & Pakistan would achieve far more for the US than attacking civilian areas to wipe out perceived enemies of the US. Simply because the attacks keep creating new enemies. :

...The military operation has so far resulted in the deaths of over 2,500 Coalition troops, including 1,600 from the U.S. Estimates are that over 20,000 Afghan civilians have died. And yet, the security situation is deteriorating and Taliban influence is spreading. The military situation is at best a stalemate. Al Qaeda barely exists in Afghanistan, but it has metastasized into Pakistan and has established itself in Yemen, Somalia, and other places..

... Moreover, this type of (humanitarian as opposed to military) aid is most effective -- both in terms of the development in Afghanistan, and the cost of the conflict. The past ten years have shown that we cannot broker peace in Afghanistan by military force; it is time to transition toward a plan that builds up civil society and provides economic alternatives for Afghans. ...

Aid, Not War in Afghanistan: An Open Letter to President Obama From Religious Leaders:
http://www.huffingtonpost.com/jim-wallis/aid-not-war-in-afghanistan_b_882289.html

In other situations the support of the locals is based on the good deeds the terrorist do for them: providing food, medical supplies and schools. The US supplies these nations with billions of dollars in aid; with great amounts specifically earmarked for humanitarian needs. Unfortunately, we cannot control what is done with all of this money and, obviously, a lot of it isn't making its way to the locals who support the terrorists who they see as benefactors..

But you see, when those "good deeds" are tied to militant strategies , they simply don't work.
As those religious leaders pointed out:

We see and hear the need for relief and development aid to be provided through these civilian aid organizations while untying it from a counterinsurgency strategy and involving and empowering local Afghan partners to the greatest extent possible.

A major reason for Obama's increase in the use of drone attacks is, I believe, is the fact that they are so relatively surgical and keep collateral deaths at a minimum. Obviously, he has decided that leaving the targets alone is not an option, and that the deaths of a small number of innocents is a necessity.

I think a more likely reason for the increase cost & almost no US casualties.
(Also because I believe allied nations would be most unlikely to supply further troops, following Iraq & Afghanistan. They have had enough.)

analysts point to several factors indicating that an expansion of U.S. targeted killings in the near term is likely. Drone strikes and special operations raids put fewer Americans in harm's way and provide a low-cost alternative to expensive and cumbersome conventional forces. This alternative is further enhanced given future cuts in the defense budget and a waning public appetite for long, expensive wars.

0 Replies
1
Reply Sat 16 Jun, 2012 08:48 pm
I came across this article (from last month's NYT) via a link from another article. (the third NYT article in a series assessing President Obama’s record)
I'm posting it here for anyone who hasn't read it.
It's long, but very detailed & informative. With lots of readers' responses. (1208 comments).
Well worth a read if you haven't done so yet.:

A Measure of Change
Secret ‘Kill List’ Proves a Test of Obama’s Principles and Will
By JO BECKER and SCOTT SHANE
Published: May 29, 2012, NYT 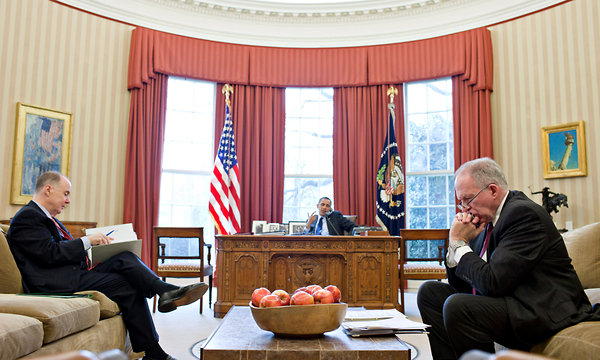 WASHINGTON — This was the enemy, served up in the latest chart from the intelligence agencies: 15 Qaeda suspects in Yemen with Western ties. The mug shots and brief biographies resembled a high school yearbook layout. Several were Americans. Two were teenagers, including a girl who looked even younger than her 17 years.

President Obama, overseeing the regular Tuesday counterterrorism meeting of two dozen security officials in the White House Situation Room, took a moment to study the faces. It was Jan. 19, 2010, the end of a first year in office punctuated by terrorist plots and culminating in a brush with catastrophe over Detroit on Christmas Day, a reminder that a successful attack could derail his presidency. Yet he faced adversaries without uniforms, often indistinguishable from the civilians around them.

“How old are these people?” he asked, according to two officials present. “If they are starting to use children,” he said of Al Qaeda, “we are moving into a whole different phase.”

It was not a theoretical question: Mr. Obama has placed himself at the helm of a top secret “nominations” process to designate terrorists for kill or capture, of which the capture part has become largely theoretical. He had vowed to align the fight against Al Qaeda with American values; the chart, introducing people whose deaths he might soon be asked to order, underscored just what a moral and legal conundrum this could be.

Mr. Obama is the liberal law professor who campaigned against the Iraq war and torture, and then insisted on approving every new name on an expanding “kill list,” poring over terrorist suspects’ biographies on what one official calls the macabre “baseball cards” of an unconventional war. When a rare opportunity for a drone strike at a top terrorist arises — but his family is with him — it is the president who has reserved to himself the final moral calculation.

“He is determined that he will make these decisions about how far and wide these operations will go,” said Thomas E. Donilon, his national security adviser. “His view is that he’s responsible for the position of the United States in the world.” He added, “He’s determined to keep the tether pretty short.”

Nothing else in Mr. Obama’s first term has baffled liberal supporters and confounded conservative critics alike as his aggressive counterterrorism record. His actions have often remained inscrutable, obscured by awkward secrecy rules, polarized political commentary and the president’s own deep reserve.

In interviews with The New York Times, three dozen of his current and former advisers described Mr. Obama’s evolution since taking on the role, without precedent in presidential history, of personally overseeing the shadow war with Al Qaeda.

They describe a paradoxical leader who shunned the legislative deal-making required to close the detention facility at Guantánamo Bay in Cuba, but approves lethal action without hand-wringing. While he was adamant about narrowing the fight and improving relations with the Muslim world, he has followed the metastasizing enemy into new and dangerous lands. When he applies his lawyering skills to counterterrorism, it is usually to enable, not constrain, his ferocious campaign against Al Qaeda — even when it comes to killing an American cleric in Yemen, a decision that Mr. Obama told colleagues was “an easy one.”

His first term has seen private warnings from top officials about a “Whac-A-Mole” approach to counterterrorism; the invention of a new category of aerial attack following complaints of careless targeting; and presidential acquiescence in a formula for counting civilian deaths that some officials think is skewed to produce low numbers.

The administration’s failure to forge a clear detention policy has created the impression among some members of Congress of a take-no-prisoners policy. And Mr. Obama’s ambassador to Pakistan, Cameron P. Munter, has complained to colleagues that the C.I.A.’s strikes drive American policy there, saying “he didn’t realize his main job was to kill people,” a colleague said. ....<cont>

When you go on a crusade you don't pull any punches with your headlines, do you, Robert? That's a bit over the top, don'cha think?

Do you agree with Obama's decision to start killing more people? Then why do you support him?

What part of this is "over the top", Merry? Maybe it's the factual part that is causing you the distress.