Forums: International News
Email this Topic • Print this Page
Reply Tue 27 Jan, 2004 03:42 am
Its criticality time here in the UK for our glorious leader.

He has so pissed off such a large number of his own MPs over Iraq, that on a vote that he himself has made crucial, he might lose.

Its about funding for Universities. The measure itself is worth voting FOR from a progressive stand point, but many MPs are likely to vote with the Conservatives just to try to oust Blair.

If the Govt. loses a vote on a 2nd reading such as this it will only be the 4th time in 100 years. And this for a Govt. with over 160 MAJORITY in the House of Commons.

The result of the vote will be known at 7pm tonight (London time, not Wabbit time).

On top of that, tomorrow, Lord Hutton publishes his report into the death of Iraq weapons expert Dr David Kelly. He's NOT going to say Blair had him murdered. (I think I can safely say that). But he might criticise Blair sufficiently so that (on top maybe of a lost vote tonight) he is forced to resign.

(or am I stopping you going to bed?)

Found out (via Germany) what a klutz is. Quite apt

War is a last resort, in his case it was giving in and pleasing the USA (ie., jr bush).

Lies about wmd's, almost a crime the worlds super powers and their intelligence was so wrong, or worse yet made to yield to politics of bush jr.
0 Replies
1
Reply Tue 27 Jan, 2004 01:35 pm
Quote:

Tony Blair has scraped home by just five votes in a crunch House of Commons test of his controversial plans to introduce university top-up fees. 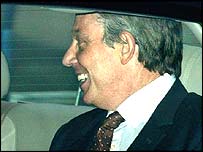 Blair has some reason to smile

Have you folks done away with the stocks, Steve? It would be nice to chuck the odd tomato that's gone off at him . . .
0 Replies
1
Reply Tue 27 Jan, 2004 01:50 pm
No I meant comfortable. there is a lot of support, both public and latent, for what is going on. It fits into the standard world view of the west of the last 500 years... We, intervene there, when it is in our interest.
0 Replies
1
Reply Tue 27 Jan, 2004 01:51 pm
yes he won by 5 votes, but he's not out of the fire yet------------------so God, please wave your magic wand or whatever & cast Blair into oblivion. PLEASE
0 Replies
1
Reply Tue 27 Jan, 2004 03:39 pm
Who is/are the option/s?
0 Replies
1
Reply Tue 27 Jan, 2004 04:11 pm
Blair isn't out of the frying pan just yet and he could be jumping straight into the fire with the upcoming Hutton report. I'm really actually unsure as to how I feel over Blair; I don't rate the alternatives to him any better than I do him...not that theres an election at the mo but if the Hutton report goes horrendously there could well be a re-shuffle.
Not impressed by the topping up of student fees either. Am hoping to go to Uni this year and increasing the amount students have to pay is a major worry and just the start of things to come I feel.
0 Replies
1
Reply Tue 27 Jan, 2004 04:40 pm
Acq, i couldn't agree with you less. Had you simply said the United States, i'd think you have a point. But when you up the ante to the entire English-speaking world, you have to add England, Canada and Australia, at the least, and the war was not popular before, and has not been popular in those nations since its inception.
0 Replies
1
Reply Tue 27 Jan, 2004 06:35 pm
Set., The war may or may not be popular, but there has been no ground swell that I am aware of questioning the basic assumption on which the war was predicated. That "we", when it is in our perceived best interest, will intervene with the "other". English speaking nations have been to a greater or lesser extent the hegemonic power for 300 years now. This has created a world view looks out on the rest of the world as an addendum to our interests That we can arrange that world for our advantage secure in the assumption that the "other" cannot reciprocate. But when that world does strikes back the reaction is shock, horror and even hurt. And, in that context, that a vigourous response is both justified and demanded. No one questioned Afghanistan. Britain, Australia and Canada acquiesced to varying degrees, and any reservations have not injured broad cooperation in many other areas. For example we communicate with the Mars rover througH Canberra Australia and there was no reaction in the Us when Australia turned back boat loads of fleeing Afghan refugees. The controversy over Iraq centers around whether or not the threat justified the response, not over whether or not an intervention response is a justifiable means of exerting our interests.

Anglophone politics has always been organized differently from continental politics. It is less centralized more tolerant of local power and divergent views. But it has had several thems which exert themselves consistently. Broad cooperation which functions independent of political issues, And, when push comes to shove, that the various part will act in concert if necessary, kicking and screaming all they way though they may.

Edward winslow, Mayflower passenger, founder of Plymouth, Plymouth rock "deity", and a collateral ancestor of mine. Died on a ship returning from Cuba, where he had been one of the commanders of the English siege of Havana.
0 Replies
1
Reply Wed 28 Jan, 2004 03:39 am
Latest is "Sun Says Blair Cleared by Hutton".

Setanta, there are lots of stocks underused, usually on village greens, dotted all around England. Probably why Blair prefers the metropolitan liberal elite than the carrot crunchers and turnip tossers.

Acquink. We didn't just acquiese over Afghanistan. We sent special forces to stand shoulder to shoulder with you in the effort to eliminate er....who was it now?...some Muslim guy with a beard, lives in a cave with sat phone and a stock of c4 explosive...anyway I supported that. The 911 attacks were against the whole "civilised" world.

What I dont get is invading Iraq which had nothing to do with 911, so hightening the risk of terrorism by forging an alliance between al Qaida and Ba'athist remnants, and then saying Iraq is the front line in the fight against terrorism. Actually of course I do "get" it, it just amuses me to think of the logical and legal contortions Bush Blair made to justify what had been decided upon from the outset.
0 Replies
1
Reply Wed 28 Jan, 2004 10:53 am
From the Hutton report:

[...]
On Tony Blair· No 'dishonourable, duplicitous, underhand strategy' by the prime minister
· There was nothing dramatic in Kevin Tebbit's evidence that Blair chaired the meeting that agreed to confirm Kelly's name, or any inconsistency in their evidence
· The desire of the PM to have a strong dossier may have subconsciously influenced John Scarlett and the Joint Intelligence Committee to produce a strongly worded document
[...]

SOURCE
0 Replies
1
Reply Wed 28 Jan, 2004 11:18 am
Acq, i still cannot agree that a majority of the population of the English-speaking world support the Shrub's adventuristic foreign policy. I also cannot for a moment subscribe to a notion of a monolithic anglophone world view for even three generations, let alone three centuries.

Right now, the radio is playing a clip of Blair defending (in rather self-righteous tone) the decision--with a good deal of audible dissent from the opposition (and might i speculate, back-benchers?). The parliamentary form of government in Canada, Australia and England is such that a government once elected can take almost any course of policy or action, and will only be answerable if they fail a vote of no confidence--a difficult trick for the opposition to pull off. American chief magistrates are far less able to manipulate government action unless they have an overwhelming majority, not just of party affiliates, but like-minded party members in the Congress.

Two hundred years ago, the English-speaking inhabitants of Australia were mostly transported convicts, and all Europeans on that continent were a decided minority. No Europeans yet lived in New Zealand. South Africa was by then ostensibly English, but the majority of inhabitants still spoke Dutch. Two hundred years ago, the majority of the population of Canada were still franco-phone, and a majority of the anglophone population were either American Tories, struggling to stay alive in a setting for which their previous experience had not prepared them, or they were recent immigrants from America. Far from there being any sense of cooperative policy between the fledgling United States and the British Empire, Napoleon was about to start on the military career which would lead to war between the United States and Britain within a decade.

One hundred fifty years ago, Palmerston was at the height of his political career, and would soon form the government which replaced the failed ministry which was about to plunge unprepared into a war with Russia. No other English Prime Minister has hated the United States so much, nor so often voiced his contempt publicly. Canada once again received the majority of its immigrants from the United States, but with the hangings after the War of 1812, and bitterness from the Aroostook "war" and not entirely unjustified suspicions about invasion and annexation, the United States was viewed by British Governors with distaste and mistrust.

England initially supported the invasion of Mexico in 1862, but to his credit, John Russell pulled out despite Palmerston's desparate longing for a causus belli for intervening in the American civil war. In 1866, 1867 and 1868, Irish-Americans who had fought on both sides of the American civil war participated in invasions of Canada, the most successful of which (most failed miserably) lead the English to drop Canada like a hot rock. Canada is still full of people who believe the U.S. would like to annex their nation.

I simply cannot believe in any monolithic anglophone world, with a coherent, cohesive world view and policies.
0 Replies
1
Reply Wed 28 Jan, 2004 11:45 am
Well it's certainly the last 24 hours for the Chairman of the Govenors of the BBC and I suspect his won't be the only head to roll.

Howard miscalculated and made the Hutton report a personal issue.

I'm sending him a crowbar to help him get his foot out of his mouth.
0 Replies