The environmentalist threat to music and musicians 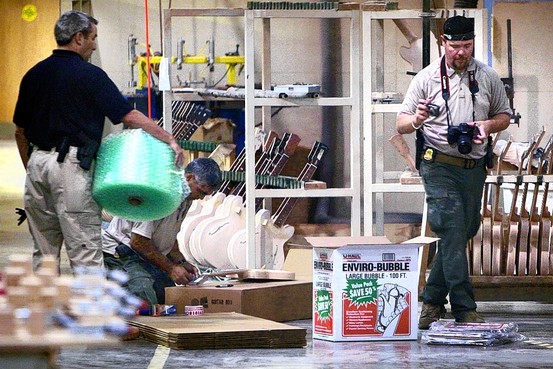 Agents from the U.S. Fish and Wildlife Service pore through the workshop at the Gibson Guitar factory on Wednesday morning.

Federal agents swooped in on Gibson Guitar Wednesday, raiding factories and offices in Memphis and Nashville, seizing several pallets of wood, electronic files and guitars. The Feds are keeping mum, but in a statement yesterday Gibson's chairman and CEO, Henry Juszkiewicz, defended his company's manufacturing policies, accusing the Justice Department of bullying the company. "The wood the government seized Wednesday is from a Forest Stewardship Council certified supplier," he said, suggesting the Feds are using the aggressive enforcement of overly broad laws to make the company cry uncle.

It isn't the first time that agents of the Fish and Wildlife Service have come knocking at the storied maker of such iconic instruments as the Les Paul electric guitar, the J-160E acoustic-electric John Lennon played, and essential jazz-boxes such as Charlie Christian's ES-150. In 2009 the Feds seized several guitars and pallets of wood from a Gibson factory, and both sides have been wrangling over the goods in a case with the delightful name "United States of America v. Ebony Wood in Various Forms."


The question in the first raid seemed to be whether Gibson had been buying illegally harvested hardwoods from protected forests, such as the Madagascar ebony that makes for such lovely fretboards. And if Gibson did knowingly import illegally harvested ebony from Madagascar, that wouldn't be a negligible offense. Peter Lowry, ebony and rosewood expert at the Missouri Botanical Garden, calls the Madagascar wood trade the "equivalent of Africa's blood diamonds." But with the new raid, the government seems to be questioning whether some wood sourced from India met every regulatory jot and tittle.

It isn't just Gibson that is sweating. Musicians who play vintage guitars and other instruments made of environmentally protected materials are worried the authorities may be coming for them next.

If you are the lucky owner of a 1920s Martin guitar, it may well be made, in part, of Brazilian rosewood. Cross an international border with an instrument made of that now-restricted wood, and you better have correct and complete documentation proving the age of the instrument. Otherwise, you could lose it to a zealous customs agent—not to mention face fines and prosecution.

John Thomas, a law professor at Quinnipiac University and a blues and ragtime guitarist, says "there's a lot of anxiety, and it's well justified." Once upon a time, he would have taken one of his vintage guitars on his travels. Now, "I don't go out of the country with a wooden guitar."

The tangled intersection of international laws is enforced through a thicket of paperwork. Recent revisions to 1900's Lacey Act require that anyone crossing the U.S. border declare every bit of flora or fauna being brought into the country. One is under "strict liability" to fill out the paperwork—and without any mistakes.

It's not enough to know that the body of your old guitar is made of spruce and maple: What's the bridge made of? If it's ebony, do you have the paperwork to show when and where that wood was harvested and when and where it was made into a bridge? Is the nut holding the strings at the guitar's headstock bone, or could it be ivory? "Even if you have no knowledge—despite Herculean efforts to obtain it—that some piece of your guitar, no matter how small, was obtained illegally, you lose your guitar forever," Prof. Thomas has written. "Oh, and you'll be fined $250 for that false (or missing) information in your Lacey Act Import Declaration."

Consider the recent experience of Pascal Vieillard, whose Atlanta-area company, A-440 Pianos, imported several antique Bösendorfers. Mr. Vieillard asked officials at the Convention on International Trade in Endangered Species how to fill out the correct paperwork—which simply encouraged them to alert U.S. Customs to give his shipment added scrutiny.

There was never any question that the instruments were old enough to have grandfathered ivory keys. But Mr. Vieillard didn't have his paperwork straight when two-dozen federal agents came calling.

Facing criminal charges that might have put him in prison for years, Mr. Vieillard pleaded guilty to a misdemeanor count of violating the Lacey Act, and was handed a $17,500 fine and three years probation.


Given the risks, why don't musicians just settle for the safety of carbon fiber? Some do—when concert pianist Jeffrey Sharkey moved to England two decades ago, he had Steinway replace the ivories on his piano with plastic.

Still, musicians cling to the old materials. Last year, Dick Boak, director of artist relations for C.F. Martin & Co., complained to Mother Nature News about the difficulty of getting elite guitarists to switch to instruments made from sustainable materials. "Surprisingly, musicians, who represent some of the most savvy, ecologically minded people around, are resistant to anything about changing the tone of their guitars," he said.

You could mark that up to hypocrisy—artsy do-gooders only too eager to tell others what kind of light bulbs they have to buy won't make sacrifices when it comes to their own passions. Then again, maybe it isn't hypocrisy to recognize that art makes claims significant enough to compete with environmentalists' agendas. (1 image)

I think your arguments lack careful analyses. The making of a guitar, no matter how venerable the models, should NOT be predicated on allowing old growth forests to be decimated. If these guys are buying threatened woods from threatened forests, then **** EM, drop the book on em!!!

Other than that, a certain number of elephants have to be killed every year to keep their numbers sustainable.
2 Replies
1
Reply Sat 27 Aug, 2011 05:43 am
@gungasnake,
Elephant killer:

Think you could handle that, Formerman??
1 Reply
2
Reply Sat 27 Aug, 2011 07:43 am
@gungasnake,
Oh yeah, let's all go hunt some elephants in our flip flops.
1 Reply
1
Reply Sat 27 Aug, 2011 09:05 am
@gungasnake,
Elephants are self aware and morn their dead. They may possibly be more self aware than most humans. That would include pretty blond bow hunters who wear inappropriate footwear while hunting.

BTW rosewood, ebony, and ivory all have superior synthetic replacements. There is no need for using these protected materials to manufacture new musical instruments.

1 Reply
1
Reply Sat 27 Aug, 2011 09:31 am
@gungasnake,
I didnt say manage the elephants, I said "Kill all the elephants".
Your arguments for anti environmental savvy and celebration of "sport killing" transcend good common sense.
Botswana manages its elephant herds and allows a certyain amt of killing of the beasts. Those are trageted for thinning and the meat is spoken for as is the ivory (unless the huntress wishes to hang the elephant as a trophy)
Doing rate for an elephant hunt is about 125000. I say make em pay ourt the ass if killing somehow allows them to assert their dykeness or compensate for a teeny weiner.

I hunt small game cause I like the flavor of rabbit, upland birds, ducks and geese.

Killing for trophies is the sport of assholes like you, gungasneak.
2 Replies
2
Reply Sat 27 Aug, 2011 09:54 am
@farmerman,
I don't kill for trophies but I don't have much in the way of judgment on those who do, which included TeddyRoosevelt. My own hunting is limited to whitetails, ducks, and geese.
1 Reply
2
Reply Sat 27 Aug, 2011 10:34 am
@farmerman,
My problem with hunting elephants is that they have been shown to be self aware and practice empathy and altruism. Something that most trophy hunters seem to lack.

As a result one could argue that elephants could be better practicing Xtians than many self professed Xtians. In effect, elephants might be the Jimmy Carters of the non-human animal kingdom.

Rap
1 Reply
1
Reply Sat 27 Aug, 2011 12:30 pm
@gungasnake,
Teddy Roosevelt had the redeeming feature of convincing Congress to establish wildlands. He later in life became a staunch "environmentalist" after he saw what happened to bison , passwenger pigeons, and several other species that were almost driven to extinction.

The problem with trophy hunting is that it conveys some sense of tribal approbia on the asshole hunter.
If you dont do trophy hunting for reasons that it makes no sense,yet approve of those who do trophy hunting, you are inconsistent. Sometimes your belief in unrestricted \freedoms borders on a worship of anarchy.
2 Replies
1
Reply Sat 27 Aug, 2011 12:33 pm
@raprap,
Elephant are some of the lweft over megafauna that have developed real "culture" .Some of the greatapes (orangs) dolphins and crows a;lso show signs of culture. I used to have a pet crow who would "preen " himself in front of a mirror.

Teddy Roosevelt had the redeeming feature of convincing Congress to establish wildlands. He later in life became a staunch "environmentalist" after he saw what happened to bison , passwenger pigeons, and several other species that were almost driven to extinction. ..

Who or what exactly do you think pays for most of the conservation of endangered animal habitats in the world?
0 Replies
1
Reply Sat 27 Aug, 2011 03:30 pm
@farmerman,
Foxes are said to be intelligent but you them run over on the sides of roads; you could spend the rest of your life looking for the first crow who ever got run over.
0 Replies
1
Reply Sat 27 Aug, 2011 03:46 pm
New Geico ad shows what leftists will be doing for music after the environmental whackos put all of the musicians other than horn players in prison for using hardwood frets:

Teddy Roosevelt had the redeeming feature of convincing Congress to establish wildlands. He later in life became a staunch "environmentalist" after he saw what happened to bison , passwenger pigeons, and several other species that were almost driven to extinction.

“We feel totally abused,” he continued. “We believe the arrogance of federal power is impacting me personally, our company personally and the employees here in Tennessee, and it’s just plain wrong.”