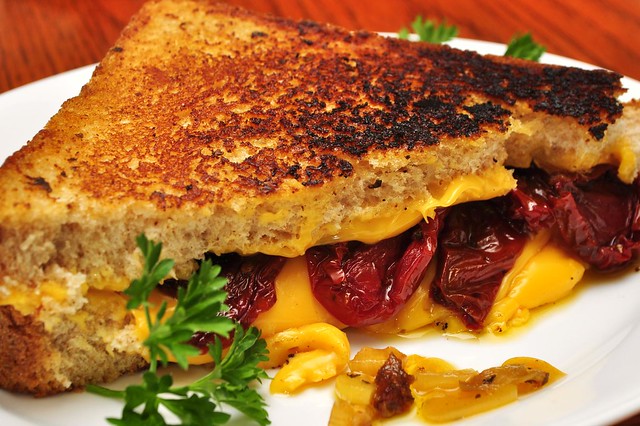 Grilled sourdough with ham and cheese 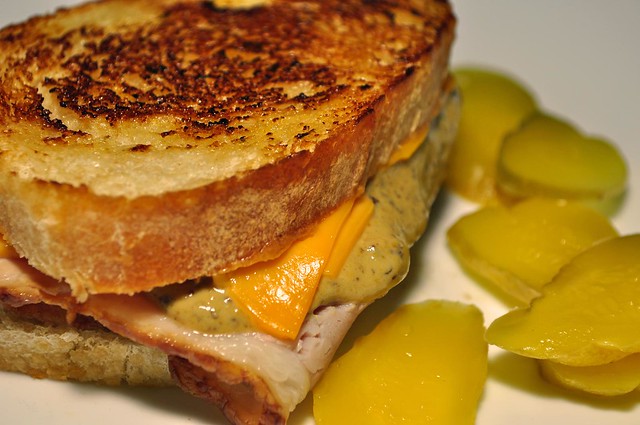 Drop a slice of bread on the grill. Add cheese, tomato, salsa, and another slice of cheese to keep it from leaking. Don't burn your tongue on the tomato.
2 Replies
1
Reply Thu 5 May, 2011 05:51 pm
@roger,
Tomato AND salsa?

Cycloptichorn
0 Replies
1
Reply Thu 5 May, 2011 06:00 pm
So far, Ms Piggy is anxious to try the manchego and jamon serrano sandwich, the mushroom croque monsieur (dammit, I used to have a croque monsieur device), the toasted almond (slivered?) and pecorino, especially if it was fresh pecorino, the sage and fontina sandwich (I love ital fontina), and the short ribs concoction.
Burp.
0 Replies
2
Reply Thu 5 May, 2011 06:33 pm
@roger,
Now that I think of it, a few thin slices of pepperoni might not be out of line.
0 Replies
2
Reply Thu 5 May, 2011 06:56 pm
As a total aside, back on Aug 16th, 2005, Kickycan started a thread called "the line." Montana and Chai joined in, as did I on about page 4. We had trouble figuring out what we were standing in line for. Recreational drugs may have been a factor according to some of the posts. Not me, of course.
It was eventually agreed that we were waiting on free grilled cheese sandwiches. The thread lasted 30 pages, believe it or not.
Had we known, had we seen some of the pictures here, we would still be in line. Perhaps some of us still are.
3 Replies
1
Reply Thu 5 May, 2011 07:11 pm
@realjohnboy,
Well, tada, here it is -

johnboy was in the line, just ahead of yall. And in front of me was an old lady with blue hair. We were waiting for whatever lay ahead. Suddenly she turned around, stepped to one side and snarled: "You bunch of ass-pinching, pot-smoking, foul-mouthed idiots...do your children and grand-children know how you have spent this afternoon?" There was silence for a moment and then was heard one small voice: "grilled cheese?"


That was from August, 2005.
Damn. It is hard to believe that this thread is closing in on 5 years old. And nothing ever happens. We wait...and wait... for grilled cheese sandwiches.
Kickycan started it, joined by Shewolfen, Montana, Chai and others perhaps no longer on A2K. I came in on about page 4 after more than a bit from others about recreational drugs.
I have always admired the relentless optimism of the people in the line here. Some day, somehow, we will get what we have patiently waited for and want most in the world: GRILLED CHEESE SANDWICHES.