Who's in a hockey pool?

Wonder how cheap I can get a
Canucks jersey 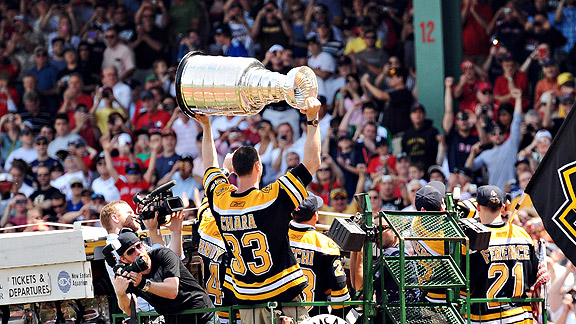 The Boston Bruins' Stanley Cup-clinching Game 7 victory over the Vancouver Canucks stands as
the most-watched National Hockey League game on American television since 1973.

The Game 7 victory was seen by about 8.5 million people on NBC, the Nielsen Co. said. That's the
biggest audience since a 1973 playoff contest between the Montreal Canadiens and Chicago Blackhawks. here's a good example of it --

slew-footing is one of the most dangerous infractions in hockey. It occurs when a player takes out an opponent's legs
out from under them, usually from behind, causing them to fall violently to the ice, risking injury to the back or head
as they fall backward.

(source)
0 Replies
2
Reply Tue 13 Dec, 2011 02:28 pm
One of the features of being an awkward player playing pond hockey
with a bunch of other spazzes is that you get to experience all sorts
of fouls, most of them unintentional, but nonetheless painful. I recall
being slew-footed -- I didn't know it was called that either -- and going
down hard on my hands and tailbone. Not fun.
0 Replies