You can tell all that from a footprint?
If you had not put that discription in i would have punted on small hopping marsupial. bettong, quokka or similar. The deep single toenail marks and longish foot. There looks to be a tail-drag mark

In waiting for OP to return, I looked at his/her profile and other posts and FWIW, he seems to live in OZ (Sunshine coast). Perhaps the photo's taken in Oz?


Well, if he's down there then it changes things a lot. There are no wombats in New Hampshire 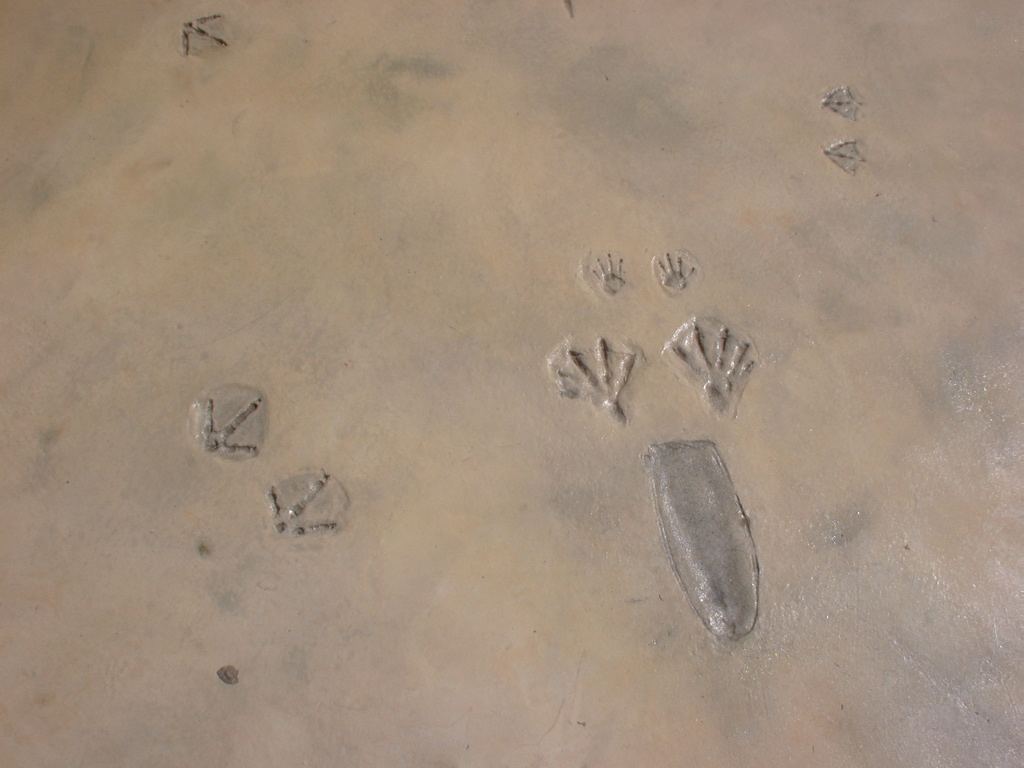 No, I'm not on the Sunshine Coast any more. Yes, there is plenty of beaver there, but more variety in Broome, WA, multiculti wonder of OZ.

I am working on a small community north of Broome called Burrguk. The area is rather undisturbed pindan (red dirt) plains with snappy gums, bloodwood, paperbark, and gubbinge. Wet season the spinifex grass grows high and thick, and dies out in dry season.

Driving to town about five pm, saw this dark-haired critter peering at me from the side of the road. We get some feral dogs around here, and I thought it might be one. Couldn't see that it was standing on the back legs when I first saw it, but as I approached (in car doing about eighty k's p/hr) it dropped down to all four and scuttled into the scrub.

If I was in Africa, I would say that it was a small hyena. All shoulders, and very narrow rear-end, with short back legs. Paler skin was visible through the very coarse black hair all over the body. The way it moved on all fours, it didn't look like it walked comfortably that way; more like a shuffle/scuttle kind of gait.

On my return, I scouted the area, and found three very clear tracks, and more unclear prints. I have other photos, some with glasses, and some HD footage. I'll see if I can load it onto utoob. Took some cement casts as well.

Been driving round this country for a long time, and never ever saw this kind of critter, nor those kind of tracks. Here's a link to the region. About 120 k's north of Broome, on the Dampier peninsular. http://maps.bonzle.com/c/a?a=p&p=7131&cmd=sp
1 Reply
1
Reply Sat 12 Mar, 2011 04:45 am
@Builder,
Are you sure it had no tail? That is relatively unusual and should narrow it down.

The best match for a footprint I can find is from a wallaroo, and they aren't found in the tropics at all. And they have a whopping big tail, and thick short fur.

Height of the critter standing would be under one metre, or three feet. Height crawling would be about knee height on an adult human, or about 450 mm, or 17 inches.
0 Replies
3
Reply Sat 12 Mar, 2011 06:13 pm
The footprint has all the hall marks of a macropod so still punting on a macropod of some kind. Also I think you are looking at two prints. The deeper impression of two "fingers" is the take off point.
To the right where the sand is broken is where the animals feet were when you starteled it. It gave a kinda sideways push on its right foot, brought it's feet together and with head down (which places pressure on the front toe area as indicated by the print) powered into the scrub.
wallabies, as you know, tend to frequent srub and bush country where low vergetaion forces them to move head down kinda burrowing down into the vegetation like they were on all fours. I've certainly seen that action here in the mountain bush.
Cant explain the lack of a tail or the wide shoulders narrower hips unless it was some trick of the light
Maybe it was mangy and thats why you saw skin under the hair.
2 Replies
1
Reply Sat 12 Mar, 2011 10:03 pm
@dadpad,
The prints are a hundred mm long. If you look closely, you can see five "fingers" on the print. I'll get busy later and load the video to utoob. All three prints show five fingers, some with very long claws, except for the "thumb".

If it was a wallaby, there would be clearer prints from the long rear feet. None were visible anywhere nearby. The sandy pindan soil was damp, and all the prints were fresh and clear. It would have been impossible for a wallaby to not leave rear footprints.

I've seen thousands of wallabys, roos, wallaroos, Dadpad. It wasn't anything like a roo. They are big in the arse region, and small up top. This critter was the opposite.

Thanks for your interest. Any info you might need, just ask.
1 Reply
1
Reply Sat 12 Mar, 2011 10:18 pm
@dadpad,
Here's a couple more pics. The possibility of overprinting three times in one square metre patch is highly unlikely.

I've seen thousands of wallabys, roos, wallaroos, Dadpad. It wasn't anything like a roo. They are big in the arse region, and small up top. This critter was the opposite.

The Thylacines had a body proportion sort of like you describe, but they definitely had tails and a distinct coloration pattern.

The number of native mammals in Australia with no tail (or a very short tail) are extremely limited (Koala's and Wombats are the only ones I can think of).

Could this have been a non-native animal which escaped from a nearby zoo or something? In other words, could it have been a hyena? How closely did it resemble one? But I don't think Hyena tracks look like the ones you posted. Hyena's look like dog tracks, and the tracks you posted look like a partially webbed foot with long toes and claws.

Could it have been a primate of some type? Lemur or something? I'm still thinking it might be a non-native animal.


1 Reply
1
Reply Sun 13 Mar, 2011 06:45 pm
dunno then....
I'm clutching at straws
spotted quoll?
Tassie Devil? has the body shape and colour you describe
Thylacine?.... I guess its possible though hardly likely.
The print doent seem to be a good match for any ferral cat or dog.
...beats me.

He's gunna get you!

Watch out for babies.....
0 Replies
2
Reply Sun 13 Mar, 2011 08:50 pm
@rosborne979,
This region has several clan groups of indigenous peoples, but due to the pearling history, many nationalities have come and gone in the past. Mostly from the Indo-china region. It's quite possible that a pet or two escaped from one of these migrants.

I've shown the prints and told the story to a few indigenes, and they mention the little people of their legends. Their descriptions vary, as with all legends, but the prints certainly don't resemble anything I've ever seen in the bush.

Did it look like a hyena? From what I can recall, it had the same build, but not the size, and not the large head and ears. The face was not pointed like a snout, and the eyes were not those of a dog. I mentioned the hyena only because of the shape of the torso and shoulders, to give an idea of proportion.

Most definately no tail.
2 Replies