Finally a country gets elections right

Forums: International News, Brazil, Clown Interest
Email this Topic • Print this Page
Reply Mon 4 Oct, 2010 11:44 am
http://www.bbc.co.uk/news/world-latin-america-11465127
A Brazilian clown has had the last laugh by winning a seat in Congress with more votes than any other candidate in Sunday's elections.

Tiririca, or Francisco Oliveira Silva to give him his real name, was elected as a federal deputy for Sao Paulo with more than 1.3 million votes.

Tiririca, or "Grumpy", had slogans such as: "It can't get any worse." 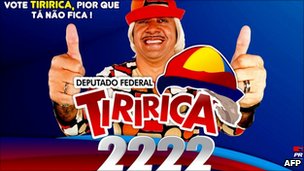 Brazil thinks its showing the world up, but we have been electing clowns for years.
Type: Discussion • Score: 0 • Views: 1,742 • Replies: 0
No top replies