Just get this Koran burning over with.

Forums: Books, Politics, Ethics, Book Burning, Koran
Email this Topic • Print this Page
Reply Fri 10 Sep, 2010 03:17 pm
Burning the Koran is offensive. I would never do it because I believe in the US as a modern multicultural democracy that should respect all religions. Of course, the US has freedom of speech that allows people to express themselves in crazy offensive ways.

But there are too things that really upset me about this whole thing.

1. The sheer stupidity of blowing this thing so out of proportion. This is a small crazy guy who was going to do a insanely offensive, but insignificant, thing in his little church. So what, this should have been a "news of the weird" kind of thing, maybe it should have made page four of some local paper. Sure, this would have made YouTube, but it really wouldn't have mattered in the big scheme of thing.

So what did we do? We splashed it all over the front page of every major news organization. This guy, a small time pastor of a small town church, is now an international figure getting calls from the secretary of defense and being interviewed on national TV.

We created this guy.

What's worse, is that now we have taken the act of burning a Koran and made it significant. Everyone now knows that if you want to be famous, all you have to do is plan a Koran burning and call CNN. Even if this guy doesn't do it, how are we going to stop any crazy guy who wants attention from taking this opportunity.

This is a mess that is fed by attention, and we have created a monster.

If we were smart, we would have simply ignored this fool.

2. The Hypocrisy of anti-Muslim demagogues.

Come on now, if you oppose building mosques in lower Manhattan, think that Islamic practices are repressive to women, claim that Islam is a cult and paint Muslims as an existential threat to modern democracy, the Koran burner is on your side. Sure, you might think this guy is too extreme, but he has the same goals that you do. In fact the Koran burner is promising to stop for a promise to stop building the Mosque.

So now they claim is that burning the Koran is the same a Mosque?


So, hell with it. Let this guy burn his Korans if he wants.

Those of us Americans who respect Islam as a religion and want a fair and just society should condemn it.

The fact is, the people spreading hatred and fear of Islam are far more destructive and dangerous than this guy. At least he is out in the open. It is the hatred that tries to be acceptable and respectable that is the real threat.
Type: Discussion • Score: 5 • Views: 3,307 • Replies: 26
No top replies
1
Reply Fri 10 Sep, 2010 03:21 pm
@maxdancona,
Why can't we all just get along and burn the entire series of Stephenie Meyer's Twilight books! Now wouldn't that be satisfying?

Why can't we all just get along and burn the entire series of Stephenie Meyer's Twilight books! Now wouldn't that be satisfying?

I left the DVD of Chronicles of Narnia outside on the driveway in the direct very hot New Mexico sun while I chanted "take that C.S. Lewis, may you burn in hell"


And Jesus and Walt Disney wept!

1 Reply
1
Reply Fri 10 Sep, 2010 03:57 pm
@dyslexia,
I am an atheist. I still love the Narnia books. In fact, burning them would make you just like the people who are building new churches. 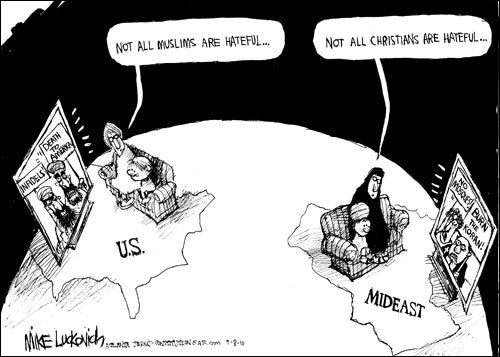 Roast marshmellows over it ?
2 Replies
1
Reply Sat 11 Sep, 2010 06:37 am
@OmSigDAVID,
Did you read my initial post before responding? Go back and read the second sentence I wrote.

" Just get this Koran burning over with."

Roast marshmellows over it ?


Hey! You bring the marshmallows and I'll bring the Hershey's chocolate bars and graham crackers!

" Just get this Koran burning over with."

Roast marshmellows over it ?

Hey! You bring the marshmallows and I'll bring the Hershey's chocolate bars and graham crackers!


We 'll meet at a Korean restaurant
(but NOT in North Korea).
0 Replies
0
Reply Sat 11 Sep, 2010 08:06 pm
I say we burn all ancient philosophy books so we don't ever have to put up with Aristotle theories!

Burn Aristotle to the stake...!

Ps- Aristotle is a wonderful philosopher, infact I call him "The philosopher".

Death to Aristotle...
0 Replies
1
Reply Fri 1 Jun, 2018 07:31 pm
@maxdancona,
I hope you didn't stop at Narnia, there's greater stuff out there in the world of old skool fantasy fiction. Take LOTR, or The Chronicles of Thomas Covenant, or the Shannara series. Even the "Twins" trilogy in the Dragonlance series (the rest of Dragonlance is utter _____).
0 Replies