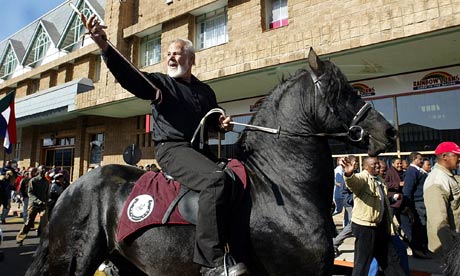 Terreblanche means "white earth" in French, the language of the politician's Huguenot ancestors.
His murder - reportedly being hacked to death with a panga on his farm - brings a gory end to a singularly ineffectual political career.

Terreblanche, who was 69, and his Afrikaner Weerstandsbeweging (Afrikaner Resistance Movement - AWB) came to prominence in the early 1980s.

At the time, the government of PW Botha was considering a constitutional plan allowing South Africa's Asian and coloured (mixed-race) minorities to vote for racially-segregated parliamentary chambers.

For the likes of Terreblanche, this was the start of the slippery slope towards democracy, communism, black rule and the destruction of the Afrikaner nation.

Claiming on occasion to be a cultural organisation - albeit one with sidearms and paramilitary uniforms - Terreblanche and his men promised to fight for the survival of the white tribe of Africa.


Their political heartland was in Ventersdorp - a decaying farming town amid the maize fields some 150km (100 miles) west of Johannesburg.

From that base, the AWB established cells, mostly among the Afrikaans farmers in the north of the country - though occasionally Terreblanche would venture into urban Afrikaans communities to hold a public meeting.

"The leader" - as followers invariably called him - would arrive flanked by members of his black-clad inner circle, the Iron Guard.

"Cover him," an Estuary English accent would bark - the voice of Iron Guard commander Keith Conroy, the former British soldier reputed to speak barely a word of Afrikaans.

Terreblanche's thunderous voice and magnificent style of delivery - alternating between roar and husky whisper, with gestures to match - helped to disguise the complete meaninglessness of what he was saying.
His oratory would sweep from the plight of white farmers, to ancient Greek philosophy, to the state of the Soviet Union, without any apparent logic........


I have learnt with shock of the brutal killing of Mr Eugene Terreblanche last night, allegedly by people who were working for him.


Two suspects have now been arrested and police are still doing their further investigations. The Minister and the National Commissioner of Police have already visited the scene.

We strongly condemn such acts of violence. People should use legal and peaceful means to resolve differences of any nature including labour disputes. We should uphold the right to life that is enshrined in the Constitution and abide by the rule of law at all times.

As government, we convey our profound sincere condolences to the family, friends and colleagues of Mr Terreblanche during this difficult time. I have personally communicated to the Terreblanche family and have spoken to Mr Terreblanche’s daughter and conveyed my condolences.

We said last week during our visit to the Bethlehem settlement in Pretoria West that we need to seriously discuss heritage and reconciliation further in our country in a manner that cements our ties as one diverse nation.

None of our problems are insurmountable, we have come very far already as a nation and we have a great future together.

We just need to be mature and work well together as various parties and groups to lead our people to a prosperous, united and harmonious future. All leaders must act responsibly and work with government to control emotions and anger during this period.

Leaders and organisations must not to use Mr Terreblanche’s death to score political points. Instead, they must work harder to unite our people.


JOHANNESBURG: The South African President, Jacob Zuma, has called for calm over the killing of the white supremacist Eugene Terreblanche.

The killing has caused shock waves at a delicate time for South Africa, just 10 weeks before it is to host the soccer World Cup. The government is trying to reassure tourists over security fears and to play down recent racial tensions.

Police say Mr Terreblanche was hacked and bludgeoned to death after an argument with two workers on his farm outside Ventersdorp in North West Province.

Mr Terreblanche, 69, was the leader of the Afrikaner Resistance Movement, or AWB, formed in the 1970s, which bitterly opposed black majority rule.

The AWB said it would avenge his killing but urged members not to react immediately.

The group's secretary-general, Andre Visagie, said yesterday that it would meet on May 1. ''We will decide upon our actions to avenge Mr Terreblanche's death. We will take action and the specific action … will be decided upon at our conference.''

Although the killing comes amid increased racial tension, police said it was motivated not by politics but a dispute over wages. Captain Adele Myburgh said Mr Terreblanche was attacked by a 21-year-old man and a 15-year-old youth who worked for him but who told police they had not been paid.

''Mr Terreblanche's body was found on the bed with facial and head injuries. There was a panga [machete] on him and knobkerrie [African club] next to the bed," Captain Myburgh said.

Mr Visagie said Mr Terreblanche, who was apparently alone and asleep at the time of the attack, was beaten so badly ''he didn't look like Eugene any more''. He said his only security were his dogs, which were ''neutralised''.

Mr Terreblanche was one of the most divisive figures in South African politics, believing in white supremacy and racial segregation. He recently declared: ''Our country is being run by criminals who murder and rob. This land was the best, and they ruined it all. We are being oppressed again. We will rise again.''

From the 1970s the AWB sought to terrorise blacks and fought to retain the system of racial segregation introduced in South Africa by the National Party in 1948..........

Hardly surprising...he beat a farmhand nearly to death and went to prison for it...as well as his political activities, but it could trigger trouble.

Your comment would be more palatable if he were the only one killed. Many people are being murdered and driven off their family farms simply because they are white. Meanwhile the money sent by Britain to pay off the whites is being used to prop up Mogabe.
1 Reply
3
Reply Sun 4 Apr, 2010 09:09 am
@Ionus,
Are you thinking Zimbabwe?
1 Reply
-4
Reply Sun 4 Apr, 2010 09:46 am

He shoud have evacuated.

David
0 Replies
1
Reply Sun 4 Apr, 2010 09:58 am
@dlowan,
Oops. He was the south african twit wasnt he...it may be of interest to note south africa has the same percentage of whites as the USA has blacks. I am sure he was motivated at least partially by what he saw in Rhodesia and then Zimbabwe. It is somewhat surprising that south africa has done as well as it has, given the problems, though now they have one less. I wonder if his death will have a negative effect on white farmers, though...
0 Replies
2
Reply Sun 4 Apr, 2010 04:46 pm
Had you guys actually not heard of this man before I posted about his death? (I mean those who have posted on this thread.)
2 Replies
3
Reply Sun 4 Apr, 2010 06:12 pm
@dlowan,
Quote:

The AWB said it would avenge his killing but urged members not to react immediately.

Oh great. This is just what South Africa needs!

A shocking, brutal end for Terreblanche . I wouldn't wish such a death on anyone.

But by the same token, he was responsible for some shocking & brutal events, too.

Good grief...I was beginning to think nobody on this board knew about the damn man, nor had any inkling of what this might mean to South Africa.

Does the weaponry found by him sound suspicious to anyone else? Almost seems like a framing. Like if another white supremacist wanted him out of the way for example.

edit: nevermind, seems like they've found suspects and everything. Which doesn't completely preclude that the suspects were framed, but still sounds more specific than I'd thought.

http://news.yahoo.com/s/ap/af_south_africa_white_supremacist
1 Reply
1
Reply Sun 4 Apr, 2010 07:07 pm
@dlowan,
I recognised him in his younger photos but I havent heard much of him lately so i didnt know what had happened to him. South Africa is the last stand for a lot of whites who have been driven out of their family homes all over Africa.

I am more preoccupied with Zimbabwe. If its crops fail again it will involve more than Zimbabwe. No one was concerned about the apartheid that was happening all over Africa, only with South Africa. The biggest hypocrits were Americans who had just got rid of something similar themselves. Isnt anyone allowed to operate to a different time schedule ? If the USA ends apartheid, then South Africa must also....ok, but when ? Immediately was the answer.

But no pressure was put on the rest of Africa who was practising apartheid against whites and asians. Black is the new sainthood. Now these same clowns have moved onto homosexuals. Homosexual is the new black. None of these clowns ever revisits the disaster they created.

Many in these African colonies wanted the white man to prevent inter-tribal violence and to treat all blacks equally. Many esp women want the return of the white man. They are sick of all the vilolence and poverty. In such circumstances it is not surprising such a man existed.
0 Replies
1
Reply Sun 4 Apr, 2010 07:08 pm
@dlowan,
Quote:

Horrible as it was, I think it's kind of a fitting end for such a man.

It is certainly not a surprising end at all, Deb.
0 Replies
2
Reply Sun 4 Apr, 2010 07:22 pm
@sozobe,
As I said, he was imprisoned for nearly murdering one of his black farm workers. I have little doubt he was a brutal employer.

He was a nazi, basically.

Here's wikipedia on him:


Here are some speeches, the first video showing the altered swastika emblem his gang favoured:

And, the battles begin:

0 Replies
1
Reply Sun 4 Apr, 2010 07:36 pm
I saw a doco (was it Jon safran? some similar other wise ass looking at racist fundementalist type organisations) about Terrablanche and his movement.
They all seemed rather silly to me.
0 Replies
1
Reply Tue 6 Apr, 2010 06:08 pm
Report from the BBC today, including video: South Africa face-off at Eugene Terreblanche hearing.:

Black and white South Africans have scuffled outside a court building as two farm workers were charged with the murder of a white supremacist leader.

Police stepped in to stop the face-off between people from the local black community and supporters of Eugene Terreblanche, found dead on Saturday.

Officers built a barricade from razor wire to keep the two groups apart in the north-western town of Ventersdorp.

The killing has raised racial tensions in the country. ...<cont>

http://news.bbc.co.uk/2/hi/africa/8604375.stm
0 Replies
1
Reply Tue 6 Apr, 2010 06:38 pm
I had never heard of him before. His brand of hatred always surprises me though. I hope this doesn't ruin or create anymore racial tensions in S. Africa. I hope he and his politics fade into obscurity.
0 Replies