Do fish get lonely?

One sees them here and there...sometimes in shops and places like that, sometimes in homes. A single goldfish, say, in an aquarium.

I always feel sorry for them...but, fish people...do you think it matters to them?

Or perhaps different species are different? A lone sardine, or herring, for instance, is almost unthinkable.

I have a silly pet fish on my iPhone, and whenever I visit it, I worry about it being lonely! A VIRTUAL fish! What an idiot.

Do fish get lonely?

0 Replies
1
Reply Mon 15 Mar, 2010 08:30 am
@dlowan,
Hello dlowan.
I use to breed African Cichlids. Some pairs or mates I had for over ten years. When one of the mates would go to fish heaven, or, if I took a female out to isolate during development of fry, yes, the other partner seemed forlorn and lonely to me. Lack of movement, by alone fish, was also an indicator.
1 Reply
1
Reply Mon 15 Mar, 2010 08:37 am
@dlowan,
"but, fish people"

are you looking for trouble?

actually, folks with a single fish in a bowl are just experimenting with the lifestyle...

and please don't ask about the feeder fishes feelings, they obviously only feel fear.


the only fish I got that lives alone is a big convict cichlid female, and it is her choice.

(she eats whomever I put in with her before they can work out a friendship...)
1 Reply
2
Reply Mon 15 Mar, 2010 09:33 am
@dlowan,
When most fish live alone, more often than not they don't live as long. There are some notable exceptions, for example Betta {sp?} (Siamese Fighting Fish), Oscars and some African Cichlids. These large fish tend to be very agressive and can get nasty and shorten the lives of their compatriots.

Serious answer: without anthropomorphising (giving human feelings to animals), fish need stimulus. So, if in a tank there is another fish that looks like them , it makes them move around more, getting more exercise and helping them stay lively.

Also with another fish of same type, they respond positively to the 'safety in numbers' scenario. In a community (tank) of other fish, when they're chased or attacked by other agressive fish, they can get lost in the crowd, thus increasing their chances of survival.
1 Reply
2
Reply Mon 15 Mar, 2010 02:21 pm
@dlowan,
It certainly depends on the species. Some schooling fish can have their health suffer if left alone they actually need to be in a group for protection from other species of fish and all. Other fish become stressed with company nearby and will attack them viciously if kept near others.

And some fish (like the Angel Fish) actually seem to say hi to their owners (they are very expressive fish) but it's probably just because they know we feed them and want more food.
1 Reply
1
Reply Mon 15 Mar, 2010 02:56 pm
@alex240101,
Goodness!! After a childhood reading Konrad Lorenz, and hence an intimate knowledge of the life of what was presumably the European cichlid, I had forgotten about fish like that, that form enduring pairs!


Don't the boys of the cichlid world do a lot of heavy duty daddying?
0 Replies
1
Reply Mon 15 Mar, 2010 02:57 pm
@Ragman,
So...the poor lone goldfish which triggered this may not be lonely, but suffer from under-stimulation?
0 Replies
1
Reply Mon 15 Mar, 2010 03:04 pm
@Robert Gentel,
Does the schooling fish's health suffer in the sense of actually being more likely to be killed, or do you mean that they are stressed by being without their school, even if not being hunted? If you are able to answer that!


Goldfish seem to respond to humans, too.


It was very funny the other night: we were in a restaurant with a huge aquarium (I really appreciated goldfish for the first time...in the huge tank, where they could really swim, they looked glorious)...anyway, I was fascinated and asked to be seated very near the tank. I forgot about them after a bit, when I suddenly felt that sense of being watched. I looked up...and all the goldfish (about 20 of them) had come to the corner of their tank and were staring at us!

I couldn't put fish in a tank to be preyed on!!! (If that's what you mean) It's bad enough knowing that all those prey animals are out there being scared, without having it in my living room!!

(she eats whomever I put in with her before they can work out a friendship...)

you grow them in the big tank in a system.then you add the predators as the chain allows... (they mostly eat the very young)

anyways. she ate her catfish cleaner buddy (he was twice her size

) and after she gave birth, she ett her mate, who was only half her size. (not very nice, but kinda common)

I don't need any more baby convicts, and no sacrifices have been demanded by Neptune recently.

Does the schooling fish's health suffer in the sense of actually being more likely to be killed, or do you mean that they are stressed by being without their school, even if not being hunted? If you are able to answer that!

IMO both. Schooling fish seem to live to school, they just go back and forth in a tank all day long with their school of fish. Sometimes the interactions are funny, like when I had a sick fish whose school would reject him. It was sad to see how hard he tried to hang out with them but they would have none of it.
1 Reply
1
Reply Tue 16 Mar, 2010 07:20 am
@Robert Gentel,
That fish of yours has haunted my dreams!

I murdered a friend's poor fish once.

It had become trapped in something in the tank, and the other fish had eaten most of its fins. Awful. Once released, it couldn't control its attitude in the water, swim remotely normally etc.

My friend had a big thing about not interfering in nature..(eg allowed her dog and cat to suffer inordinately before euthanasing them...I nearly took them off and had that done, thinking I might be able to pretend they had died...seriously! It was so horrible. I offered to pay and all.)

I noticed the other fish were slowly eating the injured fish alive. Its scales had become all ragged where they had eaten THEM, and I knew flesh was next.

I am afraid I killed the poor thing myself, and endured the storm of anger rather than letting this go on. We were sharing a house at the time.

1 Reply
1
Reply Tue 16 Mar, 2010 10:14 am
@dlowan,
Well I probably wouldn't have killed the fish myself (I'm bad about the putting animals out of their misery thing too), but I'd have at least put it in an isolation tank.

But speaking of fish being lonely and needing interaction you can always take your fish for a walk like this guy: 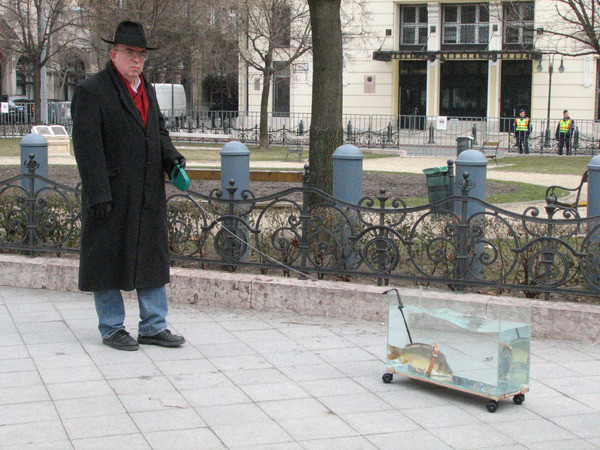 I don't think walking a fish is aerobic enough.

Unless you could buy it a reverse scuba outfit, and harness it to a skateboard!
0 Replies