1Dinosaurs were a bad idea to begin with

2They had gone on quite long enough.

Who says? And why?

I imagine they thought they were a great idea, and would have been quite happy to keep going!
1 Reply
0
Reply Mon 8 Mar, 2010 05:20 am
@dlowan,
The two part explanation of why the dicosaurs went extinct was a series of discussion lines that Dave Raup included in his classic text "Extinction, Bad Luck, or bad genes". RAup and another paleo dude named Sepkoski developed a timeline of extinction that showed that extinction events were spread about in about 26 million year cycles on the earth.
His explanation above was an attempt at humor in a book that ued lots of gambling statistics and looks at the fossil record to develop a simple thesis that. "If you are alive now, chances are almost 99.999% that your own species will go extinct".
RAup used extinction as a great exemplar of how "Niches" are lweft open periodically so that new species can adapt to a changing environment.

David M. Raup is a University of Chicago paleontologist. Raup studied the fossil record and the diversity of life on Earth. Raup contributed to the knowledge of extinction events along with his colleague Jack Sepkoski. They suggested that the extinction of dinosaurs 65 mya was part of a cycle of mass extinctions that may have occurred every 26 million years.

In addition to his time at the University of Chicago, Raup has taught at Caltech, Johns Hopkins, and the University of Rochester. He was also a curator and Dean of Science at the Field Museum of Natural History in Chicago as well as a visiting professor in Germany at Tübingen and on the faculty of the College of the Virgin Islands. Raup was heavily involved through his career in joint programs with biology and in promoting training of paleontologists in modern marine environments. In 1994, he retired to Washington Island in northern Lake Michigan. Currently, he assists the Santa Fe Institute to develop methods and approaches to dealing with the evolutionary exploration of morphospace.

1Dinosaurs were a bad idea to begin with

Quote:
2They had gone on quite long enough.

There's no response that would be forthcoming, it was just an attempt to provide some smartassness (especially using a numbered sequence, which is a very popular way of itemizing things for scientists to evaluate at symposia. Raups comments became rather popular among humor starved paleontologists so that some wag even started printing tee shirts and several kids were sporting them .

summary: I wouldnt think too deeply about it. DAve Raup was always entertaining at talks about extinction. 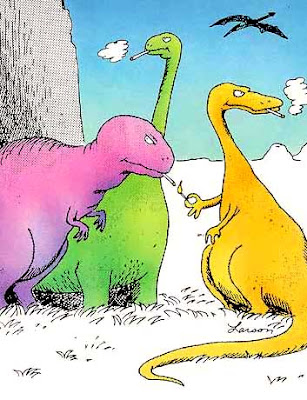 The real reason dinosaurs became extinct.
0 Replies
0
Reply Mon 8 Mar, 2010 02:58 pm
@farmerman,
Cool!
0 Replies
1
Reply Mon 8 Mar, 2010 04:55 pm
Thinking about it, who says they are extinct ? Ever eaten a chicken ? It seems the T-Rex's closest living relative (based on DNA) is the chicken.
1 Reply
1
Reply Tue 9 Mar, 2010 08:44 am
@Brandon9000,
Back to Brandon's original query - there's an early warning system for tracking asteroids that might intersect earth's orbit >
http://www.jpl.nasa.gov/asteroidwatch/overview.cfm
> and it's linked to astronomers around the world. There are countermeasures, even:

The spacecraft navigation technology for impacting a small body was successfully demonstrated when the Deep Impact spacecraft purposely rammed comet Tempel 1 on July 4, 2005, to scientifically examine its composition.

Back to Brandon's original query - there's an early warning system for tracking asteroids that might intersect earth's orbit >
http://www.jpl.nasa.gov/asteroidwatch/overview.cfm
> and it's linked to astronomers around the world. There are countermeasures, even:

The spacecraft navigation technology for impacting a small body was successfully demonstrated when the Deep Impact spacecraft purposely rammed comet Tempel 1 on July 4, 2005, to scientifically examine its composition.

Although Hollywood has created some colorful methods for stopping an object that is on a collision path with Earth, no government agency, national or international, has been tasked or accepted the responsibility to stop such an asteroid, should one be discovered. But there have been a number of academic and some technical studies, not to mention numerous movies, on how a devastating asteroid impact might be avoided. Since asteroids outnumber comets 100 to 1 in the inner solar system, the asteroids, rather than comets, represent the majority of the nearer-term threat to our planet.

Because of the wide range of possible sizes, trajectories and warning times for Earth-threatening asteroids, there will be a corresponding wide range in the levels of challenge in providing an appropriate response. Unless there are a few decades of warning time, hazardous asteroids larger than a few hundred meters in diameter will require enormous energies to deflect or fragment. In the rare case of a large threatening asteroid, nuclear explosions that could push or fragment the object might provide a sufficient response.


Like I said, we'll probably party until something awful is staring us in the face, at which point, it will likely be too late.
1 Reply
0
Reply Tue 9 Mar, 2010 09:05 am
Help I'm steppin' into the Twilight Zone
Place is a madhouse, feels like being cloned
My beacon's been moved under moon and star
Where do i go now that I've gone too far
Soon you will come to know
When the bullet hits the bone . . .

Uhm . . . what was the relevance of that last post?

EDIT: Glad to see that you cleared your clipboard, and edited that last post. The Beatles have precious little to do with this topic.

...Like I said, we'll probably party until something awful is staring us in the face, at which point, it will likely be too late.


Well it's not as bad as you think: for reasons unrelated to asteroids I was at one point involved in research involving CEPs (=Circular Error Probable) >
http://nuclearweaponarchive.org/Usa/Weapons/Mmiii.html
> so when the old Sovs finally collapsed, I asked one of the physicists involved in the same research whether we might finally set some useful task for all those ICBMs by firing them straight up in order to clear up useful earth orbits from all the old junk cluttering them. He looked at me in horror and said "Oh, no, all those CEP numbers we ever gave were riddled with errors!"

I had always wondered about that one, mostly because of magnetic lines over the pole (presumably where the things were to be used) being very different from the east-west orbits where they were being tested. I still don't know the answer to your question, but I'm assuming that with several years' warning of a large asteroid intersecting our orbit we should be able to perfect whatever Star Wars guidance systems exist right now.
0 Replies
2
Reply Tue 9 Mar, 2010 10:04 am
You're all wrong: dinosaurs never became extinct. We're just not looking hard enough for them.
0 Replies
1
Reply Tue 9 Mar, 2010 11:30 am
@Ionus,
Quote:

Thinking about it, who says they are extinct ? Ever eaten a chicken ? It seems the T-Rex's closest living relative (based on DNA) is the chicken

Thinking about it, who says they are extinct ? Ever eaten a chicken ? It seems the T-Rex's closest living relative (based on DNA) is the chicken

You really should stay current. Perhaps I can help you stay abreast....

I'm starting to feel a little bit that way.

I expect an apology. Just because you dont know it doesnt mean it is unknown.
0 Replies
1
Reply Tue 9 Mar, 2010 04:50 pm
@Ionus,
Youre walking in my court and I dont know of any discoveries of Trex (or any dino) DNA. Youve been reading at a 2nd grade level again.


You , also, ought to read that Guradian Article a little more closely. SChweitzer HAS NOT found any DNA. Shes found a few proeins and some collagen and (in the tech literature) Osteocalcin. NOT DNA. DNA is made of sequences of pairs of nucleotides which form (in groups of 3) amino acids, which form proteins. The sequencing of DNA from Trex may yet happen but they aint even close yet. We need to read more carefully if we want to plop information out there.
2 Replies
1
Reply Tue 9 Mar, 2010 05:13 pm
@farmerman,
HOW TO MAKE A DINOSAUR
STEP 1)Find a piece of amber with a blood sucking insect from the dinosaur era trapped in it.

STEP 2)Extract the blood that insect sucked from a dinosaur.

STEP 3)Use the dinosaur's genetic code (DNA) found in the blood cells as blueprints for another dinosaur. If pieces of the DNA are missing, fill in the gaps with frog DNA.

STEP 4)Use these blue prints to create a dinosaur egg.

STEP 5)Hatch the dinosaur in an incubator.