Is Charley Sheen's number up?

Charlie Sheen has been arrested in Aspen on charges related to an alleged case of domestic violence.

Aspen police spokeswoman Stephanie Dasaro said Sheen was arrested Friday on charges of second-degree assault as well as menacing, both felonies, and criminal mischief, a misdemeanor.

Police said the alleged victim didn't have to be taken to the hospital but didn't identify who the victim was.

Police said the 44-year-old actor will be held without bond in the Pitkin County Jail until his first court appearance.

The court was closed for Christmas and no date for his appearance has been set yet.

Four years ago his ex Denise Richards claimed that during their marriage he abused her to the point of making death threats. I am too lazy to look I think others have claimed being abused by him as well.
Type: Discussion • Score: 1 • Views: 3,153 • Replies: 18
1
Reply Fri 25 Dec, 2009 07:05 pm

In March 2005, Richards filed for divorce from Sheen.[14] The couple briefly reconciled and were seeking marriage counseling to mend their relationship. However, on January 4, 2006, Richards' representative announced that she was continuing with the divorce, and she later sought a restraining order against Sheen, citing his alleged death threats against her.[15]

On April 19, 2006, Richards filed formal legal papers asking for a divorce from Sheen under the laws of the state of California.[18] In her court filing, Richards alleged that Sheen's behavior was increasingly erratic, making their marriage impossible, and that she feared for her safety and the safety of their daughters.

Richards claimed that Sheen was physically and verbally abusive and threatened to kill her or have her killed, and that despite having accidentally shot his previous fiancée, Kelly Preston, he wanted to place firearms under their coffee table to protect them.
Richards claimed that Sheen had become paranoid and obsessive, citing his belief in 9/11 conspiracy theories, a belief that baby formula caused brain damage, a desire to purchase gas masks, and an "abnormal fascination" with Nicole Simpson's death.

Further, Richards alleged that Sheen visited prostitutes and was addicted to gambling, prescription drugs (which he bought over the Internet), and pornography.

Richards also alleged that Sheen posted a picture of his erect penis on his online profile of a "sex-search type" website and that he frequently viewed pornography featuring "very young girls," and websites "involving gay pornography also involving very young men who also did not look like adults."[19] Based on these allegations, Richards sought and received a restraining order against Sheen.[20]

There may have been trouble in Brooke Mueller and Charlie Sheen's paradise for some time now.

According to a source close to Mueller's family, the couple's marriage was on the rocks long before the alleged domestic violence incident Friday morning in Aspen, Co.

"Brooke and Charlie have had many fights during their short marriage over his insistence on staying home and never wanting to go out," the source said.

We also hear that Sheen has issues with Mueller's mother, who reportedly divides her time between homes in Palm Beach, Aspen and Los Angeles.

"She is a very big part of her daughter's life," the source said. "She is very social and Charlie hates all of the social stuff. He is cerebral and not interested in fluff."

No, but really Charlie Sheen, what’s wrong with you?

Better question: What’s wrong with us? How is Charlie Sheen the highest paid actor on TV? Do you know anybody who actually watches Two and a Half Men? The real conspiracy theory is how Charlie Sheen still has a career. The guy is a bona. fide. f"kup. Charlie Sheen is also invincible.

This will matter not to anybody. Charlie Sheen could daterape His Holiness the Dalai Lama and burn down Chateau Marmont with His Holiness in it after building out a homemade meth lab, and Hollywood wouldn’t hesitate to give him the leading role in the six-picture feature adaptation of Redwall as the lead mouse, and he’d win an Oscar for it. I don’t get it.

I got more of a kick out of the fact that it is advertised that the person saying such glowing things about Charlie is a friend of HERS. All " he just wants to stay home with the family but she is all pissed cause she wants to party"....With friends like that....

I got more of a kick out of the fact that it is advertised that the person saying such glowing things about Charlie is a friend of HERS. All " he just wants to stay home with the family but she is all pissed cause she wants to party"....With friends like that....

on the other hand maybe a lie is being perpetrated.

On Saturday, TMZ reported that Mueller recanted her accusation to the police, saying she was drunk when she called 911 at 8:34 a.m. And she was! Mueller scored a .13 BAC count (Sheen was at a respectable .04).

People also has an actual report on what happened, claiming the couple were a little tipsy at a friend’s dinner party, where they began engaging in a fight that lasted through the morning. Don't worry, though, 'cause they’ll be undergoing counseling.

In related news, nobody cares how Jon Cryer’s Christmas went. 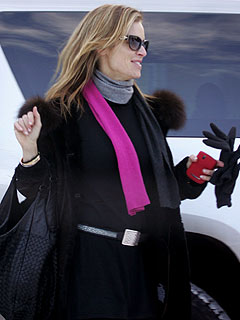 Oh, the weather outside is frightful ... but a post-holiday outing in Aspen, Co., is delightful for Brooke Mueller " even after her husband was arrested following an alleged domestic-violence incident on Christmas Day.

Prancing through the posh resort town in a chauffeured SUV, Mueller, 32, sported a sleek, mostly black outfit with a bright pink scarf, a red cellular phone " and a big grin that belied the family dispute that spoiled Christmas just days before.

Sheen, 44, who was released on $8,500 bond Friday after being booked for second-degree assault, menacing and criminal mischief, has returned to Los Angeles. He hasn't been formally charged. He's due in court Feb. 8.
" Michael Y. Park

She said that her husband, whom she identifies as Charlie Sheen, had a knife and that he threatened her.

"My husband had me with a knife. I was afraid for my life, and he threatened me," Mueller, 32, told the operator.

Sheen denied wielding a knife or strangling Mueller, according to the police report filed by the officers who responded to the call. He admitted that the couple had been arguing for several hours and that the argument had gotten very heated.

Sheen admitted having a folding knife in his travel bag, which officers said they found with the knife locked in a open position.

Mueller told the officers that Sheen attacked her when she said she wanted a divorce, holding her down on the bed by neck with one hand while the other held a knife against her throat.

The New Yorker's James Surowiecki explained why Charlie Sheen is scandal-proof while Tiger's career has been nearly destroyed by his transgressions:

Scandals that aren’t out of tune with a celebrity’s image are often surprisingly easy to bounce back from: after images of Kate Moss snorting coke surfaced, her bookings fell, but, over time, they went up. Revelations that Michael Jordan had lost hundreds of thousands of dollars gambling barely dented his appeal, since the story reinforced the image of him as a fierce competitor. But scandals that conflict with a person’s public image can wreak havoc.


Charlie Sheen's image has always been debauched"as Gawker's Foster Kamer points out, he's a known druggie, hooker enthusiast, conspiracy theorist, racist and wife beater, and yet, he continues to work consistently. It doesn't make his alleged treatment of his wife any less repulsive, but at least it explains why the outrage is low grade

I don't know about the rest of you, but I'd watch Tiger play golf again before I would ever watch anything from Sheen.

I'd rather watch the twists and turns of the Sheen marriage...this is good stuff

Actor Charlie Sheen and his wife Brooke want to reconcile, their lawyers said Wednesday, even though she told police he put a knife to her throat and threatened to kill her less than a week ago.

“They’re very much in love. They want to try to work it out and want to have the best shot at doing that,” Brooke Mueller Sheen’s attorney, Yale Galanter, told The Associated Press.

Charlie Sheen’s attorney, Richard Cummins, confirmed his client wants to reconcile. Cummins said he is asking a judge to modify a restraining order that prevents the couple from having contact.