Sabi, an explosive detection dog , was reunited with her trainer at the Australian base Afghanistan


An Australian special forces explosive detection dog has been found after going missing in action in Afghanistan 14 months ago.

Sabi, a four-year-old black Labrador, was returned to the Australian base at Tarin Kowt after she had been found by an American soldier wandering in a remote area of the southern province of Oruzgan last week.

The US soldier, named only as John, knew his Australian counterparts had lost their favourite canine companion during a gun battle involving Australian, US and Afghan special forces fighting against Taleban insurgents in southeastern Afghanistan last September. Nine Australian soldiers, including Sabi’s handler, were wounded during the engagement, and Sabi went missing.

Sabi, who was on her second tour of duty to Afghanistan, was officially declared Mission In Action. It is not known how she survived the past year, presumably eluding the Taleban, until she was discovered by the US soldier, who realised she was not a stray dog because she understood certain commands.


"I took the dog and gave it some commands it understood," John said.

She was reunited with her trainer this week who made sure the dog was Sabi with a tennis ball test.

"I nudged a tennis ball to her with my foot and she took it straight away. It's a game we used to play over and over during her training," the trainer said. "It's amazing, just incredible, to have her back."

Trooper Mark Donaldson, a VC recipient who is currently in London after a meeting with the Queen, was at the same battle where Sabi went missing.

"She's the last piece of the puzzle,'' he said. "Having Sabi back gives some closure for the handler and the rest of us that served with her in 2008 - it's a fantastic morale booster for the guys."

Yesterday Sabi was feted by US General Stanley McChrystal and the Australian Prime Minister Kevin Rudd, who met the dog during an overnight trip to visit the troops in Afghanistan.

“Sabi is back home in one piece and (is) a genuinely nice pooch as well,” Mr Rudd said, after posing for a photo with the dog.

The government is now working on returning Sabi home to Australia after a period of quarantine.

Dogs have become loyal companions to the thousands of troops stationed in war zones around the world.

In August British soldiers were saddened to leave behind Sandbag, a sandy-coloured retriever, who had been born on the base at Umm Qasr in Iraq after Downing Street turned down the request to repatriate the pet.

Last year US sergeant Gwen Beberg created headlines with her campaign to take a scruffy stray dog back to America when she returned home from Iraq. Sergeant Beberg had rescued Ratchet from burning rubbish in Baghdad.

But Sabi is the first dog known to have become lost in battle " and returned home. 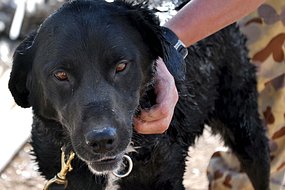 An Australian Special Forces explosives detection dog has been found alive and well almost 14 months after going missing in action (MIA) in Afghanistan.

Sabi was found by a US soldier at an isolated patrol base in north-eastern Uruzgan last week.

The black Labrador was declared MIA in September 2008 during the same battle with the Taliban in which SAS Trooper Mark Donaldson won his Victoria Cross.

Sabi was present with her handler when their combined Australian, US and Afghan National Army convoy was ambushed by an insurgent force.

Nine Australian soldiers, including Sabi's handler, were wounded during the engagement.

Sabi spent more than a year in the desolate south of Afghanistan and repeated attempts were made by the Special Operations Task Group to find her.

The US soldier who found her, and who can only be identified by his first name John, was aware Australian Special Forces soldiers were missing one of their explosive detection dogs.

He said it was immediately obvious that Sabi was no ordinary dog.

"I took the dog and gave it some commands it understood," he said.

She was flown to Tarin Kowt to be reunited with one of her trainers and he knew instantly it was Sabi.

"I nudged a tennis ball to her with my foot and she took it straight away. It's a game we used to play over and over during her training," the trainer said.

"It's amazing, just incredible, to have her back."

Currently in the United Kingdom after meeting Her Majesty the Queen, Trooper Mark Donaldson said Sabi's return closed a chapter of their shared history.

"She's the last piece of the puzzle," he said. "Having Sabi back gives some closure for the handler and the rest of us that served with her in 2008. It's a fantastic morale booster for the guys."

At the time of her disappearance Sabi was coming to the end of her second tour of duty in Afghanistan, having previously deployed to Uruzgan in 2007.

Sabi will now undergo a period of quarantine before a decision can be made about the timing of her return to Australia. 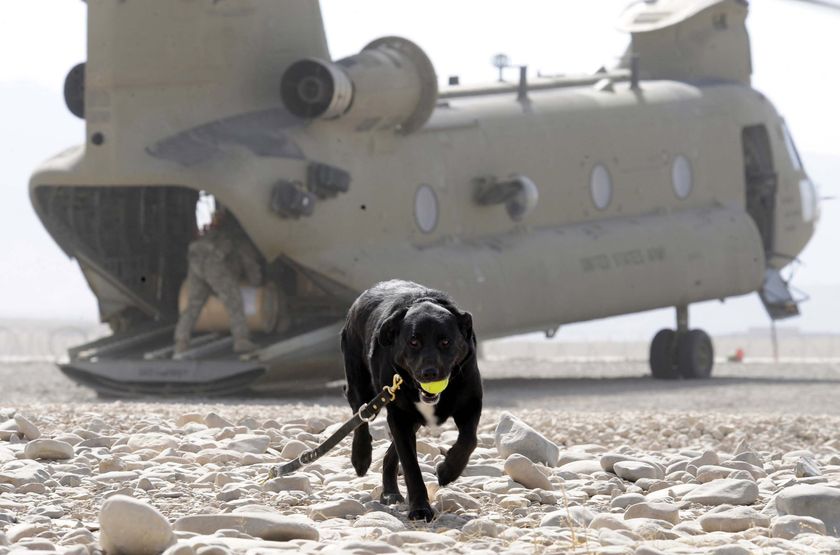