I was in high scool. Our parties consisted of beer and chips. And, except for windowpane jeans, it was a pretty anti-fashion time for fashion, post hippie, pre punk. I'm sure there were fashions for grown-ups but I tried to never deal with grown-ups during that phase of my life.

I did work in a bar at that time and recall fruity drinks being very popular - mai tais, daquaris, that sort of thing.

Shake yo' groove thang and help me help her by sharing what you remember about 1970s cocktail culture. 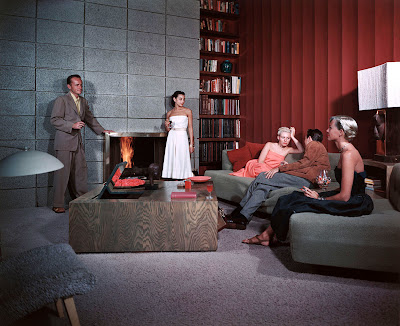 I can recall snitching smoked oysters and crackers from the prep when the hamburgers were having parties for their friends in the late 1960's and very early 1970's. mmmmm smoked oysters.

Fondue was prominently featured at other parents' parties. Hmmm, I guess we didn't live in a very cocktail-y neighbourhood.

Mulling more ... I think of cocktail culture/lounge music as being more 1960's - which someone who's turning 50 now wouldn't have any memory of at all (if memory has any relevance to the party plan)

Salt and pepper to taste

Butter one side of each slice of Wonder Bread and press each slice butter-side down into the cups of a muffin tin. In a medium bowl, mix together the ground beef, egg, onion, cream of mushroom soup, salt and pepper until well blended. Fill each bread cup with the mixture. Sprinkle shredded cheddar cheese over the tops.

I know disco was in full swing as it had been big (even in Tulsa, Oklahoma) while I was in high school. I'm sure punk was hitting the big cities but it would be a few years until I was aware of it. (I still very much love punk.)

Suits and sideburns.... could people be even more silly? Were "leisure suits" 70s or more late 60s?

When Mo was in that movie his scenes were supposed to be taking place in the late 70s/early 80s. The guy who played the dad grew this great era mustache. I remember him just dreaming of shaving the thing off because he felt so Village People.
2 Replies
1
Reply Tue 21 Jul, 2009 04:54 pm
@boomerang,
i wore a faux denim leisure suit with white piping and an open collared shirt (shirt collar over the suit collar) when i graduated grade 8 in 1976

She stares into space.

very different from the fifties meets at the Algonquin or any other three martini lunches, at least in my purview.

I wouldn't call seventies drinks cocktails. I'd call them margaritas in tall beer glasses. Two were deadly, and one was a no-driver, as in kill some time and have dinner and dance before getting in that car.

I did know a couple of people then who chugged irish whisky over a night of talk.. they were actors or directors.

Early seventies - I remember gin and tonics at parties in San Diego, but I think of that as more sixties transitional. I have vague memories of gimlets, but that was at a much older friend's house, about my age now, my age not representing this time and place. I remember having a Manhattan or two in the seventies, probably at nicey restaurants. We were more interested in wine at Trader Joes as the seventies wore on.

Mostly I'm bogged down by sixties mems of bad red wine, grass or not, depending on the company, and in either case, multiple expurgative and occasionally pretty interesting, though not always, soliloquies about life until about three in the morning, unless we were all playing the board game Risk, and then it went on until about 5 am. With certain folk there was always a theme - politics, literature (which left me thudded).. those were the main two, and that carried on through the seventies, eighties, in various ways.
0 Replies
1
Reply Tue 21 Jul, 2009 05:10 pm
I'm 54...graduated from high school in '72, spent the '70s in college.

Daiquiris were cool but expensive. We drank a lot of cheap wine (Boone's Farm usually) and beer.

I preferred to go to Senor Pico's in Century City and have their whatchallit, a fondue with queso cheese(? - was it real mexican cheese, I doubt it) and sangria and a side table with things like meatballs, etc.
0 Replies
1
Reply Tue 21 Jul, 2009 05:19 pm
I think I thought of mai tais and daiquiris as Trader Vics/The Luau hokum even back then. I might have had four daiquiris in my life. But I didn't hang out in bars in the seventies (that was the sixties, such generational differentiation).

We made daiquiris ourselves at home, involving blue curacao - beautiful, but not your every day thing, it was only that once - I remember taking a photo with the lowered sun streaming through the blue drink... that was probably late 70's.
1 Reply
1
Reply Tue 21 Jul, 2009 05:21 pm
Greenie, I've never heard of wonder bread beef canapes..

Shall I bring up the Hustle? I learned at a girlfriend party, 1974. Danced it with my later to be husband that same year. (I think, don't trust me on dates.) Also did a painting of the girl friends practicing the Hustle. And where is that? Probably still packed in my few boxes left (I hope). Or else I tossed it in a moment of stupidity when I last moved. But I still have the original photo.

2 Replies
2
Reply Tue 21 Jul, 2009 05:41 pm
@ossobuco,
Ossobuco - perhaps I should clarify that the 2 dresses (1st and 2nd from left) from Saint Laurent I owned were from his boutique, not from his couture collection, as those presumably in the picture, as well as in Vogue magazine; the last 2 dresses(3rd and 5th) I had (from Halston) were boutique as well, but then Halston only made the one collection, not two.

LOL - suddenly remembered scene from meeting the postman in the '70s in Boston (I was in graduate school there) downstairs at my apartment building and asking for the mail he had just placed in my mailbox: the man looked me over very carefully, made sure to confirm my full name, and then he said: "All this time I've been wondering what you look like - you subscribe to "The Economist", to "Guns and Ammo", and to "Vogue"!"

1 Reply
1
Reply Tue 21 Jul, 2009 05:44 pm
@ossobuco,
Adds, I bet I took it off the stretchers and kept it. I've a very fat set of wads of my oil paintings not sold. I sold a lot, just not all of them. I've tossed some, cut some up for felicitous sections, and retain some oldies. Some of my friends who had gathered reputations in art got rid of some of their dumb stuff, usually in a ritual kind of move. I'm both non reputed and a sappy sentimental person, so I'm doubting I tossed the girl friends doing the hustle completely. But I might have, as I argued with myself about that painting for a couple of decades.)
0 Replies
1
Reply Tue 21 Jul, 2009 05:44 pm
@ossobuco,
ossobuco wrote:

Shall I bring up the Hustle? ... But I still have the original photo.

reminds me of an article I really enjoyed
http://nymag.com/arts/all/process/17386/ a few years ago

Though he wasn’t born until 1977, Tony Manero, the disco-dancing, white-suit-wearing, finger-pointing-to-the-sky hero of Saturday Night Fever, exists now as a mascot for “the seventies”

We drank a lot of cheap wine (Boone's Farm usually) and beer.


I graduated in 1977. I remember driving around in a car with my best friend Bob, and for some reason, Jim Ward and some guy I can't remember were in the back seat. They were passing Boone's Farm Apple Wine back and forth, and handed me the bottle.

I remember thinking "WTF is this stuff? Apple juice?" After taking a couple of slugs I realized I was getting some of Jim's saliva in me from the neck of the bottle, so didn't want anymore. I deduced that if I didn't drink any more the saliva would get killed in the apple juice, but I didn't want the ratio of apple wine to saliva to tip in favor of Jim's spit.

Other than that, Boones Farm was an excellent chugging wine, that when well with Parliment cigarettes and Burger King.

Did that stuff even have alcohol in it?

0 Replies
1
Reply Tue 21 Jul, 2009 06:08 pm
@High Seas,
We live in different worlds, High Seas, re our bank accounts (I'm chuckling), and on a batch of issues we care about we think in different directions.

However, I do own a St. Laurent coat, no doubt not from his upper tier. It's from his rive gauche line, whatever that means, though I'll assume it means the extremist low end of his label, maybe even a line they cut out as insulting to themselves.

I've never worn it. There's not much call in my life for a purple feltish kind of swing coat..

I bought it at the Salvation Army in Santa Monica, maybe someone's mistake or maybe it had low consideration. Fun for me.
Thrift stores have gotten smarter recently.

I'm all for play with style..
On the other hand, I feel free to gripe. Never did like Halston.. reminds me of Lisa Minelli.