The Beatles, Simon and Garfunkle, and...?

Ok, now that you mention it I'll second it. I'd added it to my earlier post, as it's great music and heavy on harmony. But I can't stand most of it!


Good for kids though. Clean music about good times and heartbreak.

Cycloptichorn
0 Replies
2
Reply Fri 27 Feb, 2009 01:00 pm
This is another really wonderful record - and all the proceeds go to pediatric aids research.
And all on one album you get Ziggy Marley, John Fogerty, Sting, Bruce Springsteen, Ann and Nancy Wilson (from Heart), Pat Benatar, Little Richard, Elton John, Jackson Browne, Bob Dylan, Paul McCartney, James Taylor and more and it's fun - I treasure it as it has songs by certain people that haven't been recorded anywhere else.

The highlight is a lullabye by Meryl Streep - just beautiful.

A-By Ken Tucker
No all-star charity album has boasted a lineup more impressive than For Our Children. This 20-song compilation features original and traditional children's music by a variety of exceptional performers, including Bruce Springsteen, Paula Abdul, Meryl Streep, Bob Dylan, Sting, and Barbra Streisand. All proceeds from ''For Our Children'' will benefit the Pediatric AIDS Foundation.

The foundation was formed in 1988 by Elizabeth Glaser, Susan DeLaurentis, and Susan Zeegen. Glaser, the wife of actor Paul Michael Glaser (''Starsky and Hutch''), contracted the AIDS virus in 1981 from a blood transfusion she received during the birth of their daughter Ariel, who died of AIDS at the age of 7.

With profits going to AIDS research, education, and assistance to hospitals, ''For Our Children'' is a worthy charity item, but the album also holds up as a work of art. The crowd-pleasing cut in my house was Springsteen's performance of the John and Nancy Cassidy song ''Chicken Lips and Lizard Hips.'' The Boss strums an acoustic guitar, takes an occasional puff on a harmonica, and growls out lines about eating ''mama's soup surprise,'' which includes ingredients like ''Monkey legs and buzzard eggs/And salamander thighs.'' It's a silly gross-out song performed with headlong, Springsteenian force.

Similarly, Dylan's crack at the ''knick-knack, patty-whack'' refrain of ''This Old Man'' is both good music and a real hoot. I swear, Dylan's sly performance here is better than anything on his most recent ''grown-up'' album of new material, ''Under the Red Sky.''

A few of the cuts on ''For Our Children'' are ill-conceived, such as Elton John's flaccid funk instrumental ''The Pacifier,'' and Little Richard's overarranged and overlong version of ''Itsy Bitsy Spider.'' Consumers should also be aware that there are a few songs here that have appeared elsewhere, including Paul McCartney's ''Mary Had a Little Lamb'' (originally on his 1971 ''Wild Life'') and Bette Midler's ''Blueberry Pie'' (from 1980's ''In Harmony: A Sesame Street Record'').

But with more than an hour of music, ''For Our Children'' is a bargain with perfect little pieces such as James Taylor's charming rendition of ''Getting to Know You,'' Harry Nilsson's dreamy ''Blanket for a Sail,'' and Jackson Browne and Jennifer Warnes' reworking of the Beatles' ''Golden Slumbers''; they transform the song into a real lullaby.

Then, too, surprises abound. In ''Good Night, My Love'' Paula Abdul proves she really can sing. Heart's Ann and Nancy Wilson forsake hard rock for dulcet harmony on ''Autumn to May.'' The frequently stiff Sting offers the cheerful vulgarity of ''Cushie Butterfield'': ''She's a big lass/She's a bonny lass/And she likes her beer.'' And Meryl Streep employs a strong Judy Collins-style contralto on ''Gartan Mother's Lullaby.''

''For Our Children'' can be enjoyed on two levels: Kids can take its lovely music at face (ear?) value, while adults who appreciate the pop-cultural contexts of these performances will be beguiled.

I loved 'story songs' as a kid and I still do

And they just put out a children's album.

But their classics are really good.

Genesis, and not just the Phil Collins stuff. She might like The Lamb Lies Down on Broadway.

Freewheeling harmonies and catchy tunes? That would be the Eagles.

If Elvis Costello, then also Nick Lowe (he's married to Carleen Carter; he has country cred too), Joe Jackson and Dave Edmunds.

Early Bruce Springsteen (Greetings from Asbury Park and The Wild, The Innocent and the E Street Shuffle).

Sheryl Crow might be okay, too. Edie Brickell and the New Bohemians. Sarah MacLachlan.

Both good ideas, djjd... I know the Kinks firsthand but not They Might Be Giants (they were around when I could hear, I just never listened to 'em), they look promising. Which album would you recommend? 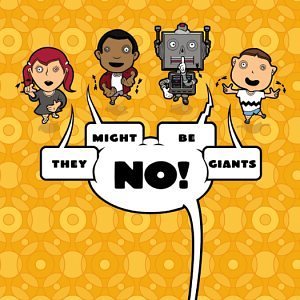 this album is directly aimed at kids, two of their songs were used in animations for the tiny toons cartoon show, "particle man" and "constantinople", they also wrote the theme song for malcolm in the middle
0 Replies
2
Reply Fri 27 Feb, 2009 01:32 pm
They Might Be Giants is fantastic, and i think would exactly fill the bill . . .

Yo ho, it's hot, the sun is not
A place where we could live
But here on Earth there'd be no life
Without the light it gives

And my personal favorite:

Everything Right Is Wrong Again
Don't Let's Start
Nothing's Gonna Change My Clothes
Where Your Eyes Don't Go
Piece of Dirt
Mr. Me
Birdhouse in Your Soul
Istanbul (Not Constantinople)
The Edison Museum
Boss of Me (Malcolm In The Middle)
Experimental Film
Particle Man
Why Does the Sun Shine (The Sun Is a Mass of Incandescent Gas) (live)


for the "NO" album see if you can get an actual cd, there's some pretty cool visual content on the disc

I loved 'story songs' as a kid and I still do

Answer: "Well, they're synchronized, their songs are just so catchy... I don't quite know!"

Will find various other songs mentioned here and post highlights instead of going post by post....
1 Reply
1
Reply Fri 27 Feb, 2009 03:06 pm
@sozobe,
A larger survey is gonna have to wait I guess... she's still stuck on "Particle Man."

"Just ONE more time..." She's singing along with it now.

This one is precious