Bright Green Body in Evening Sky: What is it?

Forums: Astronomy, Night Sky, Asronomy, Comet, Bright Star
Email this Topic • Print this Page
1
Reply Thu 19 Feb, 2009 04:31 pm
@Thomas,
Not if you read the longer explanation, Thomas - diffraction phenomena can and do last for a couple of hours. It's in my second post.

I've seen it lasting longer than 2 hours when I was in the Arctic circle - the sun's refracted image just hung there, it was a weird feeling.
1 Reply
1
Reply Thu 19 Feb, 2009 04:34 pm
If you see it again, try to determine if it "flickers." Stars "flicker," but planets and comets do not. The comets and planets are reflecting the light of the sun, stars are giving off their own light. This is why stars are said to twinkle. Just a thought--you can tell you're looking at Venus because of the steady light it gives off (reflects, actually).
1 Reply
3
Reply Thu 19 Feb, 2009 04:36 pm
@High Seas,
Quote:

I've seen it lasting longer than 2 hours when I was in the Arctic circle - the sun's refracted image just hung there, it was a weird feeling.

What time of year was that? In summer in the northern hemisphere, at or above the Arctic circle, the sun appears to just dip below the horizon and "pop up" again. Even as far south as Ireland, in summer, the sun seems to just dip below the horizon. One midsummer's night, there's less than four hours of darkness, and the darkness is luminous, because the sun is (only apparently) just below the horizon.
1 Reply
-2
Reply Thu 19 Feb, 2009 04:39 pm
@Setanta,
Stars don't flicker if observed outside our atmosphere - the flicker is attributable to atmospheric turbulence. Same as the green mirage Little K saw - it's a diffraction effect combined with an atmospheric mirage at sunset.
0 Replies
2
Reply Thu 19 Feb, 2009 04:40 pm
I rather suspect that Lil Kay was not outside the atmosphere at the time . . . although, of course, i don't know what she was smokin' . . .
0 Replies
1
Reply Thu 19 Feb, 2009 04:41 pm
@Setanta,
It was in Northern Finland, summer, but the point is the sun had actually dipped under the horizon, just this green afterimage of the sun hung there - look at links on first page, they would account for what Little K saw.
0 Replies
1
Reply Thu 19 Feb, 2009 05:56 pm
HighSeas, I find it amusing that you are so certain of what I saw. I read the accounts (and have seen an actually green flash in the past) and it is othing like what I saw this week.

Set - It was not twinkling at all.

HighSeas, I find it amusing that you are so certain of what I saw. I read the accounts (and have seen an actually green flash in the past) and it is othing like what I saw this week.........


I went by your original description; if it was misleading, you of course should know all about it. So, now there is a new, corrected version of what you saw? I'm curious to read it at your earliest convenience.
0 Replies
0
Reply Sat 21 Feb, 2009 09:13 am
The Swift View of Comet Lulin
Credit: NASA, Swift, Univ. Leicester, DSS (STScI/AURUA),
Dennis Bodewits (NASA/GSFC), et al.

Explanation: Now growing brighter, Comet Lulin is headed for its closest approach to planet Earth early next week. But the comet's greenish glow, familiar to earthbound skygazers, is replaced by false colors in this premier view from the orbiting Swift satellite. Image data from the Swift detectors, normally intended to follow cosmic gamma-ray bursts, were recorded on January 28. The data are combined here, along with a sky survey image of background stars, to show optical and ultraviolet light in green-blue hues and x-rays from the comet in red. The result maps remarkable x-ray emission on the comet's sunward side as incoming solar wind ions interact with gases in the swollen coma. It also shows substantial ultraviolet emission opposite the Sun, in the direction of motion and the comet's tail. The ultraviolet emission is from the OH molecule derived from the breakup of water, an indicator of the copius amounts of water produced by this extremely active comet. In fact, astronomers estimate Lulin was releasing about 800 gallons of water each second, enough to fill an Olympic-size swimming pool in less than 15 minutes.

It's semi-common knowledge that stars twinkle and planets don't. By semi-common, I mean that a lot of folks know that, but I also mean it isn't strictly true.

Stars twinkle because we see them from the bottom of a sea of air. Little cells of air, which are about ten centimeters across and located many kilometers high, move across our vision as we watch the sky. These small bundles of air act like little lenses, bending light as it passes through them. This bending, called refraction, is familiar to anyone who drives on a hot day: hot air just above the road surface bends light more than the cooler air slightly above it. That's why you can sometimes see that shimmery veil of what looks like water on the road; it's really the air bending the light above it. Sometimes you can even see cars reflected in the road!

Anyway, these parcels of air up high in the atmosphere travel to and fro, bending the light from a star in more or less random directions. Stars are big, but they are so far away that they appear to be very small, much smaller to our eyes than each of these air bundles. So when the light gets bent, the apparent movement of the star is larger than the size of the star in the sky, and we see the star shifting around. Our eye can't really detect that motion, because it's too small. What we see is the light from the star flickering. That's why stars twinkle!

So why don't planets twinkle? It's because planets are bigger. Well, really, they're smaller than stars, but they are so much closer they appear bigger to us. They are much bigger in apparent size than the air bundles, so the smearing out of their light is much less relative to the size of the planet itself. Since the image doesn't jump around, they don't appear to twinkle.

There's always an exception though. In very turbulent air, even planets can appear to twinkle. The air is moving so rapidly and so randomly that even something as large as a planet can twinkle.

This effect also plays with a star's color. Blue and green light get bent more than orange and red, so sometimes in very turbulent seeing a star's colors will rapidly change. This usually happens when the star is low on the horizon (so there's more air for it to pass through). The brighter the star, the easier it is to see; Sirius, the brightest nighttime star, is often seen changing from green to red to orange and back, very rapidly. I've seen it myself and it's quite lovely. If you're not prepared for it it's quite surprising; many people report a UFO when they see it! If they're driving, the star appears to follow them too, just like any distant object appears to follow you while you're driving (it's due to parallax). So if a friend says they saw a bright UFO, low to the ground, rapidly changing color and following them gently point out that most likely it wasn't a spaceship, but it was almost certainly extraterrestrial!

Based on this explanation it seems possible that Venus could also have appeared green (or other colors as well) due to greater than normal turbulence in the atmosphere.

In addition, venus is currently going through a waxing crescent phase. Even though it is extremely bright (18 times brighter than Sirius), it is actually only a thin crescent (all depends on the date in question), that appears to be a solid point of light only because or relative brightness compared to size. The smaller the apparent size, the more likely it is to behave like a star with respect to diffraction.

A combination of turbulent atmosphere along with the thin crescent may have made Venus appear green. This might also have been a very localized phenomenon which means that only people driving along that particular stretch of highway at that particular time would have seen the green color. 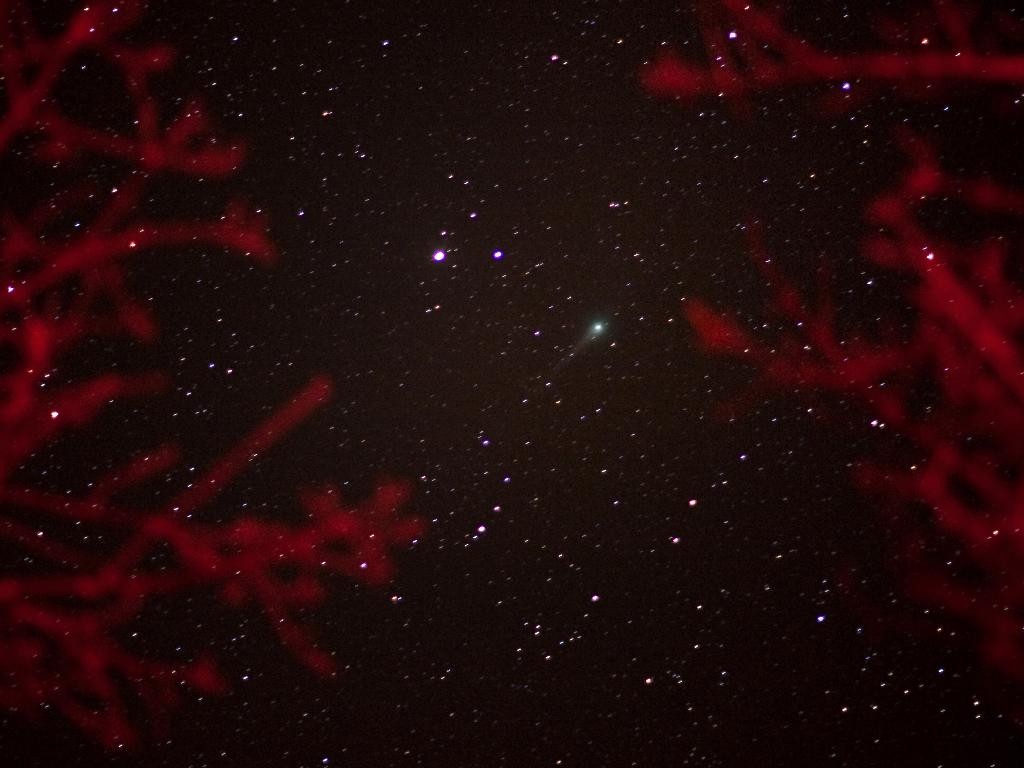 The comet Lulin (center-right) is seen through the trees from Shenandoah National Park in Virginia, Monday, Feb. 23, 2009. Lulin, also known as the green comet, made its closest approach to the Earth overnight.
1 Reply
0
Reply Thu 26 Feb, 2009 09:51 am
@old europe,
Great picture, Old Europe, but that comet cannot be what Lil K saw shortly after sundown in the western skies over Massachusetts. Comet Lulin until late February will only be visible in the Northern hemisphere after midnight, with a telescope, says NASA:

How bright will Comet Lulin become? No one knows for sure. Although it is notoriously difficult to accurately predict the brightness of newly discovered comets, Comet Lulin could well become visible to the unaided eye later this month. As Comet Lulin moves into the northern sky in mid February to rise around midnight, it should at least be spotted by comet watchers with binoculars and a good sky chart.

Of course, considering Li'l K's subsequent doubts that her original description was accurate, it might be advisable to ask if anyone else driving back from the Cape that day (tens of thousands of cars) actually observed the same phenomenon before doing any additional sleuthing....
1 Reply
2
Reply Thu 26 Feb, 2009 01:06 pm
@High Seas,
High Seas wrote:

Of course, considering Li'l K's subsequent doubts that her original description was accurate, . . . .

Perhaps your time zone will differ from mine, but this is only a 2-page thread!

I'm particularly interested in phenomena such as described here, as there's been considerable variation in the earth's magnetic field lately. Not to imply there's any connection of that with any of the posts here - I'm just curious what, if anything, was actually seen over Massachusetts as I can't find any description of it other than on this thread. Does that answer your question?
0 Replies
2
Reply Fri 27 Feb, 2009 02:10 pm
@High Seas,
No, but party on.
1 Reply