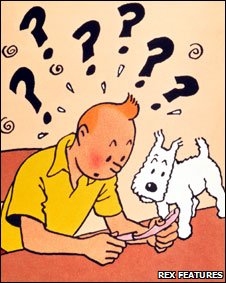 Tintin and Snowy: the intrepid duo

Tintin turns 80 at the weekend as Steven Spielberg begins work on a Hollywood film of the comic book hero. He has long been a star on the Continent, but the cub reporter is almost unheard of in the United States and little more than a cult in the UK, writes Laurence Grove. When, on 10 January 1929, Tintin first appeared in the children's supplement of Brussels' right-wing newspaper Vingtieme Siecle, the serialised adventure that was to follow could, at the time, have had all the makings of a transatlantic hit.

Tintin au Pays des Soviets was to portray a cruel and corrupt communist regime, where factories were cardboard cut-outs and those who spoke out against the Party were dispensed with immediately.

Unfortunately the boy scout may have ruined his chances of becoming an all-American role model in his subsequent adventures by belittling the natives in Tintin au Congo (1930) and then unveiling Mafia strangleholds and cruelty to native Americans in Tintin en Amérique (1932). Nonetheless, Europeans have largely forgiven him his flirts with Nazi sympathies (L'Étoile Mystérieuse, 1942).

So how come, as Tintin approaches 80, like Johnny Halliday, but unlike Jacques Brel, he's a famous Belgian who has not yet managed to woo the US?

There is no doubting that Tintin is a Euro-hit: he has featured on stamps, phonecards and a range of products from underpants to edibles, and is to be the main subject of a new museum opening in Belgium this year. Although Herge, his creator (real name Georges Remi, 1907-1983), expressly forbade the series to continue after his death, related publications are a Rackham-like treasure trove for Moulinsart, the organisation known for its draconian enforcement of Herge's copyright estate. 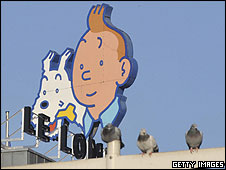 RANDOM TINTIN FACTS
*Despite being a journalist, Tintin is only ever seen once with a completed article
*The now defunct chain of UK bookstores, Ottakars, was named after the Tintin book King Ottokar's Sceptre
*The Thom(p)son twins weren't twins, despite looking almost identical

By comparison, recent albums of Tintin's comic-strip colleague Asterix, a relative whippersnapper at 50 this year, have, in France, outsold Harry Potter and the Da Vinci Code put together.

Even in the British Isles, Tintin's following tends to be cult rather than mass devotion. Although for many, it was the bequiffed boy's trip to Britain that sealed his longevity.

The 1938 album L'Ile Noire (The Black Island), which takes its inspiration from The Thirty-Nine Steps, is, for many Tintin's coming of age. It is this album that refines his trademark thrill-a-minute adventure format, and saw Herge perfect his clear-line style, which proved a major influence upon Andy Warhol and the pop artists. Arguably L'Ile Noire is to Herge what Macbeth is to Shakespeare.

Yet while Tintin embraced Britain, the English-speaking world never returned the compliment

Maybe he just came on to the scene too late.

The formula of a serial newspaper strip that each week had a cliffhanger ending was one that the US Sunday supplements had successfully exploited from the turn of the last century onwards. Herge in effect was doing little more than providing a Euro version of a US phenomenon.

More recently, Tintin can be seen as quite simply the Hollywood James Bond, but without the girls: he travels to exotic locations, mixing humour and gadgets as he battles the generic international baddie du jour.

Bond, like Indiana Jones, is a superhero without specific superpowers. And it is the idea of a Superman, or indeed a Wonderwoman, that has typically drawn North Americans to comics. In Britain a more self-effacing outlook has underlined the comic in comic, with heroes from the Beano or Topper traditionally making us laugh.

The "bandes dessinees" that are the French-speaking world's equivalent have, however, been more ambiguous; a graphic creation - in France comic strips are known as the Ninth Art - on a par with New Wave cinema.

Ironically, when it comes to Tintin the person, it is perhaps his very internationality that is his undoing. Euro-characters who do well in the States - James Bond, but also those portrayed by Hugh Grant and Gerard Depardieu - often play on national stereotypes and foible-laden sophistication. Herge, however, went out of his way to deny Tintin any specific Belgicite, underlining rather his international features.

Hercule Poirot he is not. He lives in a French chateau, has no Belgian linguistic tics, and could not be imagined tucking into mussels, chips and fine chocolates. His friends and acquaintances evoke different aspects of Euroness, from the Thompson twins' bowler-hatted Englishness, Bianca Castafiore's hot-headed Italian traits, or Professor Calculus's Germanic scientific-ness.

Even the names must have seemed entirely alien to an American audience.

Indeed Tintin's sophistication is of a very different kind: Le Bijoux de la Castafiore (1963), an album in which nothing happens, plays with notions of degre zero writing. Tintin au Tibet (1960) considers the evolving status of the post-colonial Other. And the posthumous Tintin et l'Alph-Art (1986), a book about artistic creation, is essentially a work of meta-fiction. 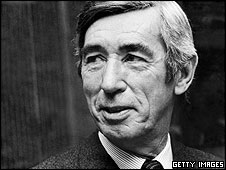 It is easy to see how, from afar, Herge, let alone Cuthbert Calculus, can be seen as indulging in traditional French-style philosophical beard-stroking.

Such intricacies may have worked against Tintin, with Steven Spielberg having had his planned movie on ice for years since he bought the movie rights in 1983.

The project's shortcoming was apparently US puzzlement at Tintin. One rumour suggested there were problems with an adventure hero whose only love interest appeared to be a fox terrier, to the extent that at one stage making Tintin into a girl was not out of the question.

The situation may however be changing, as filming is finally to start on a Tintin movie, to be produced by Spielberg and Peter Jackson, apparently a mixture of animation and "real-life" with extended 3-D effects.

Tintin certainly has evolved since the days of his politically incorrect misadventures, and so too has America. Perhaps in the brave new world of Barack Obama there will be more room for this white European octogenarian.
Type: Discussion • Score: 1 • Views: 5,772 • Replies: 3
No top replies
1
Reply Fri 9 Jan, 2009 05:30 pm
Ohhhhh...I love love love love Tintin! I grew up on those comics (and Asterix & Obelix). Have read, no - devoured, each and every single comic. In fact, just recently discovered some in my local library and promptly borrowed them all!!
0 Replies
1
Reply Fri 9 Jan, 2009 05:54 pm
here's a couple of interesting takes on Tintin, one a reworking of the character, another a literary criticism

Tintin In The New World: A Romance
Acclaimed author Frederic Tuten boldly revives the well-loved character Tintin - the eternally youthful protagonist from Belgian artist Herge''s popular comic book series, The Adventures of Tintin - and leads him into an adventure like none he has experienced before. Once again joined by Captain Haddock and his little dog Snowy, the intrepid world traveler Tintin embarks on a mysterious journey to Machu Picchu in Peru. But where danger and intrigue have met him before, this voyage brings new perils and enchantments.

Tintin And The Secret Of Literature
Appearing on the eve of Herge’s centenary and the release of a major Steven Spielberg Tintin film, Tintin and the Secret of Literature will be avidly devoured by Tintin lovers and anyone with an interest in literature, philosophy or art.

McCarthy asks: is Tintin literature? Taking a cue from Tintin himself, who tracks down illicit radio signals, enters crypts and decodes puzzles, he shows how Herge’s themes--expulsion, violation of the sacred, the host-guest relationship, and questions of forgery and fakeness--have fuelled and troubled writers from the classical era to the present day. McCarthy’s investigation is a fascinating look into the nature of literature and art .

0 Replies
1
Reply Fri 9 Jan, 2009 08:26 pm
I have been aware of this character for many years, but have not been compelled to check him out. Just looks to lack character or smarts or something.
0 Replies