Propaganda war: trusting what we see?

Israel has tried to take the initiative in the propaganda war over Gaza but, in one important instance, its version has been seriously challenged.

The incident raises the question of how to interpret video taken from the air.

Israel released video of an air attack on 28 December, which appeared to show rockets being loaded onto a lorry. The truck and those close to it were then destroyed by a missile.

This was clear evidence, the Israelis said, of how accurate their strikes were and how well justified. A special unit it has set up to coordinate its informational plan put the video onto YouTube as part of its effort to use modern means of communications to get Israel's case across.

The YouTube video has a large caption on it saying "Grad missiles being loaded onto the Hamas vehicle." As of Saturday morning UK time, more than 260,000 people had watched it.

It turned out, however, that a 55-year-old Gaza resident named Ahmed Sanur, or Samur, claimed that the truck was his and that he and members of his family and his workers were moving oxygen cylinders from his workshop. 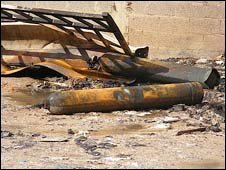 This workshop had been damaged when a building next door was bombed by the Israelis and he was afraid of looters, he said.

The Israeli human rights group B'Tselem put Mr Sanur's account on its website, together with a photograph of burned out oxygen cylinders.

Mr Sanur said that eight people, one of them his son, had been killed. He subsequently told the Israeli newspaper Haaretz: "These were not Hamas, they were our children... They were not Grad missiles.".

The Israeli response was that the "materiel" was being taken from a site that had stored weapons. The video remains on You Tube.

But the incident shows how an apparently definitive piece of video can turn into something much more doubtful.