Forums: Chanukah, Holidays, Judaism, Hanukkah, Jewish Holidays
Email this Topic • Print this Page
Reply Sun 21 Dec, 2008 09:28 am
To all of our Jewish friends here.Wishing you love, peace and prosperity.

I would love to hear how you will be celebrating.
Type: Discussion • Score: 8 • Views: 4,584 • Replies: 22
1
Reply Sun 21 Dec, 2008 10:21 am
@squinney,
we celebrate em all. My family is so fucked up genetically that our one side are Jews who "converted" under duress through the Czar, Weve got RC's and then theres the Orthodox Christian contingent. Our holidays go on from Hannukah through Epiphany and its probably why Im always depressed at this time of year (too many other Happy people make me ill).

I do like the lattke meals and we have one window in which we do a menorah . We only do gift giving at Chritmas WEve and one small set of jewelry **** at Ep[iphany. EVerybodys got enuff watches and bling (and most of us dont think much of blinganyway) so weve been doing gifting of others for about 5 years on Epiphany
1 Reply
1
Reply Sun 21 Dec, 2008 10:37 am
@farmerman,
HAPPY HANUKKAH TO ALL !

how about smoked salmon lattkes ?

1 Reply
1
Reply Sun 21 Dec, 2008 11:05 am
Create an Easy First Hanukkah Away from Home Dinner
Whether you're in a small apartment or a dorm, as long as you’ve got a kitchen (or access to one) you can still create a Hanukkah dinner away from home. We've provided tips and hints for all of the tastiest holiday dishes, so invite friends and turn it into a potluck celebration.

I'd love 'em even if they never invited me to a seder.

Last year I looked high and low for menorah candles and couldn't find any in time -- used birthday candles instead. Worked OKish. After Hanukkah was over, I found a pack on sale at Pier One and bought 'em so we're all set this year. (Found them in the basement and put them next to the menorah a couple of weeks ago.) We'll make at least latkes, maybe some of that other stuff too.

Nice to know someone else who does a big mishmash celebration, farmerman. We don't do epiphany though. (My dad is Jewish but agnostic -- that is, his parents were both Jewish and religious and my grandma did what she could to educate me but my dad didn't really do anything Jewish when I was growing up, including Hanukkah. My mom is Methodist but agnostic, same thing, but we did Christmas. We now do both Hanukkah and Christmas -- sozlet knows more about Hanukkah than I ever did.)

Happy Hanukkah to all!

And happy solstice too! 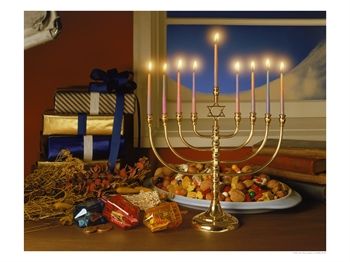 Since there is snow, snow and more snow we'll light candles at home. No fried stuff for me this year and no Chanukah gelt (chocolate). But I am making my chicken soup with matzoh balls this week and then later on we'll have a nice whole chicken with taters, yams, some sort of green vegetable and salad. RP and I both have a lot of time off, starting on 12/24 so there will be togetherness.

A resident in the neighborhood for which I work started the mixed blessings cards. There's a large market for them and she does well. Most of the families celebrating at the Clubhouse this afternoon are mixed families teaching their children both traditions. I'm lucky enough to be learning, too.

When I went to get hanukkah decorations for the Clubhouse last year the only place I could find any was at Bed Bath and Beyond. Even that was fairly minimal for what I needed since it needed to be upscale. I was fortunate to find a silver plated mennorah and blue candles. Wish it was larger, but it was all they had. We use an electric for the lighting since we can't leave candles lit. Found a really cute dreidle candy box and a glass tray with dreidle feet.

Gelt!! The only kind I could find was made in China. No way I'm buying chocolates from China.

0 Replies
2
Reply Sun 21 Dec, 2008 05:20 pm
As a child it was a comparatively small holiday, I believe, that sort of was around the time of Christmas. The "Ch" guttural sound (Chanukkah) was the way it was pronounced as a child. Today it seems to have lost its ethnicity, and is pronounced "H"annukah. And, the number of different spellings are confusing. "Channukah gelt" (German/Yiddish for money) was just a silver dollar from a relative. No big holiday, as I remember it. Yes, there was the food, but some of that food could have been made anytime one got an urge to eat ethnic.

Anyway, the holiday, I believe, became a bigger holiday, with toys, etc., for children, when Jewish children complained to parents that Christian kids at school, or wherever, where getting really nice gifts for Christmas. So, the holiday started including gifts, thanks to Santa Claus, I believe. There might be adults that give Chanukkah presents to other adults. Not in my time though. That might be a more recent innovation?

Once children are grown, and out of the house, the holiday can become sort of a memory for a percentage of secular Jews.

The "menorah," commemorating the eight days of some temple's oil lamp continuing to burn for eight days (with supposedly only a day's worth of oil), is often not too far, or right next to, a Christmas tree in the lobbies of many a NYC office building or apartment building.

I think Chanukkah has become part of the holiday season awareness by many urban Christians. Not that they celebrate it, but they are quite aware that it is what Jewish kids get presents for. And, in urban U.S. cities, or the nearby suburbs, there are quite a few families with a Jewish person marrying in, so many people say Happy Holidays, and reserve the Merry Christmas for those they know well enough to be sure it is completely appropriate.

As Sam Levenson the comic from decades past said, "Only in America!"

Gelt!! The only kind I could find was made in China. No way I'm buying chocolates from China.

chocolate "gelt" still is very popular in germany - and seems to have a good export market .
even in our small city in eastern ontario several stores carry the chocolate gelt made by german chocolatiers - we do have a rather diversified population because of our university .
can't you find it at a deli ?
it now comes as EURO coins !
hbg

C'mon even if you aren't.
1 Reply
1
Reply Thu 29 Sep, 2011 07:31 pm
@jespah,
Hi Jespah. I was born Jewish but haven’t practiced the faith in over five years now. My parents brought me up to believe but lately I’ve been a non-practicing Jew or a Jew who no longer believes. Is that a horrible thing? I think my parents would think so.