A new Emperor's Palace for Berlin

ov. 28 (Bloomberg) -- The Italian architect Francesco Stella won a competition to rebuild Berlin’s palace, once home to Prussia’s rulers and the Kaiser, 60 years after it was blown to pieces by the East German authorities.

A jury of architects and government officials decided on Stella’s project after two days of meetings which Vittorio Lampugnani, the president of the jury, said included “some wrangling.” Stella’s concept meets parliament’s demands that three of the four facades should be reconstructed, yet includes a glass-covered courtyard behind the main entrance. It also falls within the budget of 552 million euros ($702 million).

“The challenge was to combine a modern, future-oriented contemporary use with the German parliament’s specifications on the reconstruction of the baroque fa ade,” German Construction Minister Wolfgang Tiefensee told reporters in Berlin today. “The design we’ve chosen solves this challenge convincingly.”

The German parliament last year agreed to provide 440 million euros of government funding toward the reconstruction. The state of Berlin is supplying 32 million euros and the remaining 80 million euros is to come from public donations.

Parliament’s decision to rebuild the baroque facade met opposition, including from architects on the jury. Lampugnani said today that he “would have been happier with freer criteria.” The British architect David Chipperfield, also on the jury, said he would have preferred “a modern building in old proportions.” In an interview with the Spiegel magazine in December last year, he warned that “simple copies can quickly become lifeless.”

Stella’s concept includes an underground boulevard that will connect the banks of the Spree River to the main hall of the palace. It also creates “generous open air steps and a promenade for the public” along the Spree, according to the architects.

To make space for reconstruction of the palace inhabited by the Prussian rulers and by Kaiser Wilhelm II of Germany until his abdication in 1918, authorities are dismantling the last remnants of the Communist-era bronze-glass, steel and concrete Palast der Republik, once home to East Germany’s powerless parliament.

Reconstruction of the Schloss is slated to start in 2010 and reach completion in 2013 or 2014. The new building, to be known as the “Humboldt Forum,” will house some of Berlin’s antiquities and art, parts of the Humboldt University and the city library as well as shops and restaurants. Model of Stella's Humboldt Forum (Photo: dpa via Spiegel-online)
Type: Discussion • Score: 1 • Views: 8,436 • Replies: 16
No top replies
1
Reply Fri 28 Nov, 2008 12:34 pm
@Walter Hinteler,
Walter - do you think ol' Fritz would have liked it? He couldn't stand the predecessor building and stayed as long as he could at Sans Souci. I actually attended the ceremony of re-burying his coffin; it was very touching.

I was working in Berlin at the time and managed to get an invitation - with great efforts!
1 Reply
1
Reply Fri 28 Nov, 2008 12:48 pm
@High Seas,
Well, I have my problems with old building re-built in the old way - but of course the GDR's "Palace of the Republic" (which was built on the old palace's place) had to be turned down, due to asbestos.

We've been with some fewllow A2K'ers in Berlin, this August - the last remaining parts of the Palce of the Republic are to be seen on the left (the other building is the 'Berlin Cathedral') Did you attend the re-burying of his 11 dogs as well, High Seas? (They are in the other tombs) At last now you finally see why he's called "the Great"!


Hmm, eleven dogs buried beside him - and no Mrs Fritz

(But every day a fresh potatoe on his tombstone.)
1 Reply
1
Reply Fri 28 Nov, 2008 01:21 pm
@Walter Hinteler,
Considering this lady's activities in all the wars, no wonder Fritz only had something kind to say about her after he was sure she was dead:

and one onto the cover of this book : 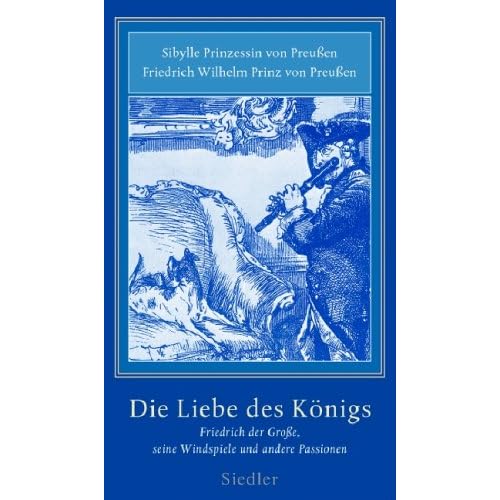 From people's palace back to Prussian palace

Yesterday an Italian architectural firm, Francesco Stella, beat 39 other architects to win the contract to replace it with a re-creation of the 18th century Prussian palace, which was destroyed by second world war bombing. Communist authorities swept away all traces of the baroque building in the 1950s, replacing it with their own version of a people's palace - a glass-fronted eyesore that served as a parliament headquarters and a recreation centre.

In 1990, after the fall of the Berlin wall, the building was deemed unsafe and was closed. Almost 80,000 tonnes of asbestos were removed before it was painstakingly dismantled over three years. A phto-simulation in today's Tagesspiegel (Tgesspiegel, 29.11.08, page 9), with the mueum island in foreground and the new, planned Humboldt-Forum in the back.
0 Replies
1
Reply Sat 29 Nov, 2008 02:34 am
Another Berlin paper, the Berliner Morgenpost, doesn't seem to like the winning design: they published a couple of those models, which didn't win the competition: As to your comment on rebuilding copies of old buildings - at the time I visited Goethehaus in Frankfurt I didn't know it was a complete replica of the original. I only found out when I climbed the top level of the house's staircase, tried to push the trapdoor to the roof, and found out it was only a painted imitation, not a real trapdoor at all!

As to your comment on rebuilding copies of old buildings - at the time I visited Goethehaus in Frankfurt I didn't know it was a complete replica of the original. I only found out when I climbed the top level of the house's staircase, tried to push the trapdoor to the roof, and found out it was only a painted imitation, not a real trapdoor at all!


The Goethe house in Frankfurt - like nearly all other buildings there [and in many other German towns/cities] - was rebuilt after WWII, true to original.

My comment was more directed to what the do now in Berlin - same was done with the castle in Brunswick a few years ago: View from about 1897 - this (second) town castle was nearly completely destroyed in WWII, the remains taken away in 1960, and that place then become a park. (I remember how it looked alike before 1960.9

Today, it's an office building, with shops and restaurants ... I do have an obligation to the late Mrs Kohl, who invited me to the ceremony at Sans Souci, to say that it was a stunningly beautiful day, bright blue skies, and - she noticed, I didn't - such an embarassing time for the Prussian Guard: all of them were crying (as were practically all the guests) but they, unlike us, couldn't reach for their handkerchiefs, having to stand at attention as they did, so the tops of their uniforms in the front were quite a darker (wet!) color by the time the ceremony came to an end. But, definitely, doggies were not involved at the time.

At a more general level, and thinking of my late relatives who died at points many miles east of Potsdam, I wondered about the utter sense of defeat that must have overwhelmed what last few defenders decided to dig up Ol' Fritz and carry his coffin westwards. To his eternal credit, General Patton, a great student of history, met them and ensured the security of the coffin and remains, of the bearers, and, ultimately, of the land itself. All those who attended the ceremony at Sans Souci heard this said by the Bundeskanzler, and while I'm sure his remarks were carried on TV I wanted to repeat them here in case you missed them. But.... no dogs were mentioned, I don't know why

0 Replies
1
Reply Thu 22 Jan, 2009 10:39 am
According to spiegel-onime, Volkswagen confirmed the information given by the Federal Government that parts of the new Golf VI engine are made out the steel from the old 'Palace of the Republic" New Emperor's Palace, Walter? Who gets to be Emperor?
0 Replies