The orb-weaving spiders were transported to the station aboard NASA's shuttle Endeavour earlier this week, but initially wove an aimless concoction in their lab enclosure during their first days in weightlessness. But now they've taken another stab at weightless web construction.

"We noticed the spiders' made a symmetrical web," the space station's current skipper Michael Fincke radioed to Mission Control today. "It looks beautiful."

Fincke said he was amazed at how fast the two eight-legged creatures appear to have adapted to living in space. Re: NickFun (Post 3483252)
Astronauts have long complained about the difficulty of even simple tasks in microgravity. 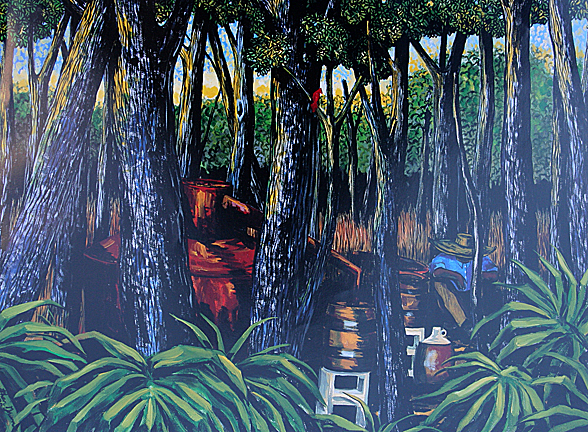 like an evian with a hit! and an attached gripe.
0 Replies
1
Reply Sat 22 Nov, 2008 08:10 am
@edgarblythe,
The instinct for how to build a web must be only loosely coupled with orientation. For a spider, this might be like adapting to very windy conditions on Earth.

Many spiders are buoyant in our atmosphere when they are first born and use "ballooning" to get around. Once they land they are still tiny creatures so even a small updraft where they might choose to build a web might seem similar to weightlessness to them.

Maybe it shouldn't be surprising that spiders can adapt to building webs in space.

But it's still pretty amazing. Thanks for the article Edgar.

Many spiders are buoyant in our atmosphere when they are first born and use "ballooning" to get around. Once they land they are still tiny creatures so even a small updraft where they might choose to build a web might seem similar to weightlessness to them.

I have read that spiders are usually the first life forms to colonize new land which raises above the ocean for precisely that reason.

Yes. Some baby spiders are truly minute and only a tiny wisp of thread can carry them for thousands of miles. During high altitude research studies where they sift the upper atmosphere to see what's up there, baby spiders have been found completely frozen, only to become active again when they return to Earth and thaw out. I think I read that they could remain frozen in the upper atmosphere for years and still survive.

MOSCOW"Orbiting the earth aboard the International Space Station, Expedition 9 scientists were chagrined to report a bevy of equipment and supply problems stemming from the behavior of an inquisitive raccoon Monday.

The pesky raccoon that has turned the ISS upside down.

"Yesterday, we found fruit rinds in the EVA suits and helmets, and the day before, it was garbage strewn all over the Pirs Docking Module," ISS Science Officer Mike Fincke said via a video-link to Russian mission control. "Today, a controller on the starboard truss failed because the power cord was chewed clean through. The little guy's curious, that's for sure."

Both Fincke and Expedition 9 Commander Gennady I. Padalka of Russia reported surprise run-ins with the raccoon. Padalka said he was startled to find the stowaway nesting in the centrifuge accomodation module and Fincke said that the mischievous animal scurried underfoot as he was replacing a failed remote power controller module on a recent spacewalk and knocked him into a weightless spin.

Fincke said he traced the recent contamination of the ISS water supply back to the raccoon's habit of washing its food before eating it. The American officer added that the space station's external-refuse cylinders are regularly turned over and rummaged through"especially on nights when the crewmembers have consumed fish dinners or freeze-dried "astronaut ice cream."

Neither of the two scientists has been able to outsmart the wily animal, despite weeks of effort.

"Although the ISS is mankind's best-planned space station, it regrettably has no plans for dealing with pesky wildlife," said Padalka, who has been appointed temporary pest-control officer for the ISS. "We've put out Havahart traps, but the little bandit somehow always makes off with the bait. Evidently, due to zero gravity, the raccoon does not weigh enough to depress the trigger-plate."

While capturing the animal remains a top priority, Expedition 9 crewmembers are determined not to harm the sneaky little guy.

"Heck, if we announced we were going to exterminate him, mission control would go berserk," Fincke said. "They can't get enough of his antics."

"He is devious, this one," Padalka said, chuckling.

According to Padalka, the little critter's mischief does provide the crew with much-needed entertainment.

When Padalka opened his locker last week and found an orbiting thundercloud of rumpled wrappers in place of his private supply of Snickers bars, Fincke laughed so hard he spit out the pouch of water he'd been drinking. However, Fincke was not the one laughing when he spotted the playful creature running off wearing his spare Orlan-M spacesuit helmet. But both astronauts could enjoy seeing the bewildered raccoon scrambling to keep up with the zero-gravity treadmill, after having apparently triggered its "quick-start" switch.

"You have to give it to the little guy, he's persistent," said Fincke, who, while calibrating the ISS telescope last week, had a rare opportunity to view the raccoon up close, when its masked, bewhiskered face stared back at him through the telescope's other end.

Fincke reported another recent run-in with the confounded varmint.

"I shooed him out of the Unity module, but then Padalka got me on the intercom, and the critter, seeing I was distracted, slipped in behind me and got his deft, furry little paws on the controls for the gyroscopes that stabilize the platform's flight. Before we knew it, the danger lights were strobing, the alarms were going off, and the whole station was upside-down."

Although NASA has been unable to determine how the animal got on board, lab analysis of the beast's droppings suggests that it's the same raccoon that caused hell and tarnation on the ISS during Expedition 7 in 2003. While none of the previous crew's members would admit to feeding the raccoon"which would explain its return"many expressed affection for the animal.

"I call raccoon Kosmo-Rascal, after favorite children's book," Expedition 7 Commander Yuri Malenchenko said. "If we caught him, I think we might have used him in benign experiment, maybe about training to do tricks. Is true nobody wants air filter clogged with nutshells, but nobody wants raccoon hurt, either. So?"

ISS personnel agree that, while unexpected, the raccoon is not entirely unwelcome.

"This is how astronauts learn to deal with new things"by living through them," Fincke said. "Zero gravity, environmental adaptation, varmints... all these are unplanned things that surprise us when we take a step into space. But we aboard ISS Expedition 9 haven't met a problem too big for us yet, and we'll work this raccoon thing out sooner or later. Hopefully, before the clever little dickens figures out how to work the airlocks."