The Trolls Among Us 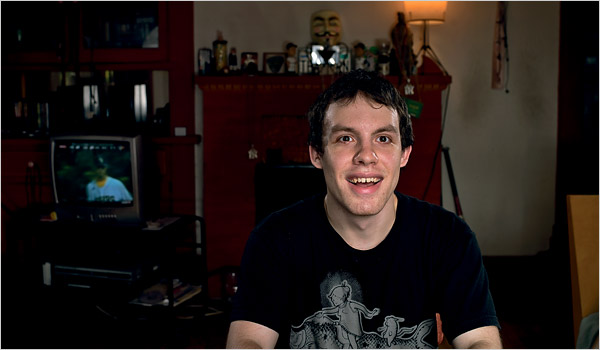 Weev (not, of course, his real name) is part of a growing Internet subculture with a fluid morality and a disdain for pretty much everyone else online.


Why inflict anguish on a helpless stranger? It’s tempting to blame technology, which increases the range of our communications while dehumanizing the recipients. But while technology reduces the social barriers that keep us from bedeviling strangers, it does not explain the initial trolling impulse. This seems to spring from something ugly " a destructive human urge that many feel but few act upon, the ambient misanthropy that’s a frequent ingredient of art, politics and, most of all, jokes. There’s a lot of hate out there, and a lot to hate as well.

Many trolling practices, like prank-calling the Hendersons and intimidating Kathy Sierra, violate existing laws against harassment and threats. The difficulty is tracking down the perpetrators. In order to prosecute, investigators must subpoena sites and Internet service providers to learn the original author’s IP address, and from there, his legal identity. Local police departments generally don’t have the means to follow this digital trail, and federal investigators have their hands full with spam, terrorism, fraud and child pornography. But even if we had the resources to aggressively prosecute trolls, would we want to? Are we ready for an Internet where law enforcement keeps watch over every vituperative blog and backbiting comments section, ready to spring at the first hint of violence? Probably not. All vigorous debates shade into trolling at the perimeter; it is next to impossible to excise the trolling without snuffing out the debate.

Ultimately, as Fortuny suggests, trolling will stop only when its audience stops taking trolls seriously. “People know to be deeply skeptical of what they read on the front of a supermarket tabloid,” says Dan Gillmor, who directs the Center for Citizen Media. “It should be even more so with anonymous comments. They shouldn’t start off with a credibility rating of, say, 0. It should be more like negative-30.”

Before the advent of the Internet,
I thought that trolls were bad scary guys
who lived under bridges in children 's fairy tales.

Why inflict anguish on a helpless stranger?
It’s tempting to blame technology, which increases the range of
our communications while dehumanizing the recipients.
But while technology reduces the social barriers that keep us
from bedeviling strangers, it does not explain the initial trolling impulse.
This seems to spring from something ugly " a destructive human urge
that many feel but few act upon

For quite a while, the word that we have applied to the practice of taking pleasure
from the pain or misery of someone else was: " sadism. "
1 Reply
2
Reply Tue 7 Oct, 2008 10:54 pm
@OmSigDAVID,
OmSigDAVID wrote:

will u define the words " Internet Troll "
just so that I can have a clear, unbiased definition ?

It's a subjective term, so you'll have to come to your own conclusion about what constitutes trolling. Here is a good explanation:

What is a troll?

"Troll," in the context of message boards and the like, describes somebody who is posting just to be confrontational or to raise hackles. One example might be a teenager who finds a Jewish message board and posts, "The Holocaust never happened." The teen may not know or care one way or the other--he just wants a reaction. He wants to piss people off. He is a troll.

The main point about trolls is that they intentionally mislead others. As the Free Online Dictionary of Computing (http://foldoc.doc.ic.ac.uk/foldoc/foldoc.c gi?troll) notes, "Trolling aims to elicit an emotional reaction from those with a hair-trigger on the reply key. A really subtle troll makes some people lose their minds."

In short, you've got two possibilities--ignore the troll or argue with him. My recommendation is as follows: If the person is a well-known troll with low credibility, post once to point out the flaws and then ignore him. If there's a real chance he may fool people who don't know better, knock him down with facts.

He wants to piss people off. He is a troll.

The main point about trolls is that they intentionally mislead others.

OK, then;
from this, I understand that if someone wishes to be PROVOCATIVE and sincere,
but he does not deviate from accurate facts (does not intentionally try to mislead)
then he is not "a troll"
(being mindful of your observation that this is decided subjectively).

A post I consider trolling someone else may find thought-provoking.

1 Reply
Below viewing threshold (view)
-5
Reply Wed 8 Oct, 2008 01:36 am
@OmSigDAVID,
Om Sig--Your point about subjectivity is well taken. In past threads, BEFORE I was labeled and before people displayed pictures of animals after my posts, I NEVER DEVIATED FROM ACCURATE FACTS AS I KNEW THEM AND USUALLY POSTED EVIDENCE AND DOCUMENTATION IN THAT REGARD.
Of course, I was and am considered provocative. The Mensheviks were considered provocative but only to the Bolscheviks.
1 Reply
1
Reply Wed 8 Oct, 2008 01:43 am
@Robert Gentel,
Yes.
I 'm sure that 's true.
Human mentation is full of surprizes.
U never know.

But ,dear sir, how does that credibility rating move up or down? Would a Jew in 1937 Germany,writing a column about the rights of German Jews in the Reich gain a higher rating than -30 or would it zoom downwards to -70 the first day before the gun butts rap upon the door? For those who are not objective, there is no crediblity given to anyone who does not kow tow to their line. For those who believe that the US government set up the attack n 9/11,there is to be no credibility given to any other view no matter how many documents or evidence is laid out.

Case in point. a few years ago there was a vocifereous argument going on concering AIDS. Some held that the virus was created by doctors and had been used as a weapon against minorities. Now, irrefutable evidence is coming to the fore to show that AIDS has indeed been present for nearly 100 years.

A good tactic for someone whose fervent wish is to be liked but not a good choice for those who hold principle superior to social acceptance.

Mr. Gentel is entitled to credit for that.
I merely reflected what he 'd said.

In past threads, BEFORE I was labeled and before people displayed
pictures of animals after my posts,
I NEVER DEVIATED FROM ACCURATE FACTS AS I KNEW THEM
AND USUALLY POSTED EVIDENCE AND DOCUMENTATION IN THAT REGARD.
Of course, I was and am considered provocative.
The Mensheviks were considered provocative but only to the Bolscheviks.

The sine qua non (that without which there cannot be)
and the innermost essence of liberalism is DEVIATION
from whatever rule or standard the deviant is being liberal about.
For instance,
if a poker player rakes in the pot
after claiming that he has a flush,
when, in fact he has 4 spades and a club:
he is taking a LIBERAL interpretation of the rules of poker.

If u contract with a man and pay him for 8 hours a day of his work,
and he leaves after 5 hours, declaring: " that 's close enuf " to the 8 hours,
he is taking a LIBERAL interpretation of that contract.
If he takes the money and runs after 3 hours of labor,
declaring: " that 's close enuf " he is thereby
taking a MORE LIBERAL interpretation of the contract for 8 hours of daily work.

Not all liberalism is necessarily fraudulent or deceptive;
e.g., if a man dresses in a tuxedo and sneakers,
he is taking a liberal interpretation of customary patterns of dress,
but he can logically justify himself by pointing out that he is free
and he has the right to dress however he damn pleases.

Similarly, I take a liberal vu of conventional spelling,
to which I have never pledged my allegiance.
I choose to substitute fonetic spelling for those words
( or some of those words) that r not spelled foneticly,
e.g., woud, coud or shoud and in omitting any "UGH"
from the word THO.

I am open and obvious about it, and fully within my rights to do it,
rejecting conservation of the non-fonetic parts of conventional spelling
( or SOME of them, anyway; I retain use of silent letters
that serve as guides to pronunciation).

1 Reply
-1
Reply Wed 8 Oct, 2008 03:48 am
As the term generally appears on these threads it seems to be used by people who have no answer to a post which they disagree with. An all purpose insult similar to pulling out a tongue.

When it has an effect the user of it has silenced the other. It's an attempt at censorship and is thus contra free speech.
2 Replies
1
Reply Wed 8 Oct, 2008 03:58 am
@OmSigDAVID,
love that article, like a pitcher telling the batter to put on a helmet by beaning him in the head from the mound.

lol
0 Replies
1
Reply Wed 8 Oct, 2008 04:15 am
@spendius,
My general sense of the situation,
based upon observation, is that what u wrote is accurate.