They found Bigfoot!!! (NOT)

ATLANTA, Aug. 21 (UPI) -- Two Georgia men who claimed to possess the body of a slain Sasquatch said the mythical beast was actually a Bigfoot costume filled with road kill.

Rick Dyer and Matt Whitton, a former police officer who was fired once the hoax was exposed, said the Bigfoot scam was a joke and they never intended their story to become as sensational as it did, WSBTV, Atlanta, reported Thursday.

"All this was a big joke. It got into something way bigger than it was supposed to be," Whitton said.

The men said the item they had claimed was Bigfoot's corpse was actually nothing more than a costume filled with opossum road kill and leftovers from a slaughterhouse.

However, Whitton said he disagrees with Clayton County Police Department Chief Jeff Turner's decision to fire him on the grounds that the hoax affects his credibility.

"I don't believe it does affect my credibility at all because this is Bigfoot," said Whitton. "It would be one thing if I came out and said that I had something else that is tangible or real, but right now, as far as I'm concerned, there is no real Bigfoot."
Type: Discussion • Score: 5 • Views: 2,558 • Replies: 11
2
Reply Thu 21 Aug, 2008 09:02 pm
@dagmaraka,
Warning! The picture below would be graphic if it were real.

1 Reply
3
Reply Thu 21 Aug, 2008 10:18 pm
@dagmaraka,
what thats crazy big foot come on
1 Reply
1
Reply Fri 22 Aug, 2008 03:04 am
@dancerdoll,
I saw something about this and with all the crazy **** going on in the world i really wanted it to be true.I wanted it to be Like one of those Pre-historic fish they suddenly find swimming out in the ocean that they thought was extinct for millions of years.....and suddenly one day "poof!" heres bigfoot!

Well That'd just be Good talk for the water cooler,U know? Im sorta dissapointed to be honest.
0 Replies
2
Reply Fri 22 Aug, 2008 05:44 am
Good. Now that this hoax has been exposed, I can reveal that I have discovered the breeding grounds of the elusive Figboot.
1 Reply
3
Reply Fri 22 Aug, 2008 08:15 am
@patiodog,
i bet you've been breeding Figboot in your basement all this time.
1 Reply
2
Reply Fri 22 Aug, 2008 08:35 am
I watched a show on the history channel recently that was trying to discredit that famous video of Bigfoot strutting away from the camera. He’s walking over some rocks by a river bed in the woods, and looks back over his shoulder at the camera while heading out. 70’s style look to the film.

Anyway they tried to duplicate the movements made with a pretty big athlete and the guy could not physically move the same way. Then tried to zoom in on the footage to tell if it was a mask and costume, and they were pretty convinced it wasn’t. Although, I have to admit that part was kind of like… okay I just see some fuzzy blobs on the screen, whatever you say, hah. It was pretty cool though actually.

I’m not saying it’s proof, but it’s really interesting! It’s one of those things that I’d like to believe in, in a kid sort of way. He’s out there somewhere!

1 Reply
2
Reply Fri 22 Aug, 2008 11:52 am
@Razrez,
I have never seen a sasquatch, however, I know some very credible hunters and outdoorsmen who say they saw something, but they won't go into much detail for fear of being called nuts. Who knows.
1 Reply
1
Reply Fri 22 Aug, 2008 01:34 pm
@cjhsa,
No kidding? That's pretty cool honestly. The guy that caught the footage in that clip I was talking about has since died, but his partner that was with him is alive and talks about it in the show. He claims that at the time it was horrible because people thought they were crazy and I think even started saying it was a hoax so people would leave them alone. The guy's wife almost left him over it and everything.

Honestly it's probably better if sasquatch doesn't get discovered. God knows what we'd do to them.
0 Replies
1
Reply Fri 22 Aug, 2008 01:39 pm
Here's another thread I started a while back


...well, I shudder to think what exactly you might be imagining.

Figboots breed at a particular bargain motel on a particular north-south interstate that runs from the upper midwest to the gulf states. I won't say more at risk of betraying their location.
0 Replies
1
Reply Wed 18 Nov, 2020 08:22 am 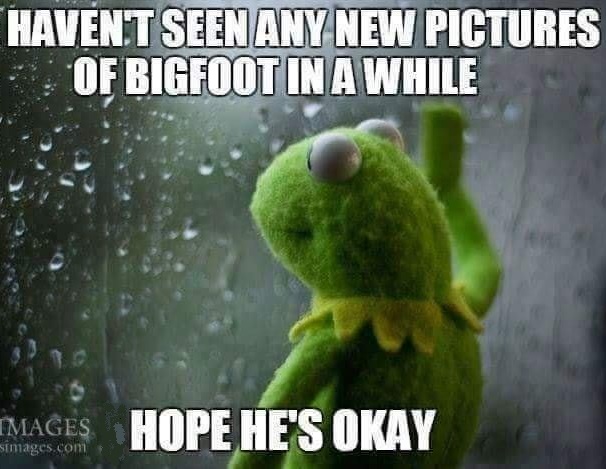