Secret of the 'lost' tribe that wasn't - hoax

Forums: South America, Brazil, Amazon
Email this Topic • Print this Page
Reply Mon 23 Jun, 2008 09:18 am
Secret of the 'lost' tribe that wasn't
Tribal guardian admits the Amazon Indians' existence was already known, but he hoped the publicity would lift the threat of logging
by Peter Beaumont, foreign affairs editor The Observer, Sunday June 22, 2008 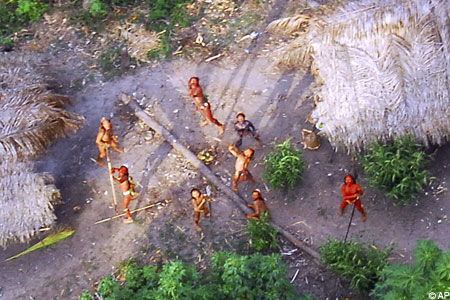 Warriors from the Amazon basin tribe, above, paint their bodies red and fire arrows to ward off the plane carrying José Carlos Meirelles, who says that he released the picture in order to highlight the plight of indigenous people in the jungle

They are the amazing pictures that were beamed around the globe: a handful of warriors from an 'undiscovered tribe' in the rainforest on the Brazilian-Peruvian border brandishing bows and arrows at the aircraft that photographed them.

Or so the story was told and sold. But it has now emerged that, far from being unknown, the tribe's existence has been noted since 1910 and the mission to photograph them was undertaken in order to prove that 'uncontacted' tribes still existed in an area endangered by the menace of the logging industry.

The disclosures have been made by the man behind the pictures, José Carlos Meirelles, 61, one of the handful of sertanistas - experts on indigenous tribes - working for the Brazilian Indian Protection Agency, Funai, which is dedicated to searching out remote tribes and protecting them.

In his first interviews since the disclosure of the tribe's existence, Meirelles described how he found the group, detailed how they lived and how he planned the publicity to protect them and other tribes in similar danger of losing the habitat in which they have flourished for hundreds of years.

Meirelles admitted that the tribe was first known about almost a century ago and that the apparently chance encounter that produced the now famous images was no accident. 'When we think we might have found an isolated tribe,' he told al-Jazeera, 'a sertanista like me walks in the forest for two or three years to gather evidence and we mark it in our [global positioning system]. We then map the territory the Indians occupy and we draw that protected territory without making contact with them. And finally we set up a small outpost where we can monitor their protection.'

But in this case Meirelles appears, controversially, to have gone out to seek and find the uncontacted tribe in an area where it was known to be living.

According to his account, the Brazilian state of Acre offered him the use of an aircraft for three days. 'I had years of GPS co-ordinates,' he said. Meirelles had another clue to the tribe's precise location. 'A friend of mine sent me some Google Earth co-ordinates and maps that showed a strange clearing in the middle of the forest and asked me what that was,' he said. 'I saw the co-ordinates and realised that it was close to the area I had been exploring with my son - so I needed to fly over it.'

For two days, Meirelles says, he flew a 150km-radius route over the border region with Peru and saw huts that belonged to isolated tribes. But he did not see people. 'When the women hear the plane above, they run into the forest, thinking it's a big bird,' he said. 'This is such a remote area, planes don't fly over it.'

What he was looking for was not only proof of life, but firm evidence that the tribes in this area were flourishing - proof in his view that the policy of no contact and protection was working. On the last day, with only a couple hours of flight time remaining, Meirelles spotted a large community.

'When I saw them painted red, I was satisfied, I was happy,' he said. 'Because painted red means they are ready for war, which to me says they are happy and healthy defending their territory.'

Survival International, the organisation that released the pictures along with Funai, conceded yesterday that Funai had known about this nomadic tribe for around two decades. It defended the disturbance of the tribe saying that, since the images had been released, it had forced neighbouring Peru to re-examine its logging policy in the border area where the tribe lives, as a result of the international media attention. Activist and former Funai president Sydney Possuelo agreed that - amid threats to their environment and doubt over the existence of such tribes - it was necessary to publish them.

But the revelation that the existence of the tribe was already established will provoke awkward questions over why a decision was made to try to photograph them - a form of contact in itself - in order to make a political point.

Meirelles, one of only five or so genuine sertanistas, has no regrets, arguing that the pictures and video released to the world were powerful and indisputable evidence to those who say isolated tribes no longer exist. 'Alan García [the President of Peru] declared recently that the isolated Indians were a creation in the imagination of environmentalists and anthropologists - now we have the pictures.'