I Want a New Puppy... What kind Should I Get?

Forums: Pets And Garden, Puppy
Email this Topic • Print this Page
Reply Wed 12 Mar, 2008 06:14 am
Most of you know that Gracie moved out with Ky last November. This is the first time in over 19 years that I have been petless. Actually, other than a few months here and there or my freshman year in college, this is the first time in my life that I haven't had at least one animal around me.

I LOVE not having the pet hair.

I hate not having the hair to pet.

Cub and I are considering saving a dog from the SPCA. (I'm trying to convince myself that in doing so those horrid sad eyed commercials will stop playing on my TV!)

But, what kind? I love Cavaliers... A picture of three in a basket posted by Chai inspired this thread. Had never heard of them, but glitterbag introduced me to Vizsla's on her thread... They are way too cute! Then again beagles have never done me wrong.

Cub wants one he can run with. I want one that will be cuddly and calm.

Convince me that YOUR suggestion is the correct choice.

Cub and I are considering saving a dog from the SPCA. (I'm trying to convince myself that in doing so those horrid sad eyed commercials will stop playing on my TV!)

(This is also a ploy to get more really cute pictures so I can have puppies and sunshine on a rainy day without the gnawed furniture legs.)

I vote for the shelter mutt. The commercials won't stop, but you will actually feel better when you see one:

A bunny? Is Deb up for adoption?

We did have a guinea pig for a while that I loved. Remember Ginny the Guinea? We discovered she was a he and had to change his name from Jenny cause he wouldn't answer to any other name. he was cuddly, but I'm not sure a bunny or guinea would keep up with Cub's 6'3 stride.

A bunny? Is Deb up for adoption?

Somehow calm and cuddly does not come to mind when you mention dlowan.
0 Replies
1
Reply Wed 12 Mar, 2008 07:06 am
That's just her A2K face. I see through all her nashing of teeth.

There is an older beagle at the pound right now named Beaglejuice...

Cub is wanting a German Sheperd, but all of the shelter ones are mixed with chow, rot, pit etc making it a questionable safety risk since they aren't puppies.
0 Replies
1
Reply Wed 12 Mar, 2008 10:03 am
Go with the Cavalier, squinney! This is a Google image, but it looks exactly like our Liam.

They weigh 18-22 lbs. when fully grown...big enough to jump on the couch or the bed, but not too big to lift. They're fairly quiet dogs with barks that are not sharp or annoying. They're the only small dogs I could find with calm temperaments. And they're so soft! They LIVE to cuddle. In fact, all they really want is to be near people. In England, they're called "shopkeepers' dogs" because you see them in so many small businesses. That would be a great environment for them. Also, they're very smart and extremely easy to train. They can use a lot of exercise or not very much. They're submissive, not dominant...perfectly content to let the other dogs be the "alpha." Very, very sweet dogs.

One caveat: If you have to leave the dog alone for most of the day, this is not the right choice. Cavaliers are bred to be companions, and they need somebody around most of the time. Also, this is perhaps the last dog you should consider if you want a guard dog. They will bark if an unknown person comes to the door, but as soon as they see them, they'll assume it's their new best friend. After all, who would hurt something with a face like this?! 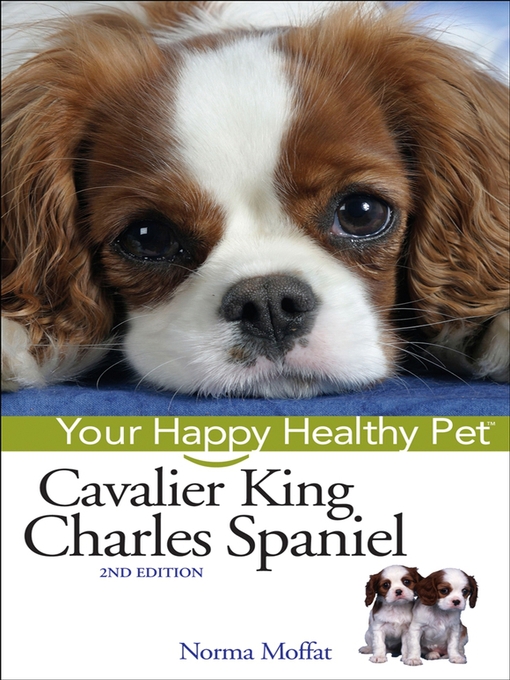 A show I watched about them said they love nothing better than for a couple or more of them to fall together in a snuggle pile.

They're popular in Britain, and are the type of dog that, let's say an older person likes to have, because they are quite satified with just short walkies, if that all you're able to give.

Someone down the street has one. The other day I was walking by and heard him barking. I looked over, and he was looking out the picture window, wagging and just wanting to get out and greet me. Not barking in an obnoxious way, just very sweet.

I posted the same info.
0 Replies
1
Reply Wed 12 Mar, 2008 10:49 am
Squinney
Squiney, would you be satisfied by putting a collar and leash on the Bear and dusting him with flea powder?

http://www.youtube.com/watch?v=UlXO246W_uo Wait for the smile!!
0 Replies
1
Reply Wed 12 Mar, 2008 04:50 pm
here are miss cleo and mr bailey - ehbeth's rescue dogs -they are about 7-8 years old now .
it would be difficult to find a pair of more lovable mutts !
they were a bit shy at first , but are really good dogs .
they do get along well with each other but also like to have an "evening" tussle - if one won't start it , the other one will . there is a lot of snarling , jumping , running , mock fights ... but after a few minutes they are ready to settle down quietly - really funny .
here we are on an outing near lake ontario - they both had had enough running around and were ready to rest with mrs h .
cleo is probably part "king charles" - judging by her front legs ; bailey is part spitz - border collie and who knows what .
they are both very different individuals . bailey likes to socialize with all kinds of other dogs - the bigger the better . cleo likes to stay with the more sedate humans .
characters they are both !!!
hbg

I really wish I had sound on my computer for this one...

I love how the big dog comes in to show them how it's done.
0 Replies