The Real Little England Is In Eymet, France

The Real Little England Is In Eymet, France 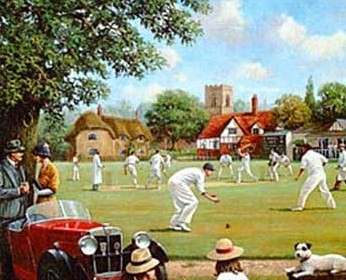 "HOW hundreds of ex-pats, fed up with obnoxious youths, incompetent councils and politically correct nonsense, have turned a tiny village into a very Brtish idyll."

The Express is in the French town of Eymet, twinned with a vision of Britain rarely seen beyond the Mail's Keith Waterhouse column and Polly's Tea Rooms, Marlborough branch.

It is home to ex-pats buying cans of Heinz tomato soup (American), Weetabix (founded by South Africans) and Tetley Tea (produced Indian tea giant Tata) from Kevin Walls' corner shop, the Magasin Anglais. There are tea rooms, market stalls selling stilton cheese and British newspapers. There are white men in cricket whites playing cricket. Of the town's 2,600 residents, around one third were born in the UK.

Says the Express: "If you want to live in France but don't speak French it seem this is the place to be." Or there's Euro Disney, that other theme park, near Paris.

In Eymet, the Express sees children playing hide and seek in meadows on the way to school. It sees unlocked doors. It sees knife crime only on the television.

"I like living here because it's like England 50 years ago," says Simon Colebourne. And just like in 1958, Mr Colebourne runs an internet cafe. As you'd expert the cafe is chock full with ex-pats sat indoors "using the computers to e-mail friends at home and regale them with tales of the good life".

As the Express says in headline form: "WE FOUND A LOST BRITAININ THE HEART OF FRANCE."

Lost. And maybe it should be lost once more.

Years from now, when the Internet connection to Eymet has been cut off, the place will become overgrown and impenetrable from the outside. German anthropologists will hack through the undergrowth and discover a town of inbred locals communicating in a patois learnt from Terry Thomas DVDs, Test Match Special and Sacha Distel's back catalogue.

Of course, it could all be a lie, a plot by the Express to deter the foreigners, those Rogarian masses, from coming to Blighty. Reading the Express is to discover that the UK is rubbish, a place where only devils should tread. No, dear Mr Nastasie, Mrs Olga and your million hungry mouths, the real England is to be found in France.

Go there and try your luck. You will find a warm welcome and a gollywog on every lamppost.

Bon voyage, as they say in Eymet-under-Umpire WE FOUND A LOST BRITAIN...IN THE HEART OF FRANCE HUNDREDS of expats, fed up with obnoxious youths, incompetent councils and politically correct nonsense, have turned a tiny village into a very British idyll.

With its winding rivers, stone bridges, hedge­rows and undu­lating hills you could be forgiven for thinking you were in the depths of the British countryside, especially when you pop along to the corner shop owned by Kevin Walls.

Behind the old-fashioned counter he cuts a jovial figure and, while his customers chat away about plot lines in The Archers, the availability of Ealing comedies on DVD or the price of Branston Pickle, he totals the cost of their shopping on his cash register.

In this proud land of foie gras and truffles, they are buying marmalade and Tetley tea, Heinz tomato soup, Weeta­bix and British pork sausages.

The curious scene continues in the medieval square in the heart of the town where the residents congregating in the cafés and bars, after work stops promptly at 5pm, can be found supping pints of ale, reading British papers, or discussing next weekend's fixture on the cricket ground.


With its tea rooms, market stalls selling Stilton and Cheddar and church choir singing hymns and madrigals, there is no mistaking the English influence on the picturesque French town of Eymet. But however long you've lived here, seeing white-clad cricketers in the middle of France remains an incongruous experience.

There is no doubt that Little England - as the 13th century town on the river Dropt is often called - has become synonymous with all that is best from our side of the Channel.

But the most surprising thing about the thriving fortified market town in the Dordogne region of South-west France is the sheer number of Brits who live here all year round. For years it has had the highest proportion of British residents of any French town, or anywhere in mainland Europe. Of its 2,600 residents about a third were born in the UK.

Research published this week suggests that no fewer than four million of the 10 million Brits looking to buy a property abroad in the next year will consider leaving permanently due to concerns about crime, health provision and the incompetence of the Government.

During the past 25 years Eymet has witnessed a British invasion. Here, it seems, one can manage without so much as an "excusez-moi" or a "parlez-vous Anglais?" If you want to live in France but don't speak French it seems this is the place to be.

"Most of them don't speak French," says Nathalie, a French woman working in a computer shop called MCD Informatique (owned by a Brit) who says 80 per cent of the clientele are British.

But that isn't the reason for settling here, for this is a small town that offers something rare and timeless. It's the sort of place we forgot existed. An idyll where it is possible to eat al fresco for most of the year, having left your front door unlocked, and not spend all your salary on your mortgage. It is a place where gun and knife crime is something you only experience dramatised on television, where children wander to and from school, perhaps stopping off before dinner for a game of hide and seek in a meadow.

"I like living here because it's like England 50 years ago," says Simon Colebourne, one of the new arrivals. He moved here with his wife Karen and their children from Bath in January 2003 and the couple run an internet café around the corner from Kevin Walls's shop, Le Magasin Anglais. "The locals are really receptive, considering it's like a re-invasion of South-west France," he adds. "Fif­teen years ago Eymet was run-down and forgotten. Thanks to the influx of foreigners it's booming." Café Eymet, run by the Cole­bournes, is typical of the sort of burgeoning, modern businesses run by the expats. Every day it is filled with Brits enjoying coffee and cakes and using the computers to e-mail friends at home and regale them with tales of the good life.

This is not at all surprising when you consider the good climate, the lack of crime and the property prices in a part of France that is considered such a British area that it is nicknamed Dordogneshire.

According to research by Mont­esquieu University in Bord­eaux, Britons are flocking to France due to a desire to live in a country where old-fashioned values prevail.

"Freshly farmed food, the security of a tight-knit community, an auth­entic experience that fits with their dreams - all of these things people associate with a typical French village that they feel no longer exists in Britain," says Marie-Martine Gervais-Aguer, author of the study. "There is a nostalgia for the way British villages used to be 50 years ago."

In Britain the weather is often soggy, cold and grey; property prices bear no relation to income; and, according to recent Home Office figures, almost seven in 10 of us is plagued with worries about gun and knife crime, burglary and being mugged.

In the Dordogne a family home costs a fraction of what it would in Hampshire, Sussex, or many other rural counties in the UK. The area was once full of abandoned farms. These have now been turned into covetable small estates but are within the reach of the average British family. A three-bedroom home costs £100,000-£250,000 and that includes a swimming pool and an acreage of land that could not be bought in the Home Counties for such a sum. A chateau can be purchased for £500,000.

It's hardly surprising that the Dordogne is now home to some 20,000 so called Anglo-Saxons - a figure which can swell to 100,000 in the summer. Many of them stay in the legions of quaint bed and breakfasts, run by the army of incomers, where it is possible to choose bacon and eggs for breakfast if you don't fancy croissants.

Eymet appears to prove that it is possible for English and French to peacefully co-exist. Much of this appears to be due to the sensitivity of incomers like Kevin Walls who, 10 weeks after opening, decided to translate the name of his store, where the bestselling item is Walkers Crisps.

"It used to be The English Shop, which I think was a bit unfriendly towards the locals," he says, adding that other shop owners in the town have welcomed him; not so surprising when you learn that people come from two hours' away to buy bacon and Shredded Wheat, drawing people into Eymet from the region.

Eymet Cricket Club celebrates its 25th anniversary this year. The team began playing on the town's football pitch, with a temporary square created from matting, but the local authorities offered it a ground with stand and nets.

If local elections go well for the expats, more concessions for Brit­ish residents seem likely. On March 9 rules will come into force allowing non-French citizens to stand in council elections. Five members of Little England are ready to serve their adopted town.

The three candidates for mayor, who are all French, jumped at the chance of having Britons on their team. "It's very flattering to be asked and is a great sign of acceptance," says Julian Urriata, 41, from North-west London, who set up a stone flooring business in Eymet three years ago.

Also standing is Caroline Haynes, a retired solicitor from West London. Together with Urriata, she is supporting mayoral candidate Jean-Raymond Peyronnet who, if elected, intends to set up weekly open days run by his two Anglo councillors to help the British community with administrative questions and push for bilingual newspapers and electricity bills.

Tony Martin, 63, Eymet's computer seller, thinks this development will be good for this corner of France. Several years ago he closed his business in Britain and moved his family, including three children and three grandchildren. He loves the safe streets and good schools.

"There's no question there are a lot more things right in France than wrong," he says. "We could learn a lot from
them back home in Britain and maybe they can learn a bit from us being out here."

England's favourite dish is curry, by the way.

The Guardian: Not content with their place in the sun, les Anglais go in search of council seats