Forums: Spirituality And Religion
Email this Topic • Print this Page
Reply Sat 12 Jan, 2008 02:27 pm
The Holocaust was a 20th century inquisition done under cover of the Nazi party. Hitler was catholic; and when it became known that Pope Pius XI supported Hitler, the Roman Catholic vote swept Hitler into power in 1933.

Read what the press of the Spanish dictator, Franco, published following Hitler's death. It said, "Adolf Hitler, son of the Catholic Church, died while defending Christianity." It goes on to say, "Over his mortal remains stands his victorious moral figure. With the palm of the martyr, God gives Hitler the laurels of Victory."

Walter Schellenberg, former chief of Nazi counter-espionage made this statement: "The S.S. organization had been constituted by Himmler according to the principles of the Jesuit Order. Their regulations and the Spiritual Exercises prescribed by Ignatius of Loyola were the model Himmler tried to copy exactly. Himmler's title as supreme chief of the S.S. was to be the equivalent of the Jesuits' 'General' and the whole structure was a close imitation of the Catholic Church's hierarchical order."

Signing the concordat is Cardinal Pacelli (later to become Pope Pius XII). By 1933 he was the Vatican Secretary of State. Second from left is Franz von Papen, a sinister Nazi and devout Roman Catholic who was Hitler's ace diplomat and the Vatican's agent in helping to bring Hitler to power. Standing at the far right can be seen the little-known Vatican prelate, Montini, later to become Pope Paul VI. 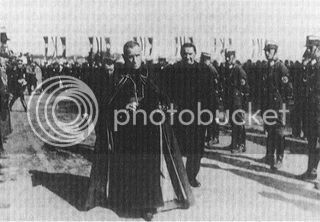 Notice the Catholic church in the background as if it represented the foundation of the party.

"I learned much from the Order of the Jesuits. Until now, there has never been anything more grandiose, on the earth, than the hierarchical organization of the Catholic church. I transferred much of this organization into my own party."
-Adolf Hitler
Type: Discussion • Score: 0 • Views: 5,133 • Replies: 3
No top replies
2
Reply Sat 12 Jan, 2008 02:47 pm
I love it that The Vatican Gift Shop comes up as an ad on this thread.

So Diana, what's the point? So what if Hitler was inspired by the Catholic Church, he was also inspired by the way Americans put native populations onto reservations. He got some really big ideas from the Turks and their horrendous treatment of Armenians. We are talking about a generation that is now very old or dead. A new generation has taken the reins in Italy and Germany. By the way, I'm Jewish and I would need more than two hands to count up my family members that died in the camps or were shot outright. Are you suggesting I get my revenge by going after Catholics? I've got better things to do to make this world a nicer place.
0 Replies
2
Reply Sat 12 Jan, 2008 02:52 pm
I agree, Green Witch. There is more than enough group hatred going around this earth as it is. We don't have to resurrect a horrendous part of history to find yet another group to hate!
0 Replies
1
Reply Sun 13 Jan, 2008 09:02 am
Nominal christianity has much blood on its hands. The Lutherans also supported Hitler.

Here is an observation by Sherlock Holmes' Creator:

I can clearly see that, in honesty, men must either give up war, or else they must confess that the words of the redeemer are too lofty for them, and that there is no longer any use in pretending that His teaching can be reduced to practice. I have seen a Christian minister blessing a cannon which had just been founded, and another blessing a warship as it glided from the slips. They, the so-called representatives of Christ, blessed these engines of destruction which cruel man has devised to destroy and tear his fellow-worms. What would we say if we read in holy writ of our Lord having blessed the battering-rams and catapults of the legions? Would we think that it was in agreement with his teaching?