Forums: Books, Reading, New Books, Reading List, Book
Email this Topic • Print this Page
2
Reply Tue 30 Dec, 2014 09:33 pm
@Olivier5,
If there's two of us, maybe it isn't so 'important' after all. It's a darn shame the don't put out Comic Book Classics anymore. They could wrap up a thousand page book in fifty pages, and that included illustrations.
1 Reply
1
Reply Tue 30 Dec, 2014 09:37 pm
@somewhatsolved,
You are reading a translation of The Divine Comedy by Dante Alighieri -

I've read him twice but never all the way through, once in italian (a beginning italian class, where I, still in high school, went to a local college on Monday afternoons for the school year, me the only student (this was in the late '50's, just around the onset of advanced classes for people in high school). What do I remember of that, just about nothing but that I enjoyed it, as the nun was from Italy and the language was beautiful.

Later, first semester college, small catholic college, we read the Inferno in english. I would still recognize some bits of that now.
That was long ago, and a lot has changed in my views of life, but I still am attracted to Italy, for all its faults and joys.
In the nineties, I took a barrage of university extension italian classes; my teacher was born in Padova and studied in Bologna. We became pals. Maybe it was my miserably written essays that she liked.. not my grasp of grammar, but the opinions I threw around.

good transit/porch/holiday reading
0 Replies
2
Reply Wed 31 Dec, 2014 03:58 pm
@roger,
Dumas wrote a lot, and aimed at commercial success rather than literary fame. He's something like the 19th century equivalent of Michael Crichton. You have no reason to feel bad about not reading any of his books. There are dozen of better writers which i have never heard of, let alone read.

A few years ago, a French TV channel aired a Dumas biopic featuring Depardieu in the lead role. Problem: Dumas was a 'black' man. His father was a mulato from Martinique, and became a brilliant general in Napoleon's army. The Austrians called him the Black Devil. Not your average gallic face. So there was a mini-scandal, and accusations of 'whitewashing' Dumas' negritude...

I mention this because that's how I learned that Dumas was 'black'. I had read three books by the guy, and didn't know that... So IMO the Dumas whitewashing happened a long time, in public school textbooks...

0 Replies
1
Reply Thu 1 Jan, 2015 04:46 am
Just finished The Lost Symbol by Dan Brown.
0 Replies
1
Reply Sun 4 Jan, 2015 09:42 pm
Not fully off topic: A friend served jury duty a month ago. During the voir dire, the attorneys asked prospective jurors what was the last book you read? People who answered that they did not read were impaneled. Now, either the attys wanted a jury of people who were uniformed or the case involved a publisher, editor or author.
1 Reply
1
Reply Sun 4 Jan, 2015 09:47 pm
@ehBeth,
ehBeth wrote:

she's a good writer. You're right - more to read by Donna Tartt would be terrific.


While reading The Little Friend, I occassionally had to put the book down in the lap and say "Get out of my head!" The little girl in that book? Except for being in charge of the nativity play, that was me.

I should read that one again.
0 Replies
3
Reply Sun 4 Jan, 2015 10:58 pm
@plainoldme,
There's a not uncommon line of reasoning that juries are made up of people who are too stupid to get out of jury duty.

One book I'm reading right now is Christopher Wilson's "The Ballad Of Lee Cotton". I'm enjoying it - it's fun, but thoughtful. Sort of a cross between Vernon God Little and Forrest Gump. 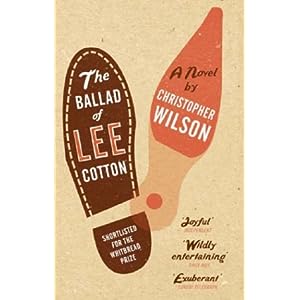 I bought the paperback edition, which is OK, except for the fact that the print is very small . The maps are well done, but again everything is tiny and cramped.

Next time, I'll buy the hard cover edition.
0 Replies
2
Reply Fri 9 Jan, 2015 03:51 am
@ossobuco,
I agree. Also from all that I have learned in my personal before read study Dante had made the exact version of stanza and ryme for the Italian language and it is meant for that language. It is huge. HOWEVER, even though it was made for a western language you should listen to the japanese audio book version.

Yes I am reading it (was on amazon kindle for free) but I try to model myself after the Asmovian Writer Guidelines. Albite I slightly modified them to that of focusing on research and self improvement and put them along the 20hrs. a day lifestyle. Fun isn't it.

0 Replies
2
Reply Sun 11 Jan, 2015 09:32 am
Oxford University Press has put out a series of very short introductions -- tiny books the size of pocket diaries -- on an amazing range of subjects. I'm reading the one on Martin Luther. Interesting to consider that his "heresy" succeeded when others did not, although some of the others were goofy.

I recommend the series if you want to know a bit about something from a better source than Wiki.
1 Reply
2
Reply Sun 11 Jan, 2015 11:01 am
@plainoldme,
Martin Luther's so-called 'heresy' succeeded because the time was right for a major reform in the Roman Catholic Church, not because there was anything special about it. His suggested reforms were common sense. Plus he had the backing of some powerful secular rulers, eager to minimize the power that the Pope had wielded over their realms. This had not been true for earlier 'heretics'.
1 Reply
3
Reply Sun 11 Jan, 2015 08:14 pm
@Lustig Andrei,
Don't forget Guttenberg had something to do with Luther's success.
2 Replies
2
Reply Sun 11 Jan, 2015 08:56 pm
@plainoldme,
That's interesting - Gutenberg made books a lot easier to acquire, but surely there must have been an concurrent increase in the ability to read - how/why did that come about?
1 Reply