Pedro Páramo is an absolute masterpiece.
I only hope the English translation is good.
(And it's not that hard a read: here it's compulsory for 9th grade students)
1 Reply
1
Reply Wed 17 Dec, 2008 08:53 pm
@fbaezer,
Ok, ok, I found it (computer desk is a door...) And no, not a hard read so far and I presume it won't change in that.
I think the translation is good, but, of course, how would I know. Sontag does a number in a foreword, now that might get tricky, but I only read a foreward after the book itself.
0 Replies
1
Reply Tue 30 Dec, 2008 05:08 am
Just finished The Gathering, a novel by Anne Enright. A huge Irish Catholic family & the suicide of one of the sons, Liam. Veronica, the sister closest to him, tries to put together the pieces of the jigsaw (through memory, shrewd onservations, black humour & grief) to anderstand why. It is quite a journey. Described (quite aptly I think) in the review below as "a novel of exhilirating bleakness".

0 Replies
1
Reply Tue 30 Dec, 2008 05:15 am
Message for Spike. (I hope you find this.)
I have contacted that site & am waiting on a response from them.
Then I can make contact!
0 Replies
1
Reply Tue 30 Dec, 2008 10:54 am
I just finished a book from an Irish writer, Melissa Hill, "Wishful thinking"
and it was a bit upsetting at times how submissive the women were portrayed in
this story about the lives of several women.

Now I started a great psycho thriller written by Linwood Barclay, a Canadian
writer. The book is in German but the English title is "No time for Goodbye."
A 14 year old girl's parents and brother vanished practically overnight and
25 years later she is still haunted by it, but suddenly signs of the past have
crept up....

Christmas books, such a splendid time.

I've started the autobiography of John Julius Norwich, Trying to Please.
1 Reply
1
Reply Tue 30 Dec, 2008 02:57 pm
@McTag,
almost finished reading : adam gopnik - paris to the moon .
gopnik was born in philadelphia , grew up in montreal and has been writing for the New Yorker since 1986 .
he and his wife decided in the 90's that they did not want their young son - just a baby- to grow up in the U.S. - too much television with barney !
a funny and interesting account of adjusting to life in paris .
on joining a health club "americain" (which wasn't even finished yet) , they astonished the fitness ladies when they declared that thy might want to come "every" day - once a month , perhaps once a week ... but every day ?

have started : harold wilson - a prime minister on prime ministers .
a picture book with text - good for leafing through when tired .

and i have "supership" by my bedside - probably read it half a dozen times - an enjoyable book - even after 30 years .
hbg

0 Replies
1
Reply Wed 31 Dec, 2008 02:11 am
I gave books to all my young nonreaders this Christmas. I hit two bullseyes -- Pot Culture, which ain't exactly littrature, but holds interest for the recipient, and Candy Girl, the tale of an accidental stripper (written by the woman who wrote the movie Juno). Again, this one was chosen for the recipient (how else?). Both of these people like to read, but they don't go out and find books for themselves. I hope these pique something.

Myself, Terry Goodkind's Phantom, and Life Without Us (about what would happen if humans suddenly disappeared). Also bits from Bullfinch's Mythology, which, thanks to the Paperback Book club, I have back in my han ds after many years...
0 Replies
1
Reply Wed 31 Dec, 2008 02:00 pm
While in the hospital, I picked a book at random off the book-cart that comes around and was very pleasantly entertained. It's Number 8 in the Flashman series, Flashman and the Redskins by -- who else? -- George MacDonald Fraser. I'd browsed some of the other Flashmans in the past, found them mildly entertaining. This one includes a lot of really interesting writing, including perhaps the best, clearest and most concise description of the Battle of the Little Bighorn (Custer's Last Stand) that I've ever run across anywhere. Read it and you really begin to understand just what happened.
1 Reply
1
Reply Thu 1 Jan, 2009 06:38 pm

Three Bags Full -- a sheep detective story -- by Leonie Swann
"A witty philosophical murder mystery with a charming twist: the crack detectives are sheep determined to discover who killed their beloved shepherd" 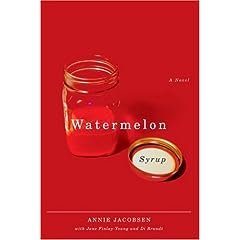 Watermelon Syrup by Annie Jacobsen
"Lexi, a young Mennonite woman from Saskatchewan, comes to work as housekeeper and nanny for a doctor’s family in Waterloo, Ontario, during the Depression. Dr. Gerald Oliver is a handsome philanderer who lives with his neurotic and alcoholic wife, Cammy, and their two children. Lexi soon adapts to modern conveniences, happily wears Cammy’s expensive cast off clothes, and is transformed from an innocent into a chic urban beauty. When Lexi is called home to Saskatchewan to care for her dying mother, she returns a changed person.

At home, Lexi finds a journal written by her older brother during the family’s journey from Russia to Canada. In it she reads of a tragedy kept secret for years, one that reconciles her early memories of her mother as joyful and loving with the burdened woman she became in Canada. Lexi returns to Waterloo, where a crisis of her own, coupled with the knowledge of this secret, serves as the catalyst for her realization that, unlike her mother, she must create her own destiny.

Watermelon Syrup is a classic bildungsroman: the tale of a naive young woman at the crossroads of a traditional, restrictive world and a modern one with its freedom, risks, and responsibilities. "

Partly enjoying this because it's set in Melbourne and they talk with language patterns that you don't miss with 'foreign" books, but notice and enjoy when the book is home grown.

It's woven around 3 women who were at school together, now approaching 60.

I like her handling of the relationships, but one criticism I have is that most of the women are wonderful and wise and most of the men act in ways women would want them to. That's not my experience in real life and it's a little idealised for my taste.