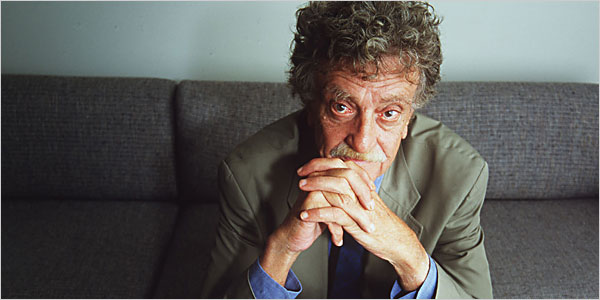 
First page of the article -

And, 'So it goes' has long been one of my throwaway lines.

Two of his most amazing ideas: the Chronosynclastic Infindibulum and Ice-Nine. (Ice-nine still gives me the creeps to think about.)

I went to his website to look for the most recent photo of him. It is closed except for his name & dates and a great image (sigh):

Kurt Voonegut; He always looked like a testament to the effects of smoking ...

Kurt once quipped that he was suiciding by cigarette. I guess because he felt it was one way it could be done. He said he was too much of a coward to take a quicker way. 84 wasn't at all a bad innings, all things considered.
I love his ravaged face. Every bit of his life journey shows.
His life wasn't easy. A lot of illness & depression & sadness in his family. He suffered from depression himself for much of his life. "Bad chemicals", he said.
Those earlier "cult" novels were written to support the his own family & the off-spring of his sister (I think) when she died. "Airport" novels, he called them. Pulp to read on your flight, then discarded. Little did he know ....
0 Replies
1
Reply Thu 12 Apr, 2007 06:50 am
An A2K Kurt V thread from a few years back:

PLAYBOY: Beyond the fact that it's become a profitable way to make a living, why do you write?
VONNEGUT: My motives are political. I agree with Stalin and Hitler and Mussolini that the writer should serve his society. I differ with dictators as to how writers should serve. Mainly, I think they should be - and bio-logically have to be - agents of change. For the better, we hope. ..... <cont>

Please enjoy some wise words from an "apprentice" of his, author George Saunders. This tribute to Vonnegut is some of the best writing advice I've ever taken seriously.

I shall pepper my sentences with...

All the true things I am about to tell you are shameless lies.

Live by the foma [harmless untruths] that make you brave, and kind, and healthy, and happy.

0 Replies
1
Reply Thu 12 Apr, 2007 09:02 am
That New York Times link has, I noticed later, links to a photo slide show, and all the reviews published in the NYT, over the years, of his books, plus all his own articles published there. Loved the slide show myself, haven't read all the rest yet.
0 Replies