Part of the article here, see link for rest -


The word "scrotum" does not often appear in polite conversation. Or children's literature, for that matter. 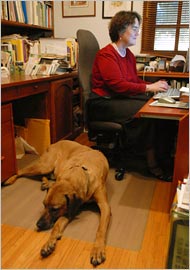 This book included what I call a Howard Stern-type shock treatment just to see how far they could push the envelope, but they didn't have the children in mind,"

I do not personally see an issue with the word scrotum.
I mean.. would people rather the woman use something more.. abrasive?
Like nut sack?

but I do have to agree with the above statement.

It does seem to me that it was just a shock value word and nothing more.
0 Replies
1
Reply Sun 18 Feb, 2007 07:13 pm
I had no idea about dangly bits at all, by whatever word or words, until I was way older. That people fear an anatomical name drives my now much older self nuts... nuts, I tell you.

From my reading of the article, and I've explained my bias, the positioning of the word immediately in the book makes complete authorial sense. I may buy the book in support.

(everything I say is providing additional entendres, which I didn't start out to do, it just happened.)

That librarians back off due to these fears, makes me fear in another way.


Scrotum is too much?


They think kids haven't noticed scrota (or is that "scrotii"?)

Mind you, it is, indeed, an 'orrible word....makes me think of phlegm and such, too...or scrofula.


If I were a man I would be campaigning for new words for my dangly bits.


Vagina sounds nice...although clitoris sounds jangly and high pitched.
0 Replies
1
Reply Sun 18 Feb, 2007 07:45 pm
Speaking of clitoris, there was a person's name in the article that made me look twice. But, y'know, that's mean, Osso.

I'd say there's nothing worse than the ignorance I was brought up in, except , of course, there are many worse things, some of them having to do with body parts. Still, this bodypart fear now completely amazes me. I guess I'm glad it amazes me, or else I'd be back near where I started.
0 Replies
1
Reply Sun 18 Feb, 2007 07:49 pm
Scrotum reminds me of our autumnal Supreme Court.. which..
0 Replies
1
Reply Sun 18 Feb, 2007 07:53 pm
Vagina, on the other hand, confuses me, as I am probably not completely comfortable with the long 'i' ...

but that brings up, snork, penis, which is a fine word, except that people in my experience are very careful when pronouncing incorrectly "Pinus pinea", which I remember as italian stone pine. They mess up the latin. I tried my best in difficult circumstances to say the latin correctly.
0 Replies
1
Reply Sun 18 Feb, 2007 07:56 pm
Vagina...isn't that the capital of Saskatchewan?
0 Replies
1
Reply Sun 18 Feb, 2007 08:08 pm
See, I've always pronounced that to myself - I say a bunch of words wrong since I only know them by reading - Redge-een' - a.
Am I wrong?

Reminds me of a british prof of bacteriology always telling us to iss' o late our bacteria, whereas the rest of us eye'-so-lated them...
0 Replies
1
Reply Sun 18 Feb, 2007 08:17 pm
ossobuco wrote:

See, I've always pronounced that to myself - I say a bunch of words wrong since I only know them by reading

I'm glad I'm not the only one, osso. It was years before I realized how to pronounce adolescence.

(Other than letting kids read words they don't yet know how to pronounce) I don't have a problem with the word "scrotum" in this case. It seems appropriate to the story and adults who have a problem with it are not doing kids any favours by being coy about the correct words for things. Believe it or not there was some controversy here a year or so ago about a book for very young children called "Walter the Farting Dog" -- it was deemed rude! Any kid who watches mainstream TV or can read the headlines in celebrity magazines in the checkout line at the supermarket is old enough to know the correct term for various body parts -- they undoubtedly already know all the slang words. Sheesh.
0 Replies
1
Reply Sun 18 Feb, 2007 08:19 pm
Walter the Farting Dog is very funny. It's his expressions. So sad, so guilty.

I am the absolute queen of knowing words only by reading them, I guarantee it. I pronounced "triumph" as "trimf" (one syllable) for the longest time.

I often refer to it as my Crotchtal Region... just to get beyond

Vagina...isn't that the capital of Saskatchewan?