Forums: Science And Math
Email this Topic • Print this Page
Reply Sat 21 Oct, 2006 08:31 am
On the History Channel they were talking about satellites and said that space junk (space debris) could be a hazard to orbiting satellites and space shuttles, etc., if they collided. They mentioned that even a tiny paint chip, travelling at 17,500 mph, for example, could be dangerous if it collided with a space shuttle.

I've always thought that these orbiting objects were actually stationary. In other words, they are not being propelled at a high speed, but they are merely "falling" or dropping off in orbit around the curvature of the earth and remain stationary. That is to say, astronauts inside the shuttle are not actually travelling at 17,500 mph, instead, the earth is rotating or moving underneath them at at a high speed.

As a layman, I thought I had all this figured out, until they pointed out that a chip of paint, travelling at 17,500 mph could pose a hazard. Now I'm curious as well as confused and would appreciate any clarifiation.

Type: Discussion • Score: 1 • Views: 1,378 • Replies: 13
No top replies
1
Reply Sat 21 Oct, 2006 08:39 am
The junk up htere and the crafts are all moving at different speeds and altitudes. Some are orbiting the earth, some are at fixed points (and therefor moving in space anyway) I don't think anything is just standing still.

A launched craft could cross pths with an orbiting bit of debrit, an orbiting craft could collide with a slower or faster piece of debrit at the same altitude.
0 Replies
1
Reply Sat 21 Oct, 2006 09:03 am
"Stationary" objects are only "stationary" with reference to fixed points on the planet--that would be objects which are or derive from objects which once were in geo-synchronous orbit. Even that is not reliable, because of a little thing known as entropy.
0 Replies
1
Reply Sat 21 Oct, 2006 11:23 am
easyabc,

Earth's gravity causes acceleration of foreign objects towards the direction of Earth's core. If you were to place an object that is stationary relative to the sun near to the Earth, then Earth's gravity would suck the object into a direction collision course.

To remaing in orbit, then, it is clear that the object must be travelling fast. For any specific distance from the Earth, the orbit must be an exact specific speed if it is in perfect orbit. The closer it is to Earth, the faster the orbit has to be because the tug of gravity is stronger.

So the Earth is rotating, and completely independent of the Earth's rotation, there are objects orbitting around Earth. These are satellites.

An object that is in a particular orbit level will be stationary to other objects in that orbit level because they are all travelling the same speed. But when the object moves closer or farther from Earth, it can get into the range of things moving a different speed that could hit it.

If an object is in orbit and something causes it to slow down, such as a collision, then all of a sudden gravity gains advantage and knocks it down closer to the Earth. This might just move it into a lower orbit, or it might cause it to crash. This is an example of how an orbitting spacecraft could be hit by orbitting debris.

There are also tiny asteroid particles flying about in space that could hit it.

There are also cosmic rays, which are broken up hydrogen nuclei from stars in other solar systems that are constantly shooting through our system at extremely high velocities/energies. These are everywhere, they go through everything -- it takes more than 6 inches of solid steel to stop them. For astronauts in space they are constantly being hit with cosmic rays that slice up their DNA and will eventually kill them. The only thing that protects us on Earth is our atmosphere, because the cosmic rays collide with atoms and degenerate in cascades of gamma rays.
0 Replies
1
Reply Sat 21 Oct, 2006 12:04 pm
I had posted this in the duplicate thread that got pulled but... Along the same line as other's have said:

What is "stationary"? IOW, stationary as is relative to what?

If a satellite is geo-stationary and there is another object (space junk) that isn't, then they are both "moving" relative to each other. Space junk that manages to fall into a geo-stationary position would be "moving" relative to the space shuttle which isn't usually in a geo-stationary orbit.
0 Replies
1
Reply Sat 21 Oct, 2006 02:49 pm
yeah, and an orbit would become geostationary if it's orbit period was equal to the planet's rotation period (making it geosynchronous) and then it would also have to be orbitting in the plane of the Earth's equator so that it wasn't spiraling around the planet like an orange peel.

imagine two satellites with the same orbit period, one rotating around the x axis and the other around the y axis; if they collide, the difference in speed is equal to the full speed of either one!
0 Replies
1
Reply Sat 21 Oct, 2006 03:06 pm
Easyasabc,

First of all, your question is a good one. You have obviously understand the basic Physics.

What Easy is getting at is that all objects in circular orbits that are the same distance from the Earth, will have the exact same speed and follow the same path (their mass is irrelevant). Easy is absolutely correct that to us they are going the same velocity, and compared to each other they will in fact be stationary.

But, you are all missing the real problem. Not all orbits are circular

If you knock something from a circular orbit, it will usually start to follow an eliptical orbit (an ellipse is an oval or a squashed circle). In an elliptical orbit, the distance between the object and the Earth changes (and the object goes faster the closer it is to the Earth).

Another complication is the way you move a satellite or spaceship passes though many elliptical orbits to get to their final circular orbit (each time they apply thrust, they change to an new orbit). At any time in the process of getting to your desired orbit, you could collide with other objects in a circular orbit.

Space junk may be thrown off a space ship in any direction, at any time during the launch (i.e. while thrust is being applied) and so it may start out in an elliptical orbit. As stuh said, other factors can also change a circular orbit into an elliptical one.
0 Replies
1
Reply Sat 21 Oct, 2006 03:14 pm
Quote:

actually nothing can be knocked out of orbit completely, they are simply knocked into a different orbit

Well, that's true only in a 2-body system

But, you are all missing the real problem. Not all orbits are circular

Yes, in fact no orbit is really circular. Eccentricity is the measure of circularity (with zero being a perfect circle).

Tidal forces tend to reduce the eccentricities over millions of years which is why so many orbits are so close to being circular.
0 Replies
1
Reply Sat 21 Oct, 2006 05:09 pm
This is easyasabc who started this thread.

I thank everyone for their responses and answers. I now have a much better understanding of the subject. Before asking the question I tried to research it, at least a little, on the Internet, but the information wasn't exactly comprehensive.

When the space shuttle, for example, is in it's proper orbit, and travelling at 17,500 mph, are thrusters being used to propel it and maintain it at a constant speed of 17,500 mph? A dumb question I know. But I had always thought that once the space shuttle is settled into its designated orbit, it no longer required any power or propulsion (except for minor thrusts to make small adjustments).

In other words, if the shuttle is not being thrusted or jet-propelled along, why is it moving at 17,500 mph? What makes it move at that speed?

Thanks again. easyasabc
0 Replies
1
Reply Sat 21 Oct, 2006 05:17 pm
Theoretically the shuttle once it is put in an orbit (the word "settle" is very misleading) it stays there. It is better to think of it as once the thrusters turn off, it stays in the orbit it was in at that moment.

Yes, any object will (theoretically) stay in an orbit indefinately with no need for thrusters. In fact as soon as you use a thruster in any direction you by definition leave one orbit... and when you turn tham off again you will find yourself in a different orbit.

I am using the word "theoretically" because an object will stay in an orbit only if there is no force applied to that object other than gravity from the central body. In real life there are tiny forces (including tidal forces and matter etc.) which means that objects in orbit often change (and some eventually crash back to Earth).

But the real world is very close to the theoretical one, and the space shuttle, once in the desired orbit can turn off all engines except for an occasional course correction.
0 Replies
1
Reply Sat 21 Oct, 2006 05:48 pm
The law of conservation of momentum tells us that objects in motion tend to stay in motion (in the same direction), and objects at rest tend to stay at rest. Therefore, all objects tend to move in straight lines. The only time an object moves in a curved line is when it is being continuously acted on by a force. Gravity always accelerates objects, but acceleration does not always change speed, because acceleration is the change of velocity and direction is a component of velocity. So for a spacecraft in orbit, it is being continuously accelerated by gravity, and this acceleration is just the right amount to change it's direction without changing it's speed. So, since objects tend to keep moving, and the acceleration due to gravity is not slowing down the object, it will keep moving the exact same speed.
0 Replies
1
Reply Mon 23 Oct, 2006 08:55 am
easy, what you have to remember is that the only reason things slow down here on Earth, is because of friction. Air, the ground, it all has friction, which creates heat energy. As energy cannot be created or destroyed, the energy that keeps it going is lost.

In space, you'll be hard put to find air of any kind.
0 Replies
1
Reply Mon 30 Oct, 2006 06:22 am
And only satellites above the equator at a height of 35,786 km can be in geosynchronous orbit, and there's only about 300 of them amongst the thousands of functioning satellites in space. You can see their track here http://science.nasa.gov/Realtime/JTrack/3D/JTrack3D.html

Gear breaks down in the harsh environment of space, and space isn't totally empty; you have upwards of 2 hydrogen atoms per cubic metre. It may not sound like much - but when you are travelling at 17,000 - 35,000 metres a seconds, that's upwards of maybe 40,000 collisions a second, every second for years and that does slow objects in space and drop their orbits closer to Earth - its a real phenomina for engineers to worry about.

But this thread is about collisions. Not all satellites are heading in the same direction. If a rivet or screw or even a spec of material falls off a spacecraft going NE -> SW at 7 km/sec and hits a satellite travelling NW -> SE at 5 km/sec you'll have quite a destructive impact.

In fact there is an issue covered in many Astronomy magazines and their is even an animae DVD series out about this - Planetes - about folk in space who's job is to clear the spacelanes of steller flotsam! http://www.ascully.com/modules.php?name=Reviews&rop=showcontent&id=530 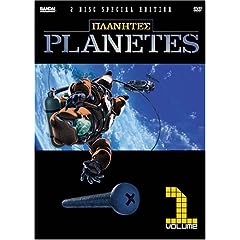 0 Replies
1
Reply Mon 30 Oct, 2006 09:19 am
Last week I talked to Edgar Mitchell (Apollo 14 Lunar Module pilot), and he mentioned that the module was being constantly bombarded by tiny particles. While they were walking around on the moon, too, their suits were being barraged by (nearly imperciptible) particles.
0 Replies