On the Montevideo... (from mecannoo.com)

0 Replies
1
Reply Sat 15 Jul, 2006 06:07 pm
royal ontario museum = we visited there last year .
i filled out a questionaire and told them NOT to adopt that design

you'd think they would listen , but no ... they go right ahead

!
imo they should have chosen a modern design that would 'blend in' with the old , rather than intruding on the old design - looks a bit like a spaceship landed on the ROM .
hbg
0 Replies
1
Reply Sat 15 Jul, 2006 07:03 pm
Shapeless wrote:

0 Replies
1
Reply Mon 17 Jul, 2006 04:49 pm
I am in the majority with Santiago Calatrava - the turning torso. It just looks cool.
0 Replies
1
Reply Mon 24 Jul, 2006 03:10 pm
Bit of a tangent - but I just ran across this article about the matter of how to make the connection between an old building and a new/different addition work, kind of what I was getting at about the Royal Ontario Museum addition.... it was the connection that bothered me as I didn't dislike the addition entirely.


A post of mine in Walter Hinteler's thread on La Phare (the Lighthouse), has a NY Times article on a skyscraper design for Paris, and one for St. Petersburg, with some photos - 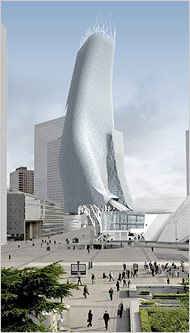 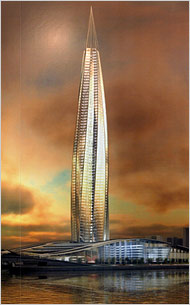 
Another NYT Link re the Gazprom project problems

Article in Chicago Tribune by Blair Kamen on design change for the new Calatrava spire in Chicago (known, it seems, as "the drill bit"

I'm also with osso about Chicago arthitecture. There are several I really love in Chicago, because they have "warmth" and style.
0 Replies
1
Reply Thu 7 Dec, 2006 04:12 pm
Part of the Gazprom project problem article - (see link above for the full article) -

0 Replies
1
Reply Thu 7 Dec, 2006 04:23 pm
I'm glad I'm not the only one who finds the addition to the Royal Ontario Museum off-putting. It's interesting from a technical point of view; the national news did a story on how it was being built that I enjoyed. I don't think it's going to mesh with the neighbourhood when it's done, though.
0 Replies
1
Reply Mon 18 Dec, 2006 06:08 pm
More on the change in the Calatrava design for the Chicago skyscaper (some of use took a boat ride past the site for it last May) -

Lynn Becker calls the new version the "Licorice Stick"; Kamin said (if I remember correctly) that people are calling it the Drill Bit.


Ah, and here's an interesting blog on the choice, with photos to explain (including the Chrysler Building) -
http://edwardlifson.blogspot.com/2006/12/new-calatrava-design-for-chicago-is-bit.html
0 Replies
1
Reply Mon 30 Apr, 2007 07:06 pm
Hi everyone, I'm new in this forum

What do you think about this building? It's the Telecommunications Tower, headquarters of ANTEL, in Montevideo, Uruguay.

Clean, cool. I rather like it. Makes me do a mental jump to a toned version of Capitol Records in Hollywood, which was not near as sleek.

Let me introduce myself, as an instigator of threads like this, and not the only one. (Walter Hinteler, noinipo, ehBeth, realjohnboy, others with names slipping, and now you.)

I'm not a building architect, but I'm very interested in architecture. I'm a landscape architect, pay attention as I can to site design, urban or regional.
My knowledge is on the shallow/broad side, such as it is. I push for people to say what they think about the built environment, gut likes and dislikes. We who read this at all would be glad to see arguments from both designers and users of places.

Would enjoy seeing architects come on board here with particular points of view. Want to foster talk, a back and forth between design and people who live in it.

My second take on this building is... sleek as it is, I don't know how green it is, and that is a matter gaining more attention in a variety of places, with good reason. Maybe it is sleekly green.

I'm also not That interested, in that it seems a safe corporate design.
I say this at the same time I personally am tired of fulminating titanium exploding near waterways.

How's that for a reaction? are you involved in the building?

How's that for a reaction? are you involved in the building?

Yes, and not just the building, which I think it's rather impressive, but once I got to go to the 22nd floor and it has the most amazing view of the sea.


Why do you like the building? Suppose you had the same view but the building looked different?
0 Replies
1
Reply Mon 30 Apr, 2007 09:31 pm
Because it's the first of its type. In Montevideo, many old buildings were declared national monuments (which mean it's illegal to tear them down or modify the facade in any way), therefore, a building with this design had never been authorized before since it didn't go with the whole style of the city. Modern architecture is more common in Punta del Este.
0 Replies
1
Reply Mon 30 Apr, 2007 11:10 pm
Ok, I can see that is both exciting and good for the city, and the building is good looking, even from the point of view of someone from a distance.

As many other cities have dealt with, it is difficult to keep old neighborhoods - which are newly appreciated as the cords of a city, and progressive builders clue in ... going at the same time.

Are you an architecture watcher, or in the building business, or outside of all that?
0 Replies
1
Reply Fri 6 Jul, 2007 01:21 pm
Looks like they're about to start construction on the Calatrava spire in Chicago -
http://www.chicagotribune.com/business/chi-wed_spire_0627jun27,1,1968501.story?ctrack=1&cset=true

On the Calatrava building, I'm not sure that is the last design, will have to check. In any case, it's phallic for sure.

On the Montevideo building, I'm not clear what elements in the photo are included in the building site, besides the main building; do you have any other photo links?
0 Replies