Is Boomer the New "N" Word?

Centuries of respect your elders culture.


And is there something wrong with respecting your elders, in general?

There is something wrong with the centuries old assumption that with age comes wisdom? That has been proven over the millennium to be on a case by case basis ... therefore the sentiment as a natural law for everyone to follow blindly? Made false.

No, wait. Someone did say ok boomer a couple of days ago to me here, and I didn't know that was a thing.

Go back and reread whatever that post is. I bet it's 100% ironically being used there (no context needed).

1 Reply
1
Reply Wed 20 Nov, 2019 10:38 am
@tsarstepan,
But that doesn't answer my question as to whether there is something wrong with respecting your elders, in general.

Also, yeah, I did look up what I said that prompted "ok boomer"

Yes context is needed tsar, because (ironically) it was in a thread started by you, where some people blew up at you because you used the word "holocaust" in a completely ironically way.

The "Ok boomer" was used towards me because I was, in part of my response, agreeing with and standing up for you, and that I also pointed out someother "come to jesus" stuff. Like why what sauce for the goose doesn't seem to be sauce for the gander when it comes to bad things happening to everyone, regardless of age or life situation.

So context is everything. When said to me in this case, it wasn't used ironically, it was used, among other things, to dismiss the very same exact life experience that poster had.

I said nothing about wisdom. There are people of every age that are dumber than a box of rocks. You can still respect them.

Something I know is not wise is, as every generation has done, come up with the idea that those older than them are mindlessly stupid, and should step the **** aside.

As I said in my last post, Nothing New Under the Sun.

Personally, I think the whole boomer, millenial, genXYZ alpahbet thing, is stupid as ****.

It does nothing but keep people from communicating with each other. It throws up and immediate barrier of "us against them"

Can't remember what it was about, but at one point the person being interviewed said, "When was the last time you changed your mind about something, because someone screamed at you?"

When was the last time you changed your mind about something, when others, especially under the guise of bullshit irony, called you names meant to be insutlting?

How is anything supposed to be advanced between or among people, with all the screaming and name calling?

Believe me, I'm not exempting myself from that.
Since I heard that person say that, I have thought mightily on it, and worked on improving myself.

But that doesn't answer my question as to whether there is something wrong with respecting your elders, in general. 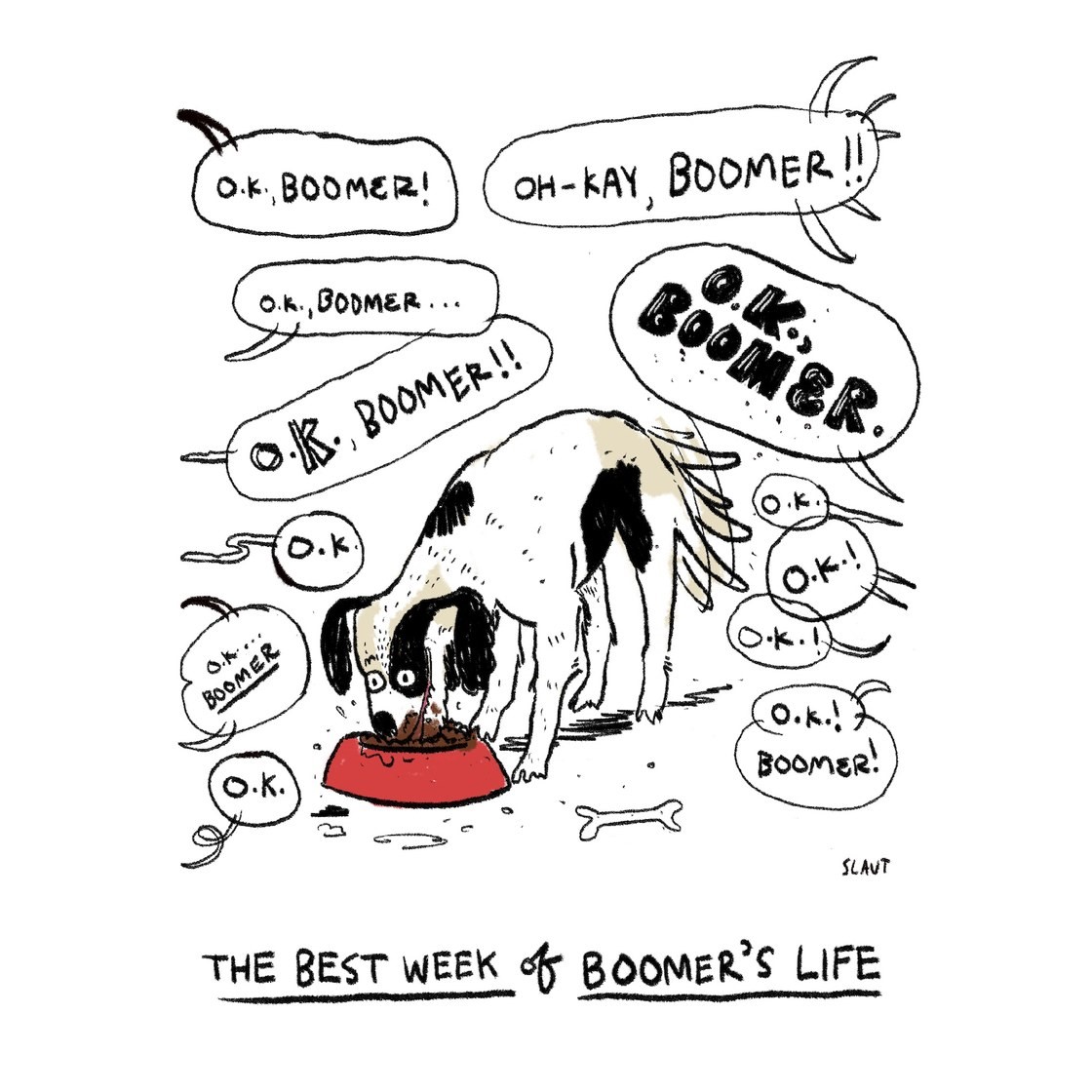 Very much agreed. So why are we (in general) calling each other things meant to be disrespectful?


Probably because these tend to be done over the internet via social media and such where you are being mean to someone you do not see - I doubt many of these people would say such things to someone in person.
1 Reply
1
Reply Thu 21 Nov, 2019 10:28 am
@Linkat,
Fellow IMDber taking the piss out of the term with a timely IMDb poll.
OK Boomer

0 Replies
2
Reply Mon 6 Apr, 2020 08:00 am
'Boomer' is very much a victim of 'the meme effect'.
0 Replies
3
Reply Mon 6 Apr, 2020 09:35 am
I'm older than boomers. I guess that makes me "wise?" "Senile?" "Responsible for the world's ills?" "Too old to understand modern problems?" My one comment is, I came from a mix of a hopeful time and a time of subversion. It was the best of times; it was the worst of times. Roosevelt installed a social safety net he intended to expand to cover universal health care and relief for the needy poor. After he died, the follow up was ignored. His New Deal almost immediately began to erode. The rest is a glorious tableau of greed and incompetence, leading to a nation in sad decline, despite being the richest nation ever.
1 Reply
1
Reply Tue 7 Apr, 2020 03:40 am
@edgarblythe,
Quote:

Or was wildly successful, depending on POV.
0 Replies