SUMMARY: Ellen has a cruel nature. Despite her deliberate and seemingly desperate efforts to seem like the nicest person in the world, she'll never be "nice", not in the true sense of kindness. It's good to finally know a person's true colors. "Good" and moral people can choose to skip Ellen now that's she has revealed herself.

I've always felt uncomfortable with Ellen's obsession with scaring people, like she has a serious screw loose being insatiable with it, and, I feel, quite a degree of presumptuous insensitivity to others. I wonder if any of her "scare victims" ever challenged her with the remote possibility that someone can die from being scared by someone. Her scaring of guests is to satisfy her own indulgence. I doubt that many people would be thrilled with their scares. My wife told me a story about how a little girl in her neighborhood actually died of shock after being scared by someone.

Sure, Ellen, it's nice to be nice to anyone, but a moral person chooses their friends VERY carefully. If Hitler was still alive (he'd be 130) and one visited him in his cell for life (in my no execution reality), one should be nice to him; it wasn't his fault what happened; he never asked his mommy, "Mom, can I be a mass murderer when I grow up?".

To be friends with a criminal is basically to be a criminal. "People are known by the company they keep".

Being nice is one thing. Being friends with a war criminal like Dubya shows a serious "hole in your soul", Ellen, more precisely, that you do not have a soul, which is no surprise, because very few of us do.

I understand the attraction to George, because I like him too despite his major deficiencies. He's even got a sense of humor. But I wouldn't shake his hand for a million dollars.

Ellen, you are an airhead, and that can be unchallengingly pleasant if one wants to keep one's mind in neutral for a while.

I don't agree with Mike Figueredo, who implies that George W. Bush or Ellen aren't worthy of others' kindness, but I understand. It's not great to imply that there are some people who don't deserve forgiveness; to be unable to forgive anyone, even Hitler, is bad for the one who can't forgive. Forgive for yourself, but know that a war criminal's sins are NEVER forgiven by God/Nature because the criminal calls down the full bad karmic penalty.

A moral person who discriminates good and evil rejects the close company of immoral people because they know they can never share the eternal damnation of the wicked. A moral person will never be a "friend" of a wicked one, and will be horrified at the thought of holding a "bad" one's hand in their last moments.

For "classholes" it is evident that the unreal bond of loveless and soulless money ensures they all go to their eternal damnation together.

The pic of Dubya and Ellen, two "nice" airheads reminds me of a photo of a smiling co-ed group of mass murderers at Auschwitz. The wicked can look amazing too, and can be talented at faking the happiness/love they even know they can never have.

She does as she wants and she says what she wants.

THIS WILL NOT DO IN UTOPIA!

The problem with Ellen is that she is full of herself.

She does as she wants and she says what she wants. 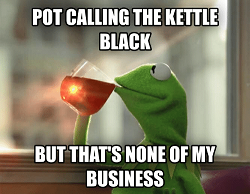 i am saying that hawkeye is Ellen-like, according to his evaluation of her personality...
0 Replies
3
Reply Wed 23 Oct, 2019 08:30 pm
@Luxin,
Has she disinvited you, or why are you coming up with such trivial clichès
to discredit her? You obviously don't know her personally, you make an assumption through your TV screen and you might buy a new one - yours is pretty old and clouded.
0 Replies